There are a lot of schematics online for high side switch latching using a p-channel mosfet or PNP transistor, (I) couldn't find any for low-side so I tried to design my own:

I want to when output of op amp goes high mosfet stay "on" even when the op amp output goes low until SW3 is pressed. the circuit kinda/sorta works in a crude simulator but there are two problems:

First; When op amp output goes low from high, mosfet gate voltage reduces to ~2.5V even if I disconnect Q1 emitter from Q2 collector and connect 12V supply to Q2 collector. obviously because the base is at 2.5V...

Second; I want to use a normally open push button instead of normally closed.

How can I solve the described problems? is there a better approach to do this? 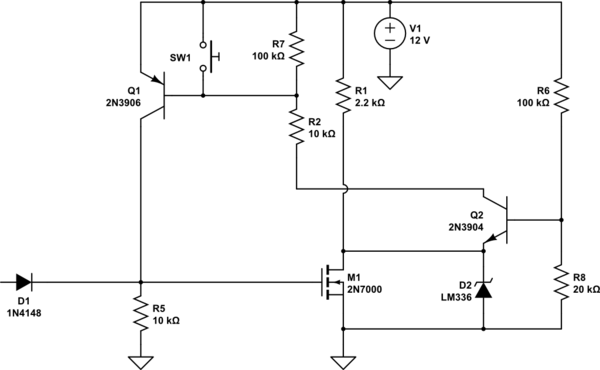 Presumably your 100nF cap is intended to force it to an 'ON' condition when power is applied. You can add that back, but it would be good to add a 1N4148 diode to prevent breaking down Q1 E-B.

When the emitter is pulled down to close to 0V, then Q2 conducts, turning Q1 on and thus M1, positive feedback.

Pressing SW1 turns Q1 off so that the feedback loop is broken, and the output state depends only on the comparator state. If you want SW1 to turn M1 off regardless of the comparator you would do it a bit differently.

Edit: To have the switch override the comparator you could add a series resistor such as 10K to the gate of M1 and short the gate to ground through the switch.

A couple of folks have suggested using logic functions. To make the decision whether you can use a standard logic function such as a flip-flop or a cross-coupled pair of gates there are a few considerations:

Either way it's certainly possible, just with different trade-offs.

You can save yourself a lot of headache by using digital chips for digital functions. You can use an SR latch here, or a D flip-flop with a RESET input.

Also using a comparator with open-collector output in place of the op-amp allows you to eliminate the diode from your design. It also eliminates the need for a negative power supply (assuming the actual input voltage range is 0 - 2 V as shown in your schematic) 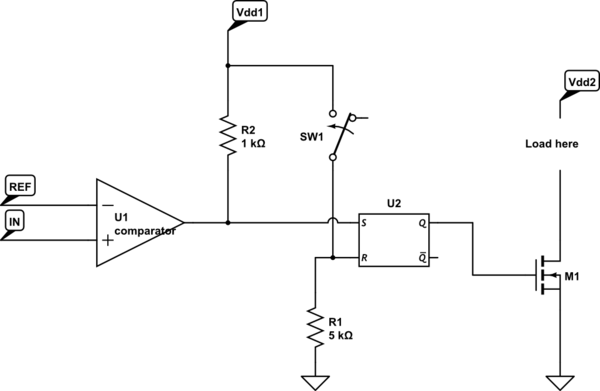 Practically you might find it easier to source an \$\bar{S}\bar{R}\$ latch (i.e. with inverted inputs) --- then you'll have to swap around some connections to make things work.

The really old school way of latching, using relays and predating modern electronics, was called a "seal-in circuit". look that up. you can use the same principles with transistors. Very little benefit to this however, since you can often get standard logic gate latch chips, in logic families that work at higher voltages already available in your system.