I understand that using a ferrite bead attenuates high frequency currents and can help reduce EMI. However, I'm confused about how to select the frequency range that should be attenuated. For example, is this a function of the frequency range of currents that the load IC will draw from the supply? If so, how does one go about determining this frequency band?

Or is the bead more about suppressing currents that are picked up from interference from other devices? Again, if this is the case, how does one determine what frequency band requires attenuation?

I understand that using a ferrite bead attenuates high frequency currents and can help reduce EMI. 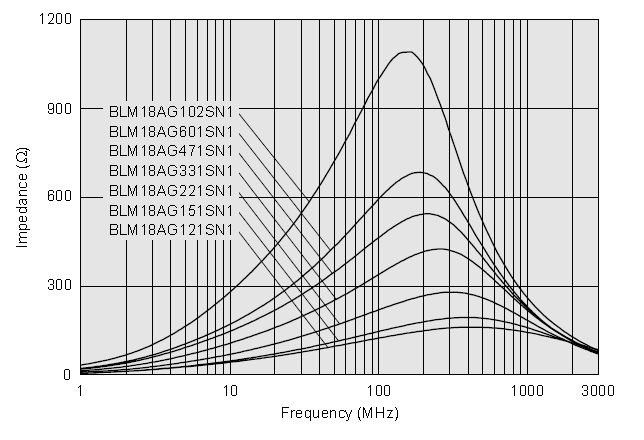 Their choice depends on your application and what you want them to do. You have to decide why you are contemplating using a ferrite bead. That comes first i.e. what is the problem that makes you think a FB is required? Start with the problem you are trying to solve.

Here's a good article on FBs produced by Analog Devices Inc. Here's its equivalent circuit as shown in that article: -

And here's another section of that article that details the impedance properties of a TDK MPZ1608S101A and 10 nF shunt capacitor. It shows different scenarios of connecting them with a damping resistor should the low frequency resonance be too problematic: - 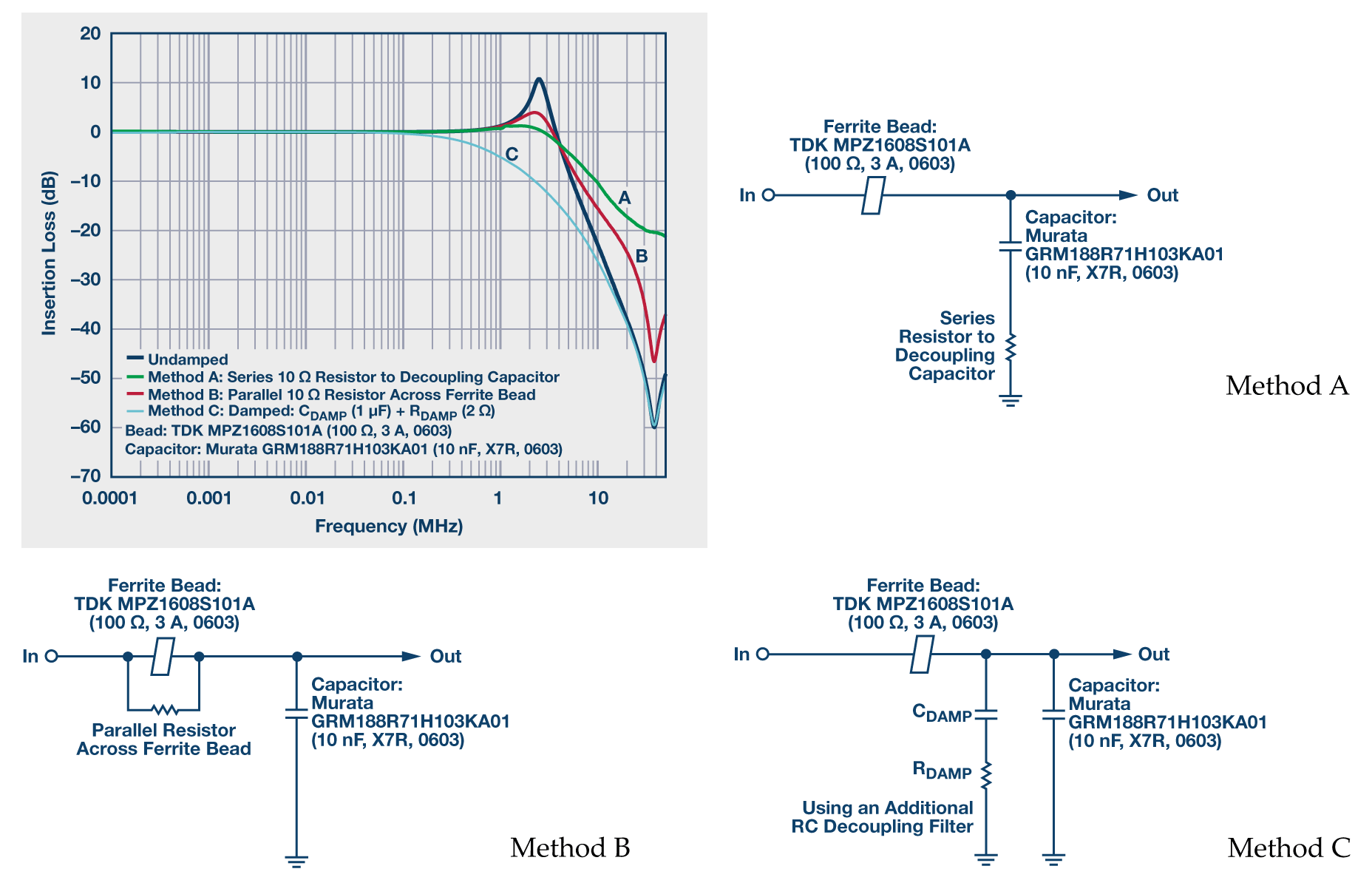 how does one go about determining this frequency band?

I'm confused about how to select the frequency range that should be attenuated.

is the bead more about suppressing currents that are picked up from interference from other devices?

A ferrite bead is a lossy inductor, ie a conductive coil (or straight wire) with ferrite magnetic core material inside/around it.

Like every inductor, its impedance curve has two parts that form an inverted-V shape:

Like every inductor that has a magnetic core (not air) its properties depend on the core material properties, which also depend on frequency. The typical inductor you'll find in a DC-DC converter has a core optimized for low losses. Ferrite beads are optimized for high losses. The material has high hysteresis. This means it turns high frequency current into heat. This important property allows a ferrite bead to be much better at filtering high frequency noise than an inductor, because it stays lossy even above its SRF. So in case you wonder, this is why inductors and beads are two different components.

Here's an impedance graph for a bead:

I understand that using a ferrite bead attenuates high frequency currents and can help reduce EMI.

What it really does is add series impedance wherever you put it in the circuit. On the example above, on the schematic on the right:

Note this LC lowpass filter can ring, as shown by the peak on the transfer function graph.

If you think in terms of impedance and current/voltage dividers then it's much simpler: this LC filter is a current divider when you consider the input is load current and the output is noise current injected into the supply, and the same LC filter is a voltage divider when you consider the input comes from power supply noise and the output is at the load.

Thinking in terms of current/voltage divider also avoids the mistake of thinking the ferrite bead does the job alone while forgetting about the cap.

You can guess by considering digital chips will produce noise at harmonics of the clock frequency. Faster rise times mean more harmonics. Or you can plug a spectrum analyzer and have a look.

Not the answer you're looking for? Browse other questions tagged power-supply ferrite-bead or ask your own question.

2
LC filter and ferrite bead
2
Ferrite Bead: How much impedance do I need?
0
Is a snap on ferrite bead suitable for USB Arduino programming and charging
5
Should a ferrite bead be placed close to the MCU or close to the power supply?
0
What happen when we parallel or series ferrite bead?
3
How lossy is a ferrite bead in its "capacitive" regime?
1
Burned component on GIGABYTE RTX 2080 GAMING OC 8G