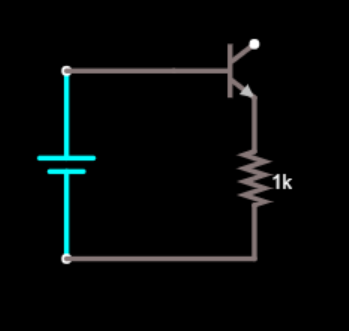 What will happen when the collector is disconnected? Will the base current change from 10 to 1010mA? In other words, can we say the emitter current is solely determined by the base configuration? In this case it is V_BB-0.7/1K (assuming the transistor is not operating in the breakdown region).

The emitter current is (Vbase - 0.7)/1k with or without the collector connected to a positive supply voltage (assuming the battery has zero internal resistance).

With the collector connected, this emitter current will be split in the ratio of hFE (beta) between the base and collector.

To complement James' answer, it might be helpful to approach the open collector condition by gradually increasing a collector resistance connected to a positive power supply. 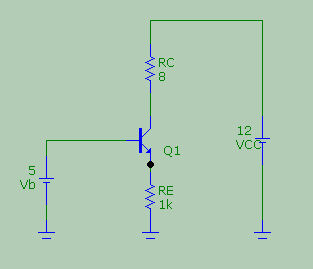 Here I have used a reasonably small Vb and an initial value for Rc that won't cause the transistor to fall into saturation. With these values, we set the emitter current via Re to the (approximate but reasonable accurate) value of (5-0.7)/1k = 4.3 mA, which will give a nearly equal collector current through Rc. Voltage drop across Rc=8 ohms will be a handful of mV and Vce will be nearly 7.7V. The transistor is in active zone and hFE is the full value 200, so Ib needs to be only 20 uA. Basically, all the emitter current is due to the collector current.

When we increase Rc, the transistor will do its job to keep the current in Rc almost constant as long as it stays out of saturation. But we cannot force 4.3 mA forever into increasing values of Rc. At one point the voltage drop caused by Rc*4.3mA will exceed the supply voltage minus the voltage drop across Re. The transistor cannot drop Vce under zero volts - actually it will reach 0.1V or so, so the maximum value of Rc for which we can pull the current 'programmed' via Ie is about (12V-4.3V)/4.3mA = 1.8 kohm (rough estimate).
After that, we will assist to the demise of the transistor action, and the reinstatement of Ohm's law in all its glory.
Increasing Rc will decrease Ic as in (Vcc-fixed value)/Rc, and we can see this trend in the following graph

The decrease in the ratio Ic/Ib is reflected by the forced hFE that characterize saturation.
Since Ie is roughly set by the BE mesh, the decrease in Ic will be associated with a corresponding increase in Ib. In the limit for Rc->infinity, all the emitter current will have to be supplied by the base.

We can try to visualize how this plays out on the output V-I characteristic of the transistor if we acknowledge the fact that being Ie constant, the term Re*Ie is also constant and we can subtract it from the expression of the load line. As Rc varies we will see this set of curves 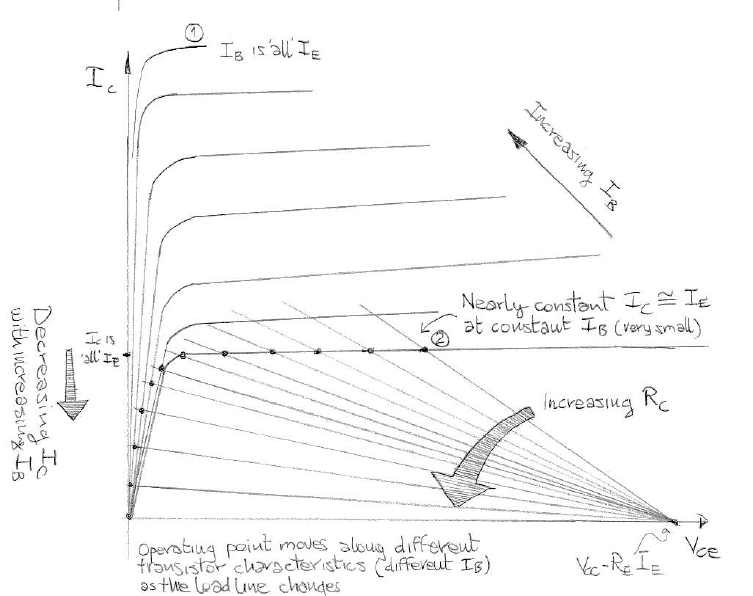 where the operating point, intersection of the output characteristic with the increasingly tilted load line, is seen moving from the active region into to the saturation region, down to the point where Ic = 0 and all Ie is contributed by Ib. Notice that we are crossing characteristics here: we do not stay on the same Vce-Ic curve for a fixed Ib as would happen with a common emitter configuration with base limiting resistor, but as Ib increases, we move to different characteristic curves.

A comparison with the CE configuration will be given in your other question: BJT current distribution.

You're correct; in this case the base current would change. With the collector source added, assuming a collector resistor is also added, this would become what's known as a common-base amplifier, unusual at low frequencies but a common sight in RF electronics, at least those circuits that still use BJTs.

This answer originally said the exact opposite, because I am apparently too tired and misread the circuit; I thought there was a base resistor.

Тhe answers so far are perfect but specific; they explain how the circuit is made. For the true understanding, however, this is not enough. It is also necessary to explain why (for what purpose) this was done in this way and to consider its applications in practice. I will try to satisfy this need with my answer below.

I was pleasantly surprised to see that someone, willingly or unwillingly, came up with the same idea as me many years ago when I used it to make a battery backup power supply. It is based on an inherent BJT property sometimes causing strange problems - when the base-emitter junction is fully on, it actually connects, like a forward biased diode, the base to the emitter... and the input voltage source is directly connected to the emitter. This situation can happen in an emitter follower (such as here), if the emitter ceases, for some reason, to follow the base. Usually, this is an undesired situation but there are also its useful applications like in the link above.

So, the OP's question is about an emitter follower considered in two situations - without supply voltage ("damaged") and with supply voltage ("restored"). Considering them one by one, we can explain the meaning of this circuit when used as a buffer.

I will use two figures from the link above to illustrate my explanations. There the invisible electrical quantities are visualized as follows. Voltages are represented by vertical segments (voltage bars) with proportional height in red. They are summed (subtracted) geometrically, according to KVL (this clearly shows the relationship between voltages). Thus the set of voltage bars on the circuit diagram can be considered as a snapshot of the voltage relief. Current paths are shown by closed lines (current loops) starting from the positive terminal of the power supply and ending at its negative terminal. Current magnitudes are hinted by the line thickness.

If there is no supply voltage (the collector is unconnected), there is no emitter follower since the transistor is not a transistor but rather a diode - Fig. 1. Only its base-emitter junction is used as such a "diode"... and the input voltage VB is transferred directly through it to the load in the emitter (the 1 k resistor in the OP's picture). 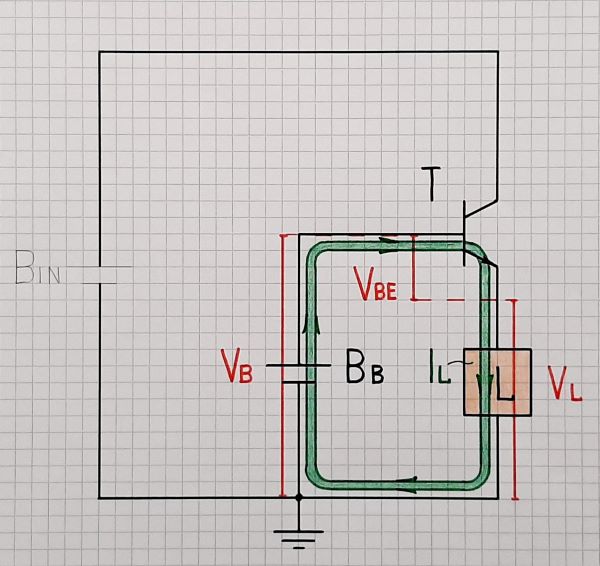 So let's restore the supply voltage (connect the collector) - Fig. 2. 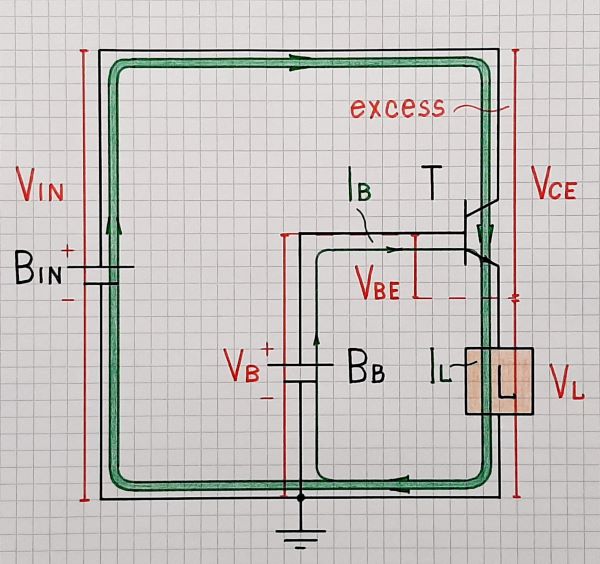 The transistor "becomes a transistor" and begins acting as a device with negative feedback... or as a "being" implementing some goal. "Seeing" the significant base-emitter voltage, it begins increasing its collector current (IL) so the voltage drop across the load (VL = IL.RL) increases. Since the base-emitter voltage is a difference between the constant input voltage VB and the increasing output voltage VL, it begins decreasing (VBE = VB - VL)... and finally the equilibrium is reached by the negative feedback. VL will be (slightly) higher than in the case of the "damaged" follower; so the load current (IL = VL/RL) will be slightly higher as well.

Now let's look at the situation from another perspective. The transistor passes its collector current through the load in parallel to the base current thus "helping" it. The input battery provides only the small base current needed to set the beta times higher collector current and, accordingly, the load current needed. As though, the battery tries to supply the load by injecting the small base current through the base-emitter junction to the load... and the power supply, by the help of the transistor, "helps" it by adding beta times bigger collector current. Figuratively speaking, you can think of the collector-emitter part as a "big brother" that helps the "little brother" (base-emitter junction:) This metaphor can help to intuitively understand the main idea behind the emitter follower used as a buffer.

Not the answer you're looking for? Browse other questions tagged bjt emitter-follower or ask your own question.

3
How is possible that with same Ibase there is more than one Vce?
-1
BJT current distribution

11
Art of Electronics: Emitter-Follower Zout
1
Relaton between IB, α and ICO near cut-off region for a bjt in CE mode
0
Why are the considered signal and current input of common base and emitter different although both take \$V_{EB}\$ as input?
3
Why is the common emitter input insensitive to base width modulation?
3
Why Emitter current increases with increase in collector to base voltage in common base configuration of a BJT?
3
Why is Ib proporional to Ic in a bipolar transistor?
0
Why does collector current increase with base current in BJT?
3
Why do not we use always current signal sources for BJT amplifiers?
0
Calculating base current without knowing current amplification
0
Emitter Follower / Common Collector as Negative Feedback Amplifier