I have built a tube furnace like the one in this video: https://youtu.be/YRZ7aQlqetE

The person in the video is able to reach 1100 C using an AC power supply. In summary, the furnace was made by wrapping an alumina tube (30 mm diameter) with ~7.6 meters of 22 gauge nichrome 80 wire, coating the wire in Dap furnace sealant, then finally wrapping the whole thing in two layers of alumina blanket. The furnace is controlled by an Auber Instruments SYL-2342P PID controller and a Holdwell 45GG20AF 2 pole 40 amp 120V coil contactor. There is a K-type thermocouple inserted into the tube. The diagram below depicts the wiring of the system, minus the alarms and the fuse. 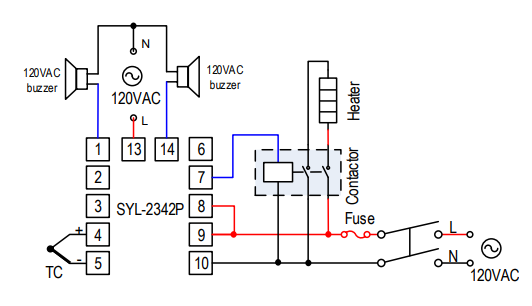 The controller is programmable, and I programmed it like this:

Here's the problem: when I run this program, the furnace will hear up until about 1325 F then the temperature increase rate will slow dramatically until the controller stops the program. I am not sure if this is a problem with the furnace or the controller. Any help would be appreciated.

If the contactor does not drop out then the problem is entirely with the heater/oven, assuming your temperature readings are accurate. All the controller can do is run the heater at 100% duty cycle.

At 1325°F (~700°C) you can estimate the temperature visually, it would be dull red roughly. That should confirm the thermocouple reading.

Nichrome increases in resistance with temperature, and heat loss also increases so you may have to increase the wattage and/or decrease the heat loss.

Your discrepancy is relatively substantial. I did not watch the video, but if you are emulating what was done fairly closely, I wonder if you are using 120VAC and the YT gent is using 240VAC. That would be 4:1 difference in watts and could account for the difference in performance.

Edit: Briefly looked at it and it seems like the YT video used a similar length (he says) of AWG 22 wire and is also operating from 120V according to the comments. It does not appear to be an electronic problem. There is nothing wrong with your circuit diagram.

Please confirm whether the contactor is remaining on.

Note that according to @mkeith the video shows 1 hour to get to 1100°C, so it would not be able to ramp as fast as you have set and the controller may shut down as a result (could be a safety feature or simply running out of program time). This is a result of insufficient control authority (in this case, heater watts). In some kiln controllers I designed we would shut down if the loop stayed out of control for more than a certain time, which minimized the damage in the case of a shorted thermocouple.

Not the answer you're looking for? Browse other questions tagged pid-controller heater or ask your own question.