I have a mechanical switch that I'd like to use as a signal source for a digital input of a microcontroller. The switch is normally closed, and I'd like to detect the switch being opened as quickly as I reasonably can, while also removing the effects of mechanical bouncing as the switch is opened. That is, I'd like the very first edge of the input signal to flip the state of the output signal towards the microcontroller and for that state to be held for a given duration even if the input signal bounces for a while after the initial edge.

Here's an illustration of what I'd like to see on a transition from closed to open. I chose an arbitrary polarity for the signals, but any polarity would do for my application. 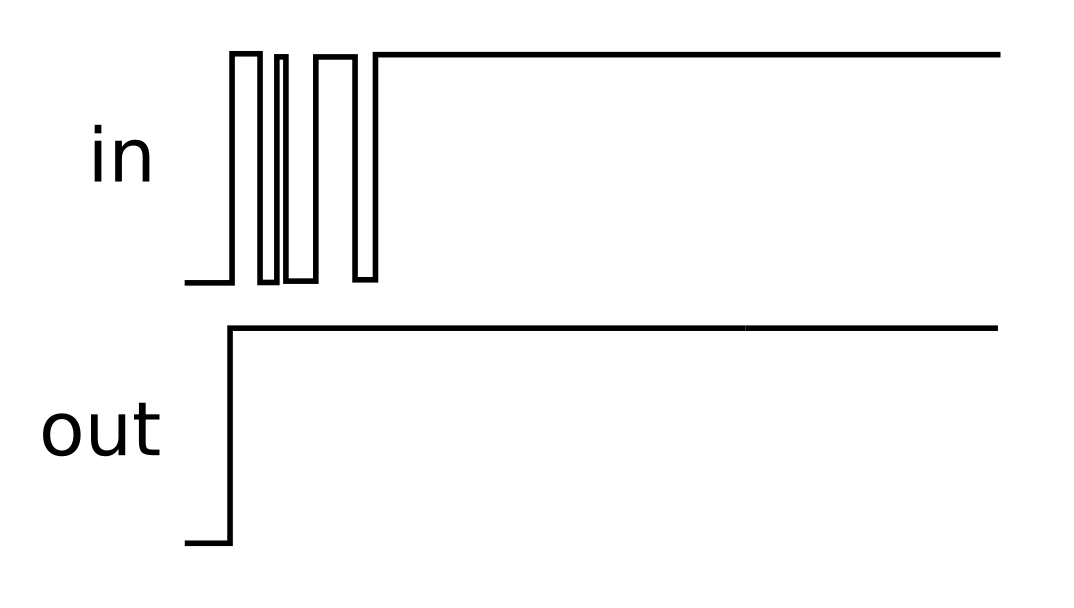 I'm not really concerned with accurately detecting when the switch gets closed again, so it'd be fine if the output state changing in that direction had a fair bit of delay to the input signal first changing.

For the steady state it'd be ideal if the output was different depending whether or not the switch is open or closed, but for my application it'd also be OK if the output went back to its idle state after not detecting an edge for a while, just as long as it's easy to make the duration it's held in the activated state as long as I need it to be.

I feel like this should be achievable with at most a schmitt trigger, resistors and capacitors, and maybe a diode, but I haven't quite managed to work out how to achieve what I need with those, so I'd appreciate any thoughts pointing me in the right direction.

If you insist on a H/W solution, a diode will make the charging/discharging of the cap asymmetrical. The delay will be a few microseconds. The recovery time will be a few milliseconds.

The best way to handle this is to debounce the signal in software with your microcontroller. This is cheap, simple, and gives you maximum versatility in terms of your debounce algorithm.

Notice how in the idle state the timer will reach zero, so when the switch flips, the debounced value will change imediately. The value will then be locked for 100ms.

Perhaps this is what you had in mind - it fulfills "a Schmitt trigger, resistors and a capacitor" and does not need a diode. When the switch is closed the capacitor is discharged instantly. Of course, "instant discharge" means theoretically infinite initial current limited only by the trace to the switch, so in practice you will want to limit this with another series resistor.

When the switch is opened, the capacitor charges through R1. Choose your component values to suit your taste. 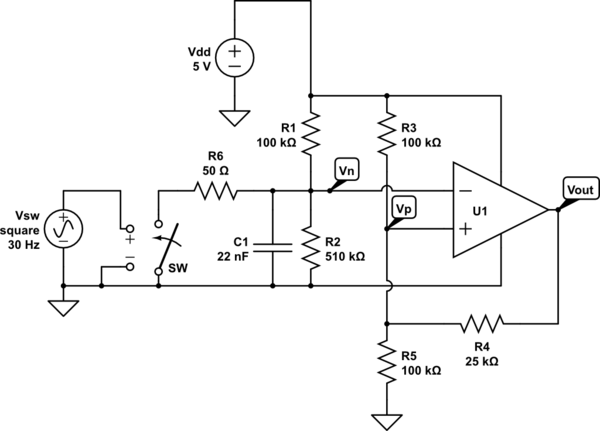 Not the answer you're looking for? Browse other questions tagged filter delay schmitt-trigger debounce edge or ask your own question.

2
Delay then off for tone signal
7
Debouncing by ignoring data?
3
convert falling / rising edge to pulses with minimal components
1
How do you pick component values for a debouncing filter?
3
Question about debouncing - delay of state change
0
How can I delay a digital signal
1
Not debouncing on a MIDI keyboard
0
WEMOS D1 R1 Interrupt repeats continuously, when triggered, Is it bouncing? How to fix it?
0
Two active-low switches, delay between the two