Is it possible for snow covering a car battery to drain the battery? [closed]

Ask Question
Asked 5 months ago
Active 5 months ago
Viewed 2k times
6
\$\begingroup\$
Closed. This question is off-topic. It is not currently accepting answers.

We had a snow/ice storm last night, and somehow the snow got into the engine area. Is it possible that the snow covering the battery was the case of draining the battery?

“cold” snow of unspecified density; in these studies, d.c. conductivity stayed within a surprisingly narrow range, from 9×10⁻⁷ to 4×10⁻⁶ Ω⁻¹ m⁻¹

conductivity increases by three orders of magnitude as temperature increases from —60 to — 10°C, and there is a sharper increase at temperatures above —10°C. The Tsuda, 1951 data (Fig. 28) show the rapid increase in conductivity that occurs as free-water content increases in “warm” snow. 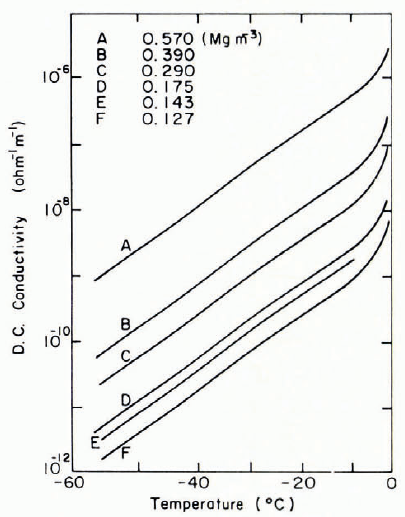 To answer your question,

It is possible but unlikely. The resistance of snow per meter, even when at close to 0 Celsius, is in the order of Mega ohms, unlikely to cause a more significant effect than the standby power consumption of automobile electronics and the self discharge of the battery. According to here https://shop.advanceautoparts.com/r/advice/car-technology/why-do-car-batteries-fail-in-winter

But as the chemical reaction occurs, the positive and negative lead plates are slowly coated with lead sulfate. This process is known as sulfation, and it reduces your battery's ability to hold a full charge.

It is more likely the temperature extremes exposed the problems on an already failing battery.

Water with impurities is a good conductor,  but snow is pure H2O, with a stable bond, and a poor conductor of electricity.  Factor in your positive terminal covered by a plastic cover with a plastic battery case.  So anything is possible, but not likely.

I live in a region with high winds and snow fall to hide cars in drafts or snowfall.  Getting snow under the hood is a common occurrence.  Never had a problem with dead batteries or starting car.

Possible? Yes, assuming that the surface of the battery was not completely clean and some of the snow melted.

Like John Doe answered, snow on top of the battery is unlikely to cause a significant drain, because the distance between + and - terminals is so large. Temperature sounds like a more likely explanation in this case. But for future reference, I'll add a bit more details of signs of water getting into electric circuits below.

If water and especially if water and salt got inside some connector or circuit board where the distance between + and - conductors is only a few millimeters, there could be significant drain. Snow is slightly conductive, but if the surfaces are even slightly warm it would melt into water and conduct quite well. Because the distance is smaller, the resistance is smaller and the current flow is much larger. This would however also cause visible damage to the conductors.

The amount of electricity in a typical car battery is around 100 Ah. In electrolysis, this would transfer 100 Ah / qe / Na = 3.7 mol of atoms. For copper that is 240 grams in ideal conditions. Even with practical losses, discharging a fully charged car battery through electrolysis would be enough to completely disintegrate the conductors, requiring replacement.

Usually it happens that the water evaporates due to the generated heat and the electrolysis stops before the battery is empty. Sometimes the deposited metal on the negative terminal creates a direct metal short-circuit, which could fully drain the battery or even cause a fire.

Of course well manufactured automotive electronics are protected against water ingress where insulation distances are small, so for this to happen the seals would have to be already broken.

Not the answer you're looking for? Browse other questions tagged batteries automotive water waterproof or ask your own question.

2
What's wrong with my UPS?
4
Is a solar panel clamped to a battery a drain on the battery at night time?
5
How good is the advice to run the car headlights before starting the car in cold weather?
1
Charging a car battery with two chargers simultaneously
0
Trickle charging a Li battery from motorcycle battery?
10
Possible battery solutions for 1000mAh capacity and >10 year life?
5
Improve a car battery's performance with capacitors
0
When jumpstarting a car, why do I need to wait a bit for the bad battery to charge a bit?