I have a circuit which input voltage shouldn't exceed 50 V, I can't use neither of available overvoltage protection circuits because of the limits each have;

Input source can be a battery or power supply of any kind (DC), input voltage shouldn't exceed 50 V and maximum current is limited to 10 A both by a fuse and design.

for example if the input voltage is 60 V and supply can only provide a maximum current of 5 A, that's 300 W on the SCR and fuse is not going to open.

That is simultaneously impossible; you can't have 60 volts across a crowbar if the crowbar has activated because the crowbar will clamp the voltage to 1 or 2 volts. So, at 5 amps that might be 5 or 10 watts but, it's more likely that it'll be much more current and, the fuse will blow.

How do I protect the input from overvoltage condition and overcome the problems described? is there a better approach?

Just simulate it and you'll see that the crowbar circuit has to clamp irrespective of what series resistance the incoming supply has.

That puts a different light on things. This device is a 10 amp thermal fuse that operates at 73 °C. If it were thermally bonded to the triac/SCR it should offer some protection against sustained thermal damage on the triac/SCR. The two wires will be in series with the normal 10 amp fuse.

There are probably other variants that "operate" at higher than 73 °C and, maybe you might be able to replace the 10 amp fuse directly if you look into it more deeply. 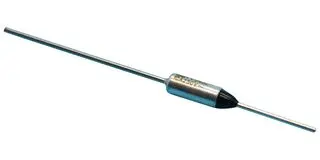 Not the answer you're looking for? Browse other questions tagged over-voltage-protection or ask your own question.

1
Working of the "Capacitor Reset" block