Further to a question I asked earlier, I realised that common ground confuses me. I have a USB powered Arduino and a separate Battery supply. The battery supply negative is connected to the Arduino ground. The voltage of each supply is the difference in potential between its two sides and my understanding was that you didn't need to worry what those actual potentials were, just the difference. But when you connect negatives surely the potential is important as the 2 potentials will now "average out" thus potentially (just noticed pun on proof read) changing the original voltages of both supplies.

The fact that it is okay to connect the two supplies means my understanding is flawed. Could someone please straighten me out ?

Section 7 of this document is basically what I'm doing

One key concept that might help in clarifying any misunderstandings is this:

When you connect the negative terminal of your battery to the ground of the Arduino, you are providing a reference value for the battery, relative to the Arduino. Thus, only while such a connection is made, the "positive" terminal of the battery is at a potential of "battery voltage" compared to the Arduino's zero level or ground.

The battery, or for that matter any arbitrary voltage, is relative to the reference you provide. It is a difference, from your defined base point in the circuit, not an absolute value, to reiterate the basic principle mentioned at the start here.

You are right that connecting a battery generates a difference in potential. There is no universal "0 V"; voltage is a relative measurement. When we talk about "5 V", we probably mean "5 V from the ground symbol on the schematic". If you connect one end of a battery to some other voltage, it will add its difference: 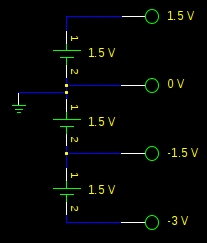 You only run into problems when you have batteries in parallel: 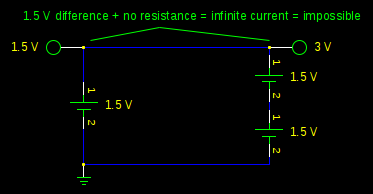 This situation can't actually occur. In reality, wires are just very small resistors, and what happens is that wire on the top gets very hot as a huge current flows through it, and it vaporizes. Or, the batteries aren't able to supply enough current to maintain their voltage and they go dead. In any case, something gets hot and breaks.

If the negative connections of both supplies are connected to a common conductor (ground) and the positive connections are connected to a common conductor ( V+) then any difference in Voltage will cause a current to flow. Assuming the USB is at it's correct 5V then if the battery pack is only at 4.8V the usb will try to charge it. If the difference is much greater then damage may be caused to the circuitry from high current flow, or the batteries from excessive charge rate. If the battery pack is over 5V, Without checking the specs for USB I can't be sure, but I would assume it was pretty well protected from minor overloads, so will have a diode stopping any reverse current flow. If both supplies were designed for the device, and can be plugged in at the same time, I would assume (provided the batteries aren't flat) it was safe to do so, but why would you want to.

Not the answer you're looking for? Browse other questions tagged arduino voltage ground or ask your own question.