Operational amplifier when the non-inverting terminal is open

What will be the output voltage from the opamp when one end (non-inverting terminal) is open? (For circuit see the attached figure.) 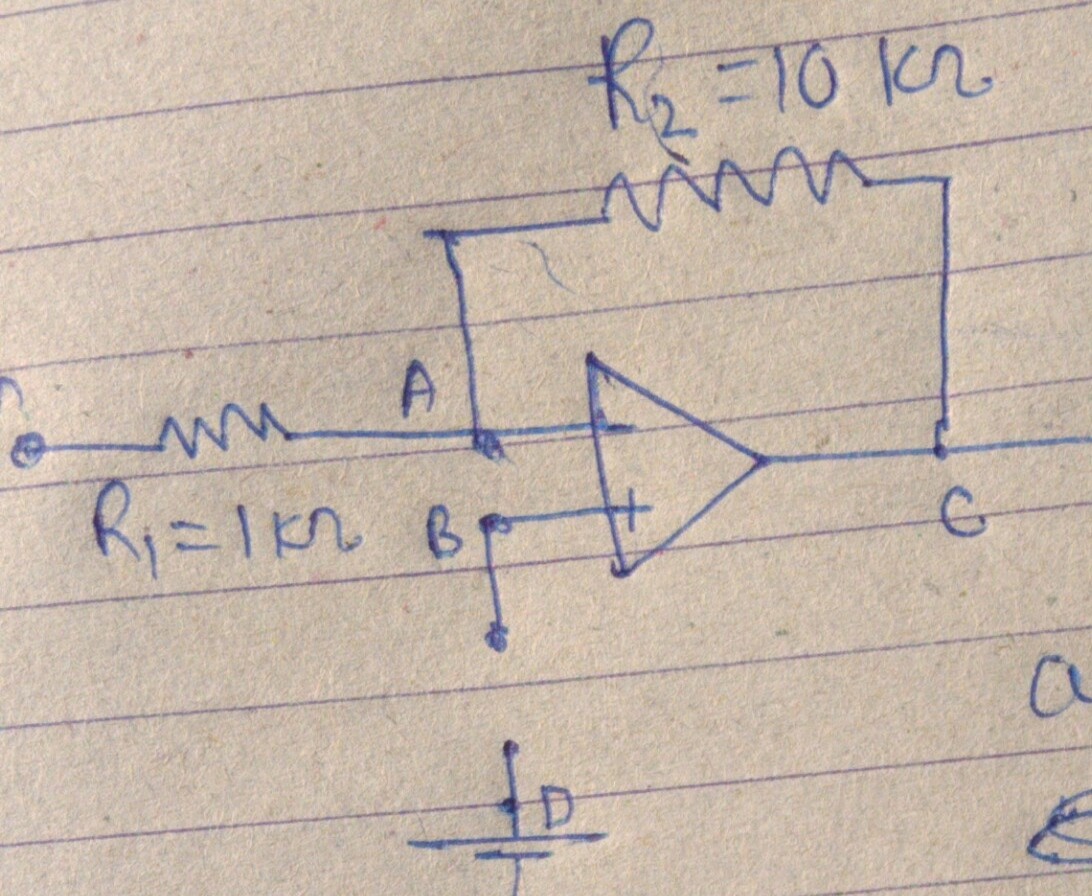 The way I was trying this question was like this:

For any arbitrary value of \$R\$ (resistance between point B and D) in given circuit voltage at point B is zero and due to virtual ground voltage at pt. A is also 0. Now we can apply KCL to get output voltage, and in this way can I conclude that output voltage will remain same even if circuit is open (as shown in figure?)

I have long been convinced that such fundamental issues are best clarified through simple conceptual circuit diagrams in which power supplies and current paths are shown. I have done this in another question and answer from which I will use some figures here.

The problem comes from the unusual bias technique used in the input differential stages of operational amplifiers. I hope you understand very well the idea of the bias voltage - it is just another pre-existing input voltage. From this viewpoint, 1-input amplifiers are actually 2-input summing amplifiers.

The biasing is made from the side of the output - transistor emitters, where a current source (sink) is inserted. This source forces transistors to adjust their base currents so that each of them passes 1/2 of the emitter current. For this purpose, the bases should be firmly fixed (like in the case of the common-base amplifying stage). Figuratively speaking, the emitter current source "moves" the emitter voltages like by levers... so the other ends of the levers should stay immovable. And if some of the bases is not fixed at a constant voltage, the emitter source will not do anhything.

Note that there are not internal paths for the input bias currents. Circuit designers rely on an external "galvanic" (low-resistive) connection that we, consumers, should provide. Usually, input voltage sources (if they are galvanic) pass the bias currents through themselves. If not, additional relatively high resistors should be connected between the inputs and ground.

Let's look at the picture where the currents are representad by closed paths (loops). The currents are distributed symmetrically in half and the output voltages are equal.

If you disconnect T1's base, IB1 will dissapear and all the emitter current will be steered to T2. VOUT1 will reach V+ and VOUT2 will be close to ground - Fig. 1. 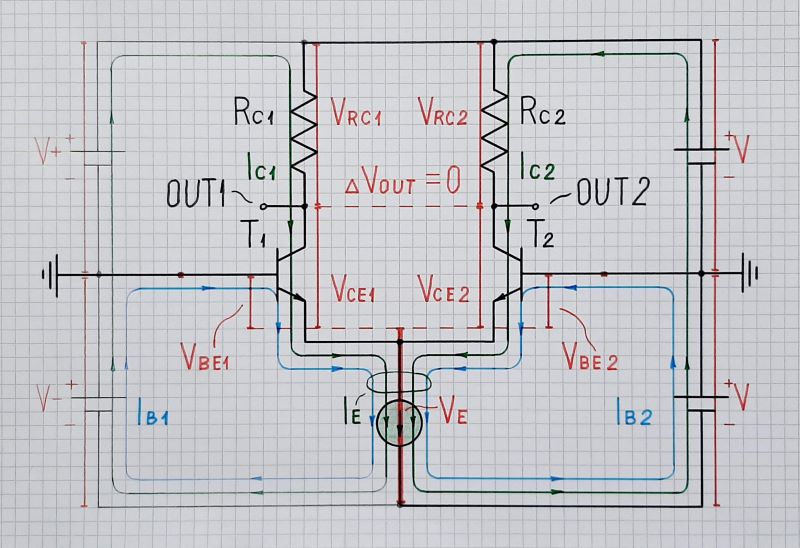 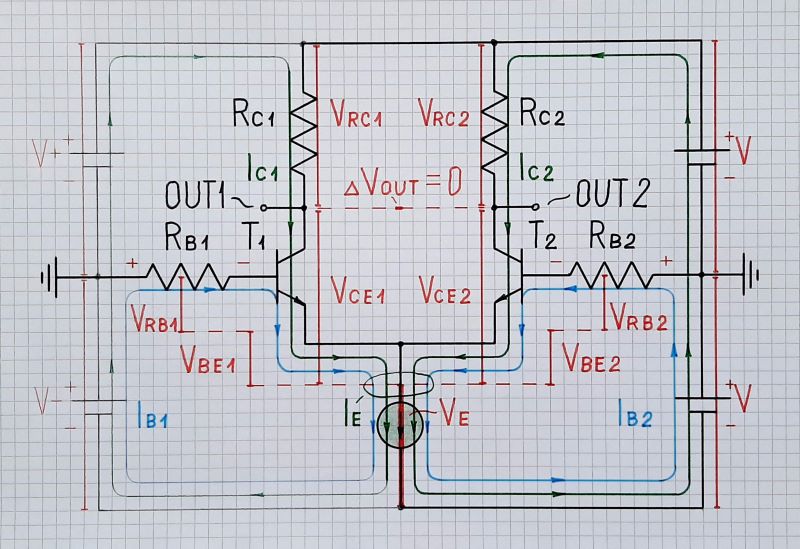 The opamp will not work because the transistors will not be able to draw their input bias current.

The first stage of an opamp is a differential pair. 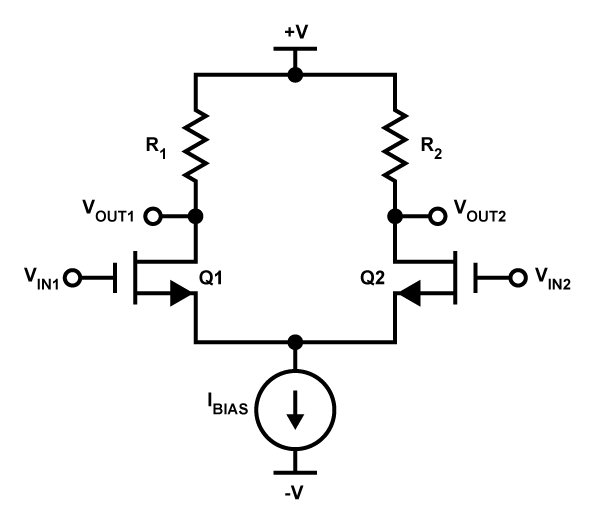 The inputs of the opamp are connected to the gates of Q1 and Q2. The transistors need to be able to draw current through the gate to work. If one of the inputs is open, one of the two transistors will not function properly. Thus you need to ensure that their is a DC path for both opamp inputs.

It depends on the internals of the opamp. Here is a LM328 as an example. Q1, Q4 require some base current to function. 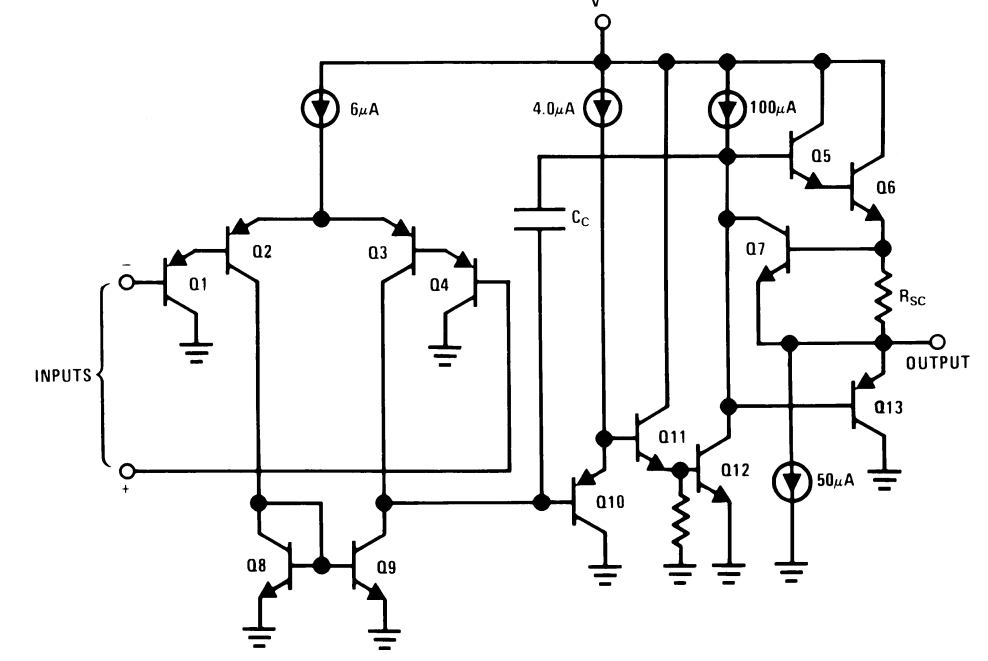 If Q1 base is disconnected, Q1, Q2 will be off. 6µA current from current source will flow through Q3, turning off Q10, turning on Q11,Q12, and output will swing to the negative rail.

This gives you an idea of the base currents for Q1, Q4. Since input transistors are PNP, input base current flows out of the chip. If they were NPN, it would be the other direction. If they were FETs, then input current is mostly leakage, and its polarity depends on what's happening in the chip. If it has a dual input stage like in a rail to rail opamp, then input current polarity depends on the sum of the input current for both stages, so it can flow in either direction.

suppose if in given figure there is a resistance R between point B and D and if we keep increasing this resistance then output voltage will not change.

No, that's not true. The opamp inputs source or sink bias and offset currents (source or sink depending on polarity). These currents will create voltage across the resistances connected to both inputs, and this voltage is interpreted by the opamp as signal, so it ill be amplified by the circuit gain (in your case gain is -10) and appear at the output. So the output will change. If the offset is large enough to clip the opamp then the output will be stuck near the positive or negative supply, and it will no longer operate in linear mode, which means the voltage between positive and negative inputs can no longer be considered negligible.

You can calculate this in your circuit by using an ideal opamp model, and add current sources in the inputs to model input bias and offset current. You can call them i- and i+, remember each input sinks or sources a slightly different current, the difference being the input offset current. Then calculate the voltage that appears, and you should be able to calculate what happens to the output.

In an ideal circuit you can't have nodes "floating" as that will result in infinite possible values for that node. This situation is called non-isolated system.

In a real scenario you can assume that a floating node is connected by a large resistance to some other node, typically ground. Now, you may need to consider other non-idealities like the leakage of the positive terminal of your OpAmp to be able to calculate the actual voltage that the positive terminal settles to.

Finally, it is worth mentioning that SPICE simulators will place a minimum conductance (1/resistance) to the global ground on every node (gmin). This is done precisely to avoid convergence issues caused by floating nodes.

In a CMOS OpAmp this resistance to ground will be smaller than the resistance modelling gate leakage of the transistor at the positiver terminal. Hence the positive terminal will be at 0V.

2
Differential pair biasing by current sources
1
Where do input bias currents flow and what voltage drops do they create?