Switching a current with an NPN transistor and a P-MOSFET

Just learning about transistors and I'm trying to clearly understand how to apply them for basic switching, in terms of the two standard cases, i.e., Active HIGH behavior and Active LOW behavior. For the Active LOW case, I am still having some trouble.

Assume a simple circuit where I want to switch an arbitrary 1-Amp current based on the status of a Digital signal, and I want Active LOW behavior (i.e., current should flow when digital signal LOW).

I'd be interested in brief feedback in terms of whether my circuit drawn below would accomplish the above, or if it can be improved/simplified further.

Notes: Q1 is an NPN transistor, and M1 is a P-MOSFET. And I chose a 10K value resistor for R2 because fast switching is not critical, but I'd also welcome opinions on that.

EDIT: Below circuits are 1st revision based on @ThePhoton's suggestions. 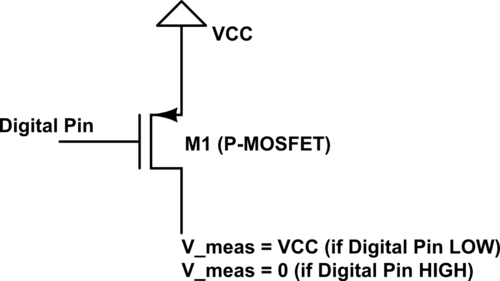 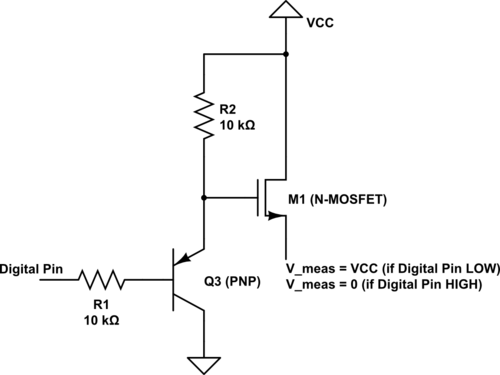 (Below is my original, erroneous method prior to 1st revision:) 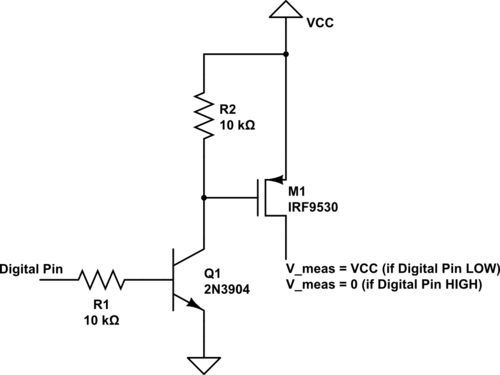 You can just use the PMOS, and use a pin switched from output low to high impedance (e.g. input) to switch it on/off: 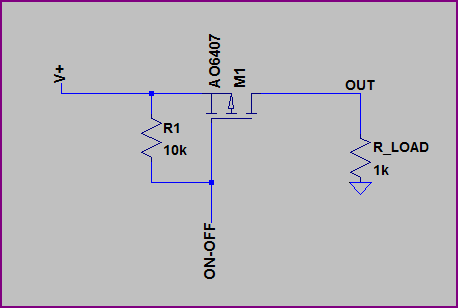 The 10kΩ resistor holds the FET off when the ON-OFF signal is left floating (i.e. your pin is an input/high impedance)
Then when the pin is driven low, the gate is pulled to ground and the FET turns on. You need to make sure the P-ch MOSFET you use has a suitably low Vgs(th) (turn on voltage threshold - some can be quite high) so you want a "logic level" MOSFET.

When the input is high, Q1's base-emitter junction will be forward biased. This will make a large collector current flow in Q1, and the collector voltage will be almost ground (about 0.2 V for most transistors -- see data sheet).

When this happens, M1's gate will quickly be pulled low through Q1. The gate of M1 will be near ground, while the source is connected to Vcc. A P-channel MOSFET is on when the gate is lower than the source by a threshold specified in the datasheet. So, M1 is now on, and it's effectively a small resistor (see \$R_{ds_on}\$ in the datasheet).

Now now, the digital input is high, and the output is effectively connected to Vcc. This is the opposite of what you want.

Now, the digital input goes low. Q1's base-emitter junction is no longer forward biased, so no collector current can flow in Q1. Since the collector is connected through R2 to Vcc, the collector voltage will be Vcc. The source of M1 is also Vcc for a different of 0V -- M1 is off, effectively an open switch.

At this point, your output isn't 0 V, it's simply floating. You could connect the output to a pull-down resistor if you needed it to be 0 V. That's not always necessary, however.

What you actually have here is pretty common, and it's called an open drain output. The BJT equivalent is called an open collector output. Normally it's done with N-channel or NPN devices, however. It allows the other end to add the pull-up resistor, and there's no reason it has to be connected to Vcc; it could be connected to some other voltage.

Finally, you asked about R2. There's nothing really wrong with it, but it does mean that M1 won't turn off as fast as it turns on. The reason is that a MOSFET's gate looks like a capacitor to the circuitry driving it. If you look at the schematic symbol, it even looks like a capacitor. It takes some amount of current to change the voltage across a capacitor, and the more current you can make flow, the faster that can happen. Q1 provides a lower impedance path for current to turn M1, while R2 presents a significantly higher impedance path to turn off M1. This isn't a problem unless you need to switch at high speed.

Not the answer you're looking for? Browse other questions tagged transistors switches mosfet npn or ask your own question.