AC Measurement of a Transistor

I am trying to analyze a transistor circuit. I should find RMS output and input current and voltage. I have made some calculations but I am not sure of whether they are acurate or not.

For input voltage: My signal generator's amplitude is 300mVp so the input signal amplitude should be same. 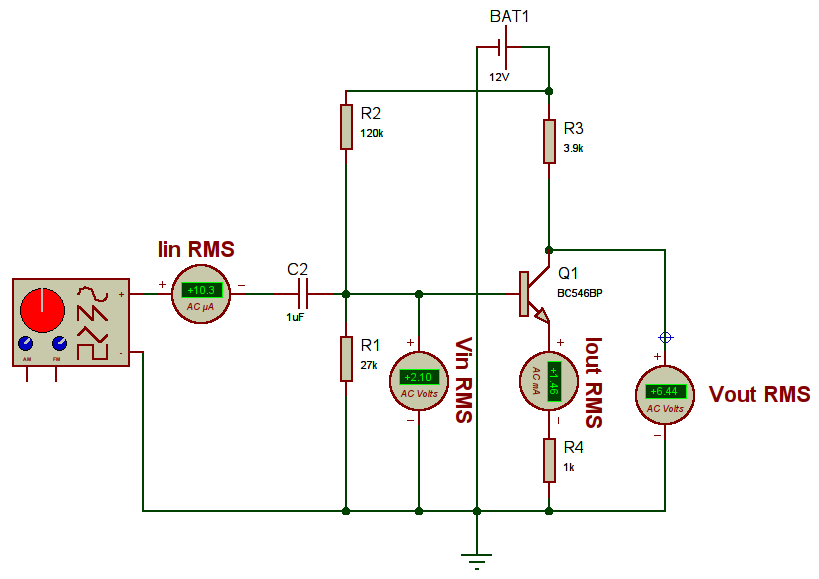 It's a lot easier to read the schematic, as follows: 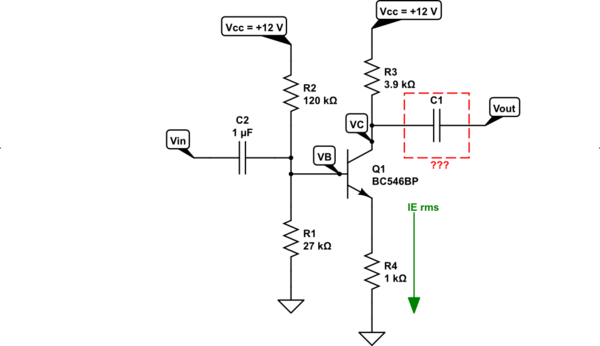 You are supposed to determine:

(All voltages above are referenced to the schematic ground.)

I would have imagined that you were supposed to find \$V_{\text{OUT}_\text{RMS}}\$ (as shown in the schematic) because it does not include a DC bias and is therefore usually more comparable. I would also have imagined comparing it with \$V_{\text{IN}_\text{RMS}}\$. But, I guess, that's not what you are supposed to do. (The emitter current will also include its DC bias, as well. So I'll just cave in and believe two of your requirements as stated.)

Specifications are as follows:

I don't derive the equation for it, but you can find the collector current sensitivity equation here:

Just be aware. There's no point writing down the quiescent collector current with any higher precision than the expected situation allows for.

At this point, I cannot add much to help out as I really don't know enough about the situation, yet. If you add more to the discussion, I may add a few more thoughts to the above.

Not the answer you're looking for? Browse other questions tagged bjt homework common-emitter calculation or ask your own question.

1
How can I read the Beta value of a BJT for a specific circuit from the datasheet?
0
BC547 base current and collector current

1
Why is this BJT transistor saturated?
1
Single input impedance of long-tailed pair
3
Calculate output impedance of emitter follower
0
Input impedance of grounded emitter amplifier with DC feedback
3
Why do not we use always current signal sources for BJT amplifiers?
0
Calculating base current without knowing current amplification
2
Design a class AB audio amplifier