So I know the theory behind a bootstrap current source in power audio amplifier and understand its operating principle but some things remain uncertain to me.

First - how to divide the collector resistance in voltage amplification stage? I did run some simulations and it's clear, that $$ \frac{R_1}{R_2} $$ ratio actually matters.

I don't understand why it happens. From the theoretical point of view, it should not matter which resistance is bigger.

Second - how to calculate the open loop gain after applying a bootstrap? Or perhaps I should ask - what's the actual value of collector resistance then? I need this to choose the correct value of \$R_{\text{in}}\$. 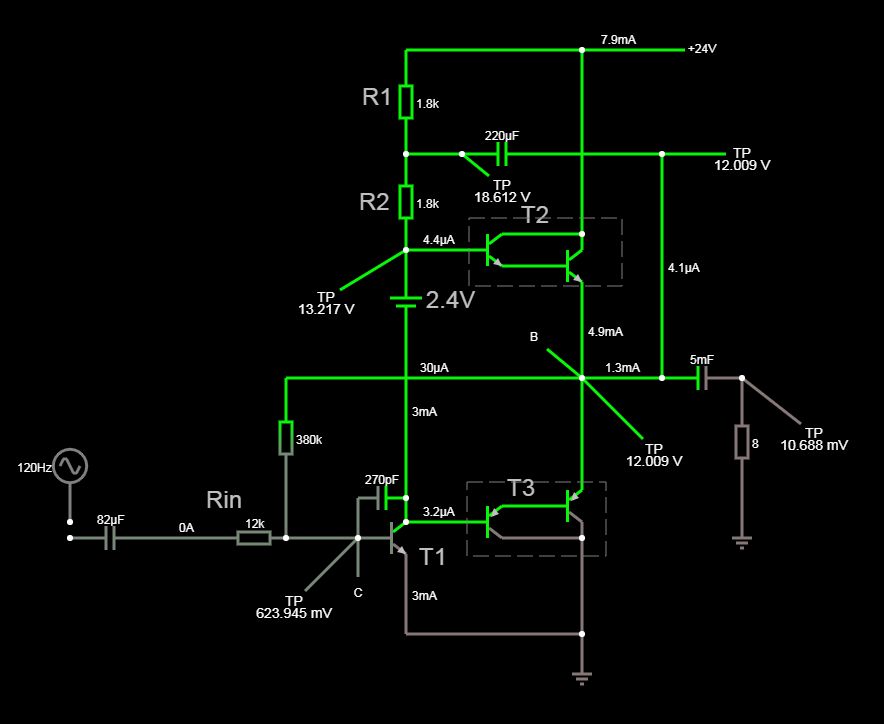 Take a look at this example circuit: 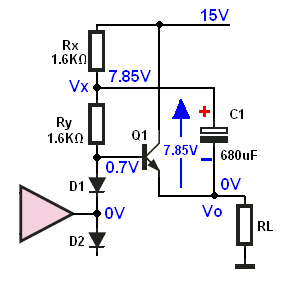 Now let us see what will happen if the output voltage is at a positive peak and equal to \$+10V\$.

The situation is shown here: 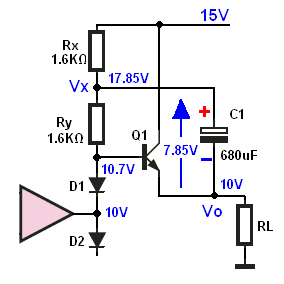 As you can see the voltage at \$V_X\$ node is now higher than the supply voltage. And this is why we can achieve a larger voltage swing at the output for a positive cycle.

Because now the maximum positive voltage at the output can reach:

But we have another benefit from the bootstrap capacitor.

Notice, that now the voltage across \$R_Y\$ is almost constant and equal to:

And this means that \$R_Y\$ acts just like a constant current source.

For the AC signal, the \$R_Y\$ resistor is seen as a bigger resistor due to Miller's effect. But this time we have positive feedback (non-inverting stage) and the amplifier gain is less than one (voltage follower). So we called it a bootstrapping.

Where \$A\$ is an output stage (voltage follower) gain.

The typical value of output stage voltage gain will be around \$0.9\$. Thus the \$R_Y\$ a resistor will be seen by the VAS stage as a ten times larger resistor.

But the \$R_X\$ value cannot be too low because this increases the size of a bootstrap capacitor.

Not the answer you're looking for? Browse other questions tagged transistors amplifier audio bjt or ask your own question.