I would like to know if it is necessary to add a base resistor to the Q1 transistor in the below schematic? 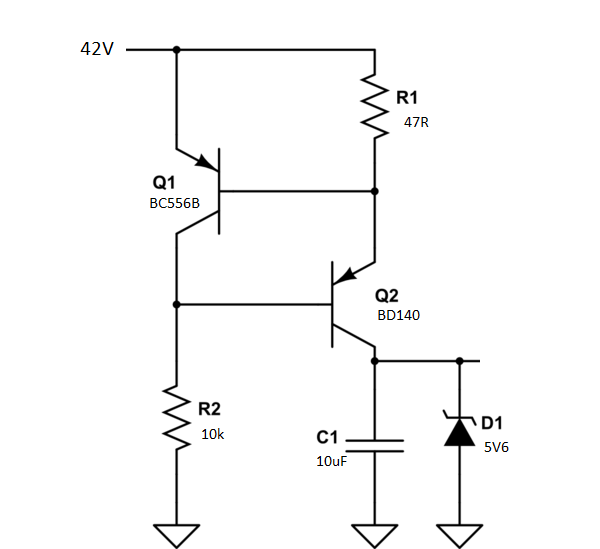 No. The circuit looks like a 12-to-13 mA constant current source, so D1 has a constant current despite variations in the 42 V supply and its downstream load. As such, circuit action will keep the Q1 base current well below 1 mA.

A Q1 base resistor would protect Q1 in the event that both Q2 and D1 dead-shorted, but that resistor also reduces the "constant-ness" of the constant current circuit. Even though the Q1 base current is very small, it does vary with changes in the 42 V source because its gain curve is not flat. This variation in base current will appear as a variation in the voltage across the base resistor, which adds to the Q1 Vbe voltage that is critical to the circuit's operation. IOW, a base resistor will make the output current vary more with changes in the source and/or load than it would without the resistor.

yes R2 is essential. but no Rb(Q1) is needed as Q2-e provides that pull down.

comment: without design specs; there may be other problems such as load regulation error and temp rise.

The zener current is the constant current source current minus any load current you may be drawing from the circuit at the zener cathode node.

If you want the zener to exhibit the nominal voltage drop on the datasheet you might set the current so that the zener sees Izt (eg. 5mA for a BZX84C5V6).

Note that with a 42V supply, a simple resistor will give a fairly good approximation of a constant current source if the 42V does not change much. The simple constant current source may be better or worse depending on what you are comparing. In terms of hitting the nominal current as closely as possible and in terms of temperature stability it could be worse depending on how accurate/stable that 42V is. In terms of reducing ripple (if such exists on the 42V supply) it will probably be a lot better.

The schematic looks like a current limiting circuit. I am afraid yes you need the R1 resistor unless you want to burn out the transistor.

Not the answer you're looking for? Browse other questions tagged zener constant-current pnp or ask your own question.