Ask Question
Asked 2 months ago
Active 1 month ago
Viewed 77 times
0
\$\begingroup\$
Closed. This question needs to be more focused. It is not currently accepting answers.

I am building a device that requires a lot of energy at its peak, about 30W.

The kind of supply I want to build looks like this: 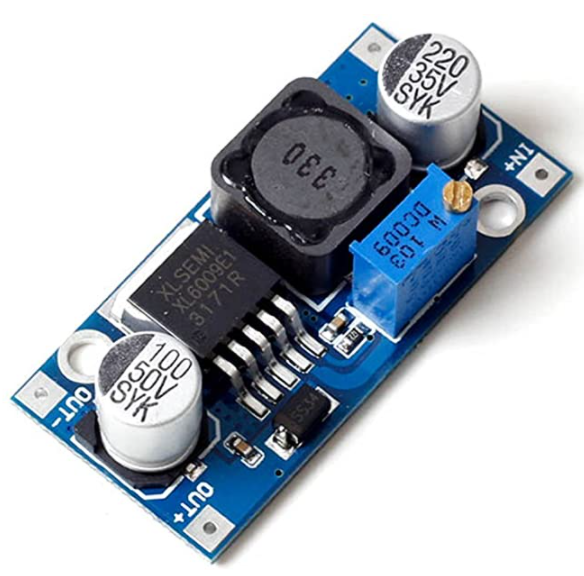 I understand that this is made of a controller which switches a transistor at a certain frequency. The inductor and capacitor charge up during the ON state of the transistor and they discharge during the OFF state when the load is present.

The only issue here is that I can't figure out how to increase the power.

What are the most important values in Inductance/Capacitance/Frequency to build the desired supply?

Last, magnetic fields are important in this design, thus components such as the above inductor which has a shield would be desired.

This is merely to add to rfdave's answer, which is definitely the right answer - you just have to do the footwork and find the right part, either by looking at manufacturer's websites, or just searing on Mouser or Digikey etc.

But to help you with that search, I wanted to point out that switchers of buck, boost, or inverting/buck-boost topologies tend to come in two flavors: switching controllers, and switching converters/regulators. This terminology is a bit loose so you won't always see things referred to by these names, but most of the big manufacturers like Analog Devices, Texas Instruments, or ON Semiconductor (and others) all use this terminology. Switching regulators and switching converters are usually synonymous.

Switching converters (or switching regulators) usually refer to the kind of IC that is used in the buck converter you've used as an example. Converters contain not just a controller, but the actual power transistor or transistors that do the heavy lifting of switching current. More advanced ones don't even require an external diode, instead relying on a second internal transistor used for synchronous rectification.

These ICs are typically much easier to use and more forgiving when it comes to PCB layout or component selection. They also tend to be pricier (per IC, the total BOM cost is a different story) and much more constrained in their power and current handling capabilities. They are a single, usually very small package and the internal switching transistors are going to generate heat, and you can only dissipate so much heat from something that small. That said, 30W is well within the range of such converters, including 6A. This is definitely more towards the higher end of this range, but they exist.

Switching controllers, on the other hand, do not contain any switching transistors - they are controllers and only controllers in the strictest sense. They control everything, but you're expected to provide the components for it to control, specifically the switching transistors (usually MOSFETs). Instead, they will have built-in gate drivers to drive MOSFETs, but selecting which MOSFETs to use is totally up to the designer.

Unfortunately, this makes things vastly more difficult. Choosing the wrong MOSFET can make your buck converter dissipate way too much heat and essentially be unusable, or just be a really roundabout way of making MOSFETs catch fire (FET stands for fire emitting transistor*). And things will be much more sensitive to a bad PCB layout, with potential for similarly severe consequences. However, by giving the designer the freedom to pick their own switching transistors, these have a much wider range of power handling, able to handle almost arbitrary power levels. There are 6 phase switching controllers capable of output powers of 2kW easily. But you will never find that kind of power in a switching converter, due to shear thermal constraints.

But don't worry, 5V at 6A is nothing so demanding to require a switching controller.

TI's Web bench will do almost all the work for you, and is a great place to start if you've never tried to design something like this before. Most importantly, it will provide board layouts and not just schematics, and layout is arguably even more important than the actual circuit when it comes to switchers.

If you want something easy to use but will also let you get your feet a little wet, what used to be Linear Technologies' line of switchers (LT was bought by Analog Devices, so they're sold by aAnalog but still under the Linear Tech brand name) are my personal favorite.

They have a lot of very easy to use switching converters with datasheets that are simple and easy to understand, and will just tell you how to calculate things like the size of the inductor you should use, output capacitors, that kind of thing with easy to understand and straightforward equations. If you just want things done as quickly and easy as possible, I don't think you'll find anything easier than Web bench. But if you want to learn about designing these sort of power supplies, it is hard to find a gentler introduction than the LT8645S. It is also pretty pricy, but you're paying for the ease of use and built-in EMC compliance thanks to even things like the boost capacitor for MOSFET gate drive is integrated into the package.

Honestly, using Webbench is probably your best bet, but I wanted to give an alternative path just in case.

*No it doesn't. It stands for field effect transistor. At least officially.

I would recommend that you start at a manufacturers web side, and use their tools to design a switchmode supply. Texas Instruments has a site here https://webench.ti.com/power-designer/switching-regulator which will walk you through the design.

but Analog Devices has an roughly equivalent setup. Figuring out the answers to the questions/filtering options will help flesh out the design.

Not the answer you're looking for? Browse other questions tagged power-supply power dc-dc-converter buck or ask your own question.