How batteries create voltage? How do batteries in series increase voltage?

I'm trying to figure out how batteries and voltage work in actuality.

Statements I assume to be true.

Are these statements accurate?

QUESTION 1. In Fig 2 in the image below, how does connecting batteries in series produce a higher voltage, meaning a higher potential difference? The connecting of the batteries does not produce more electrons at the minus pole connected to the conducting wire. Meaning point E electrons doesnt move to point C.

Is it related to magnetic fields? That when eĺectrons from D move to E those electrons in motion creates a magnetic field affecting the entire E field thus increaseing the potential difference?

QUESTION 2. In Fig 3 why doesn't electrons still go from one negative pole on one battery to the positive pole on the other?

Edit: I mean the electrons should still get consumed by the chemical reaction there continuing the process? 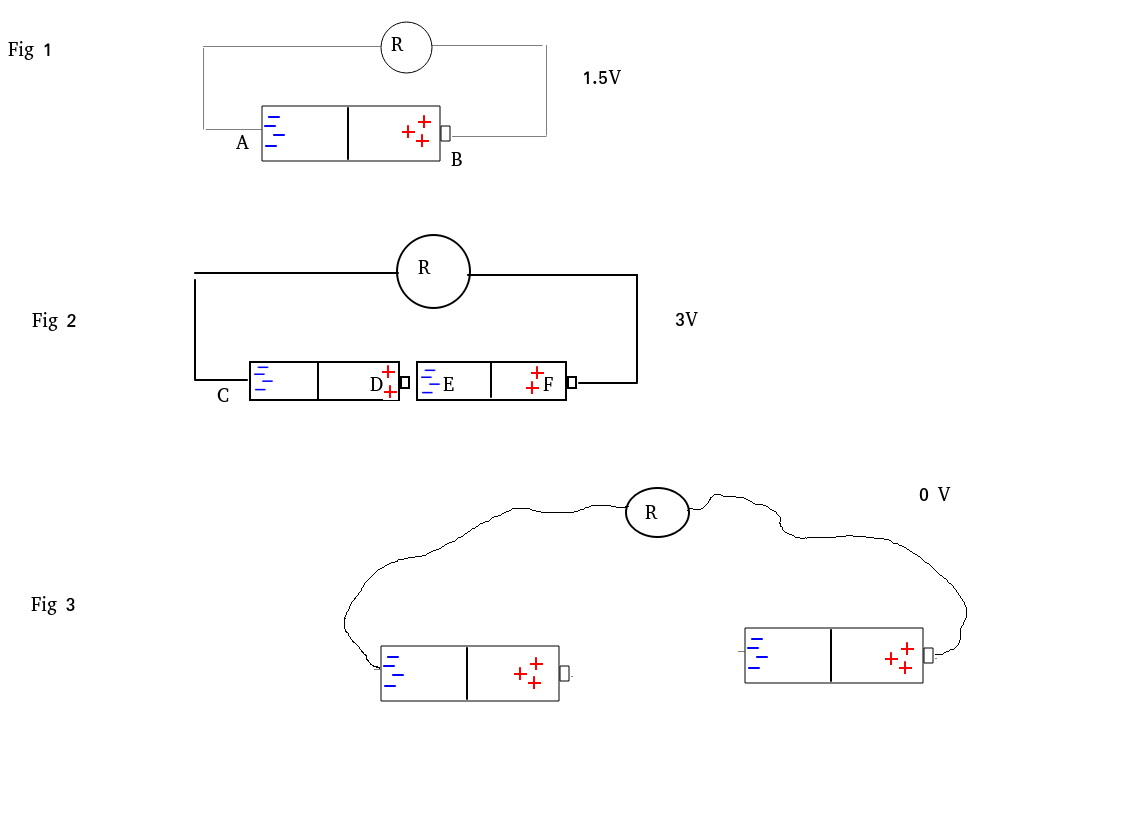 how does connecting batteries in series produce a higher voltage, meaning a higher potential difference? The connecting of the batteries does not produce more electrons at the minus pole connected to the conducting wire. Meaning point E electrons doesnt move to point C.

They do, though. So long as the circuit is completed (by the "R" element), the electrons at E will flow into the left cell and be transported by the chemical processes insdide it to point C.

Okay, not literally the same electrons. But these electrons will flow into the left cell, combine with positive ions at the cathode, enabling the chemical reaction in the cell to proceed and produce more electrons at its anode.

In Fig 3 why doesn't electrons still go from one negative pole on one battery to the positive pole on the other?

Because it takes a voltage gradient of 1000's of volts per centimeter to get electrons to fly through the air, and here you have only 3 V difference. If you moved the two ends of the batteries within about 10 um of each other you might produce a spark allowing the electrons to flow from one to the other.

I might have figured it out. I studied galvanic cells a bit. So there is a chemical agent at the anode(negative) releasing electrons, producing positively charged ions, the reverse happens at the cathode(positive) reducing a chemical agent producing a neutral atom from the ion. In the battery there are also other ions both positive and negative that simply move from one end to the other of the battery to maintain the potential difference but doesn't release or pick up electrons, they simply maintain the potential "pressure" on the agents that can actually release electrons.

If I'm right I guess it turned out to be a chemistry question.

1
Why is it not possible to measure voltage between one battery pole and ground?
0
Electron flow in Lead Acid Cells in series to make a 12V
0
How can an electron have 0 electric potential after exiting a resistor but have current?
1
Battery operation, charge and discharge processes misconceptions
0
No potential difference between the negative terminal of battery A and positive terminal of battery B?
1
Voltage drop in a conductor
0
Can't for the life of me figure out voltage of batteries in series
0
What exactly is electric potential (what's wrong with my picture of it)?