What "was" input resistance of this voltage-voltage topology amplifier before feedback? 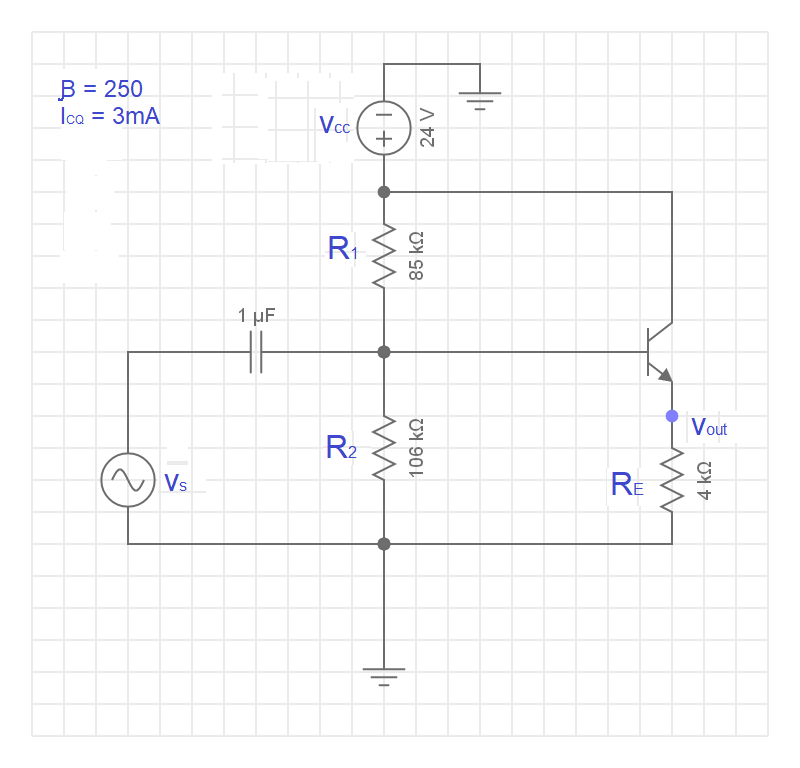 I read that one of the advantages to negative feedback in this topology is that it raises the input impedance by a factor of \$1+KA_V\$ (where \$K\$ is the feedback factor and \$A_V\$ is the open-loop gain of the internal amplifier). I did a simple analysis of the input resistance \$R_{in}\$ and found that

I was able to verify that this is the correct input impedance. By simulating a test signal \$v_s=20mV\$, I measured the current entering the circuit at \$i_{in}=444nA\$, which checks out.

Here's the part that doesn't make so much sense to me. If the negative feedback increases the input impedance by a factor of one plus the loop gain:

What was the internal amplifier's input resistance before the negative feedback was added? From my previous work with this circuit, I know that ...

Plugging all this in, I should be able to find the internal amplifier's nominal input resistance \$R{in'}\$before the feedback network was added.

For the life of me, I can't see how the internal amplifier could be analyzed to have an input resistance of 93.6. I'm fairly certain my loop gain is correct as all those calculations check out in a previous question (here).

As an aside, I did try comparing this circuit to one with \$R_E\$ removed to see if that helped any (it didn't, I don't think). I reduced \$V_{cc}\$ to a low enough level that my \$I_{CQ}\$ remained at \$3mA\$. My input resistance fell as expected to \$R_{in}\approx \beta*r_e \approx 2080\Omega\$. So, again, my analysis of input resistance proved out OK and checked out in simulation. But adding the feedback resistor \$R_E\$ only increased the input resistance by a factor of around 21, not the expected 1 + loop gain factor.
Can anyone explain what expression for an internal amplifier's input resistance will work with the \$R_{IN}=R_{}in'(1+KA_V)\$ equation?

Comment: The "open-loop gain" (Aol=gRE) is a fictitious expression because the circuit cannot be operated without feedback. This is due to the fact that there is no "outer" feedback loop that could be cut. Output and inverting input nodes are identical (internally connected).

And dividing both sides by \$i_{in}\$, we arrive at this expression for the overall closed-loop impedance, or the impedance seen at the input.

Note that I used values for \$K\approx1\$ and \$Av\approx482\$ above from a previous question here. This overall impedance checks out in simulation. (To test it, I modified the original circuit to have the feedback component removed. I replaced \$R_E\$ with a short to to ground and adjusted \$Vcc\$ down to approx. 2.37v. This kept the remaining resistor values unchanged and kept the quiescent current steady at 3mA.)

So, the internal amplifier without feedback is roughly equivalent to the circuit without the emitter resistor. Yes, this would be a useless circuit! But now the effect of feedback can be seen more clearly. And to answer the original question, the input impedance "before" feedback was added is lower by a factor of \$A_v\$, which would be equivalent to the circuit running without the emitter resistor in place.

The reason I had trouble simulating this in my original posting above is that I had erroneously included the effect of the biasing resistors \$R_1||R_2\$. Taking these into account, we see that the circuit without feedback is hardly changed at all by the divider:

but in the circuit with feedback, the divider network significantly reduces the effective input impedance:

Not the answer you're looking for? Browse other questions tagged amplifier bjt input-impedance negative-feedback common-collector or ask your own question.

1
How do I analyze this negative feedback?
0
Voltage-voltage Feedback and common-collector analysis?