Does an alternating current have surface charges associated with the current charges?

As alternating current passes along a wire: 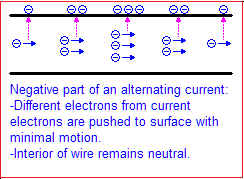 From Gauss' law we get the fact that there is no field inside a closed conductor. this puts the unbalanced charges on the surface of the wire in response to the local charge-imbalance on that wire.

In large conductors the skin effect puts most of the alternating current near the surface of the wire, but that's a magnetic effect.

As alternating current passes along a wire:

A wire long enough to present even a half wave of AC is not a mere wire anymore, it's now a transmission line, and new emergant behaviours come from the wave properties of signals in wires.

Is this view correct?

The picture is a nonsense. but see Gauss' law.

This would mean there are two groups of charges.

the distance traveled by most charges in a wire carrying domestic AC is just a fraction of a millimeter before the current reverses, in an antenna carrying radio frequency it's even less.

Also note that potential and current need not be synchronised.

Experimentally: Is there a strong electric field associated with each half wave even with a low resistance wire?

Not the answer you're looking for? Browse other questions tagged current antenna or ask your own question.

8
Is the electric field in a wire constant?

2
Dipole antenna VS. coil for RF transmission or recieving
4
Why do we not use both E and B fields for a receiving antenna?
1
Receiving dipole antenna for VLF
1
Antenna transmission when a generic signal is applied
0
Electric field strength from AC conducting wire in form of a loop along z-axis?
2
How does an antenna tune in a particular frequency on the receiver side?
1
Current flowing in an open circuit to make it the same voltage
0
Far field radiation and spherical waves
0
Characersitics of a traveling wave on a half wave dipole antenna
0
Distribution of surface charges along the wire