Been struggling to find information that I find to be obviously missing on how to interpret antenna radiation patterns. For example have a look in the datasheet for my chip antenna. I can understand the three 2D radiation pattern graphs, one for each plane, what I don't understand is what the Horizontal and Vertical plots mean in the context of an antenna. I know it refers to the polarization of the RF waves transmitted/received, but couldn't find a decent source explaining exactly how this information can be used correctly.

OK, let's look at the radiation pattern plots in your example. [ 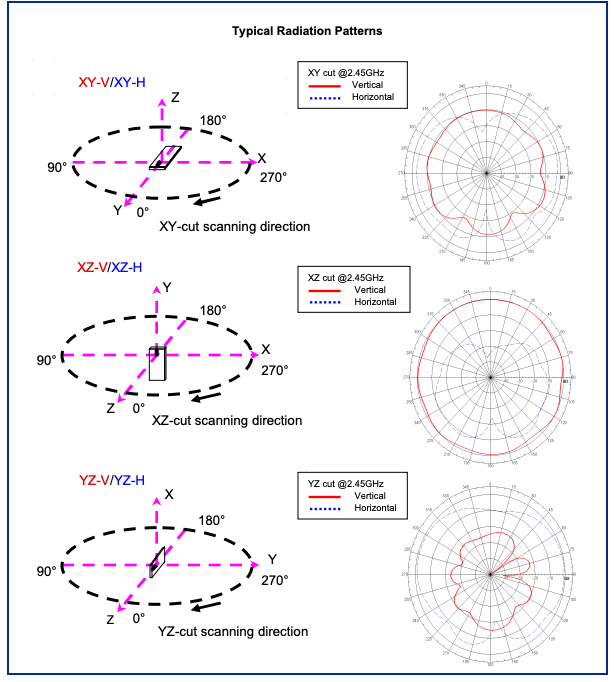 You already know these show the relative intensity of radiation in various directions within 3 different planes relative to the antenna. Within each plot, the Vertical (red) and Horizontal (blue dots) tracings represent the relative intensity of the radiation components that are vertically and horizontally polarized. You can imagine the chamber test probe (not the antenna under test) as a dipole being rotated into vertical and horizontal positions for these readings.

The V and H plots give you some idea how effectively the antenna will work when transmitting to or receiving from a linear polarized antenna in those two different orientations.

Looking at the 3rd plot, it's not surprising that the predominant radiation is horizontally polarized, because the antenna under test is, to a first approximation, a dipole oriented along the Z-axis (which is horizontal).

In the 2nd plot, again, it's not surprising that the radiation is mainly vertically polarized, since the antenna's approximate dipole is now oriented along the Y-axis (vertical).

Practically speaking, what does it all mean? For such a small component, it's a pretty good antenna. It gives coverage, without terribly deep nulls, regardless of the polarization of the other antenna. But do bear in mind that the size and shape of the PCB will have a significant effect on these patterns.

Not the answer you're looking for? Browse other questions tagged rf antenna wireless or ask your own question.

1
Antenna orientation and polarization
2
How did four-course LF radio navigation ranges have their beams other than at 90° / 180° angles?
2
What physical factor affects the antenna's bandwidth?
4
How can an RC plane receive when the polarization of the antennas is nog alligned?
3
What is this antenna called, and what does the polarization and radiation pattern look like?
6
What is the 3D radiation pattern of this chip antenna?
0
Absorber effect on EM RF pattern
0
How can a crossed dipole (turnstile) antenna be omnidirectional in 3D?
0
Why does an LHCP (or RHCP) antenna reject RHCP (or LHCP) signal?