For a bird camera project, I would like to power 4 infrared LEDs from a Raspberry Pi as the light source for the Pi's NoIR camera.

I came up with two different circuits: one with all 4 LEDs in parallel, and one with two strings of two LEDs in series. 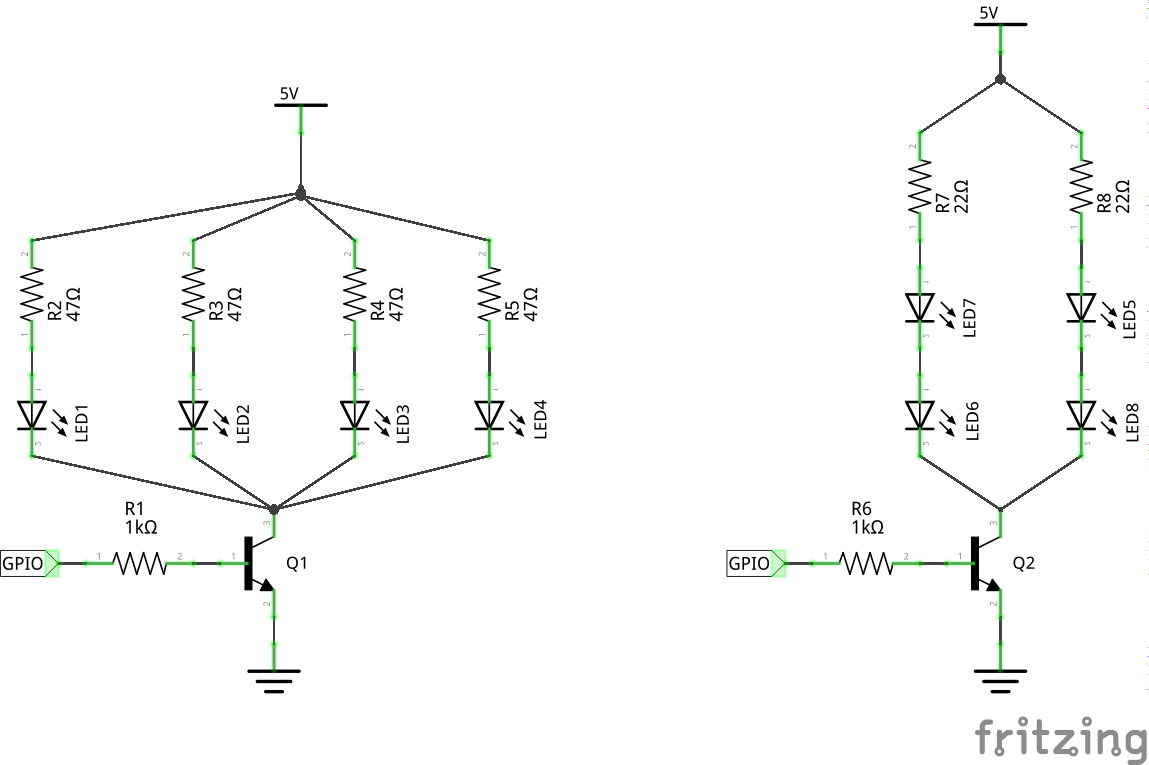 Which circuit would be the best choice?

In the first circuit, with all LEDs in parallel:

In the second circuit, with all LEDs in parallel:

For the LED current, the second circuit is exactly at the maximum rating for the IR LED. Would that be a problem? Do I risk damaging the LED?

For the transistor current, both circuits are within the limits of the 2N5551 transistor (600mA). For the second circuit a 2N3904 transistor (200mA), might work as well - or is this again too close to the limits?

Does the higher current of the first circuit also mean it consumes more power? So in that regard the second circuit would be the best choice? Are there any other advantages/disadvantages?

PS: I'm not sure whether it matters, but I intend to control the brightness of the LEDs via PWM.

Series is always the best, you waste less power on the resistors, your BJT needs to handle less current.

Also the forward voltage of LEDs may vary quite a bit, which will make some LED draw more current than others and generate different brightness. This will not happen when in series as they will all share the same current. Brightness is directly correlated to the current, not the voltage.

If you can (have a higher voltage rail than 5V if it's battery-powered), put everything in serie.

Higher voltage is always easier to handle than higher current (within reason).

For the LED current, the second circuit is exactly at the maximum rating for the IR LED. Would that be a problem? Do I risk damaging the LED?

I think it will be a problem.

The data sheet tells you that the forward voltage reduces by 1.8 mV for every °C the temperature rises. Given that the power dissipated is nominally 1.4 volts x 100 mA = 140 mW AND the thermal resistance of the LED is 230 °C / watt, the LED will warm by 32.2 °C. The forward voltage will drop by nearly 58 mV.

So, it's creeping up a bit and you'd then need to recalculate the power dissipation given the new lower volt drop and the higher current but, it looks to me like you are teetering on the slippery slope. I'd probably go for a 27 Ω resistor to put the basic current calculation at 82 mA.

But then you could argue that the BJT might drop 100 mV when activated and that will reduce the currents a little. Why not simulate and get a better idea how to play this? Or just be done and use a MOSFET with a guaranteed turn on resistance less than 0.1 ohms so that you don't have to factor the BJT volt-drop into things.

Does the higher current of the first circuit also mean it consumes more power?

Yes it does. It's certainly more inefficient.

Both of your designs are inefficient and weak. Keep in mind these are bright point sources with a 45 degree beamwidth and inverse squared illumination loss. You want to consider the illumination quality and glare to the observer (tweet) and consider a diffused array.

I suggest you should use a string of 3 x 1.4V LEDs and use as many strings in parallel as you want.

I would use a power NPN rated for 5W driven by a current sense emitter R driven by a PN2222A. Choose something under 100mA per string.

I agree with Andy's assessment but I would go a few steps further to improve your design.

Don't use PWM s this will cause all sorts of poor image quality pixel blanking and/or aliasing with the frame rate Using a linear control voltage such as 0 to full scale with 0 to 3.3V 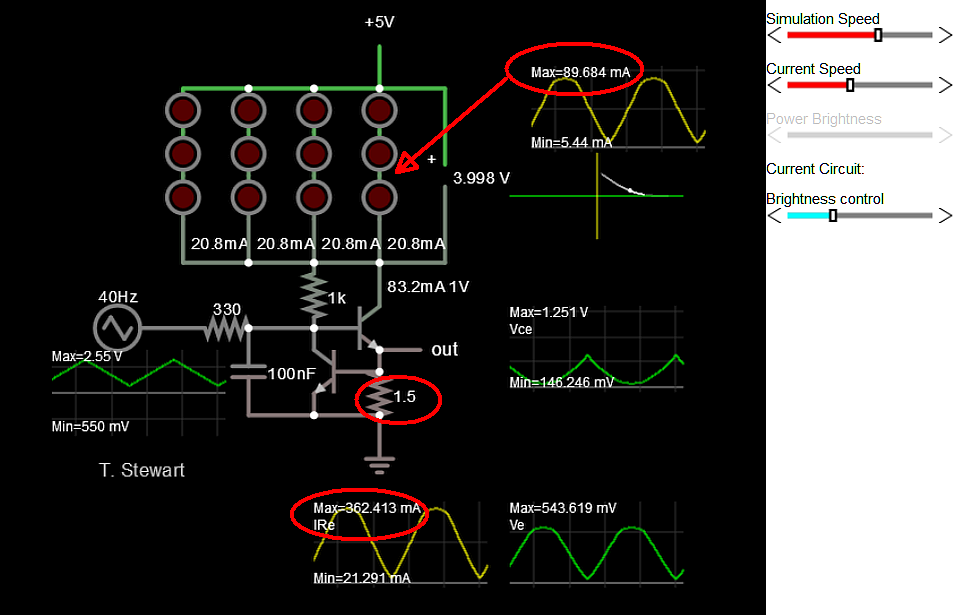 Batched IR LEDs are pretty well matched and in a string of 3 reduces chance of thermal runaway. But failure of any string is not protected yet here.

Not the answer you're looking for? Browse other questions tagged transistors led raspberry-pi infrared or ask your own question.