To start I am very much a beginner at electronics and am very limited in my tools.

I bought a IRF3205 mosfet a few days ago hoping that I could use it in a circuit I have where a 12V power supply at 1.5A is capable of going from the source to the drain to turn on an LED light strip. The would be mosfet controlled by 4.5V supplied by three triple a batteries at it's base.

I was disappointed though to test it and see that this mosfet only outputted less than 9v at the drain(I don't have a way of finding its current). Is there a way to make this mosfet work or do I need to buy a new one? If I need a new mosfet can I get a recommendation?

Again my goal is to control an LED strip—running at 12V, 1.5A—with a 4.5v battery supply going on and off with as few parts as possible, preferably just a single mosfet and no resistors or capacitors

This circuit may do what you hope for. Note that the 12V power is "normally on". That is, if the logic circuit is off, the 12V power will be applied to the load. If you need it to be the other way, it will take more components I think. 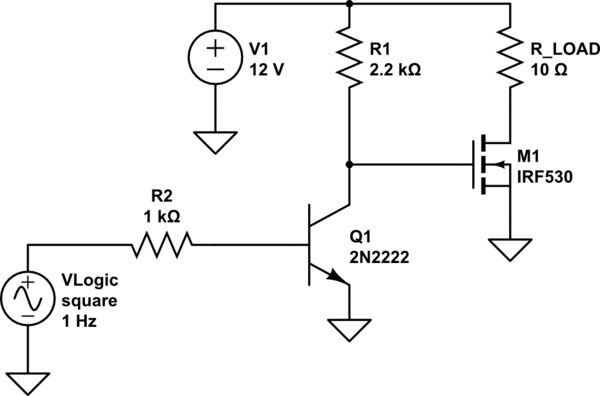 Not the answer you're looking for? Browse other questions tagged voltage mosfet switches or ask your own question.

1
Dimming an LED Strip (9v) with a 555 timer and MOSFET
1
How are led controllers able to switch high power/current without becoming hot?
5
IRF3205 MOSFET gate threshold voltage higher than expected
2
Will this MOSFET switch circuit work?
1
Mosfet behaving differently with other power supply and same voltage
0
How to fix an N-channel MOSFET that's always on, without using resistors
0
Switching 12V vehicle headlights with Arduino / Mosfet combination
1
Problems with low-side MOSFET in 12V LED dimming switch
0
Is this the right way to power a 12V LED and Raspberry Pi from the same 12V power source?