How can such an equation for the temperature of a *black body* be valid in this case?

I am currently studying The Art of Electronics, third edition, by Horowitz and Hill. Exercise 1.6 says the following:

Now, I'm trying to solve (c). I'm referring to this document, which claims that, to calculate the heat dissipated by the cable, we can use the Stefan-Boltzmann equation. However, according to the Wikipedia article, this equation describes the power radiated from a black body in terms of its temperature. How can such an equation for the temperature of a black body be valid in this case? 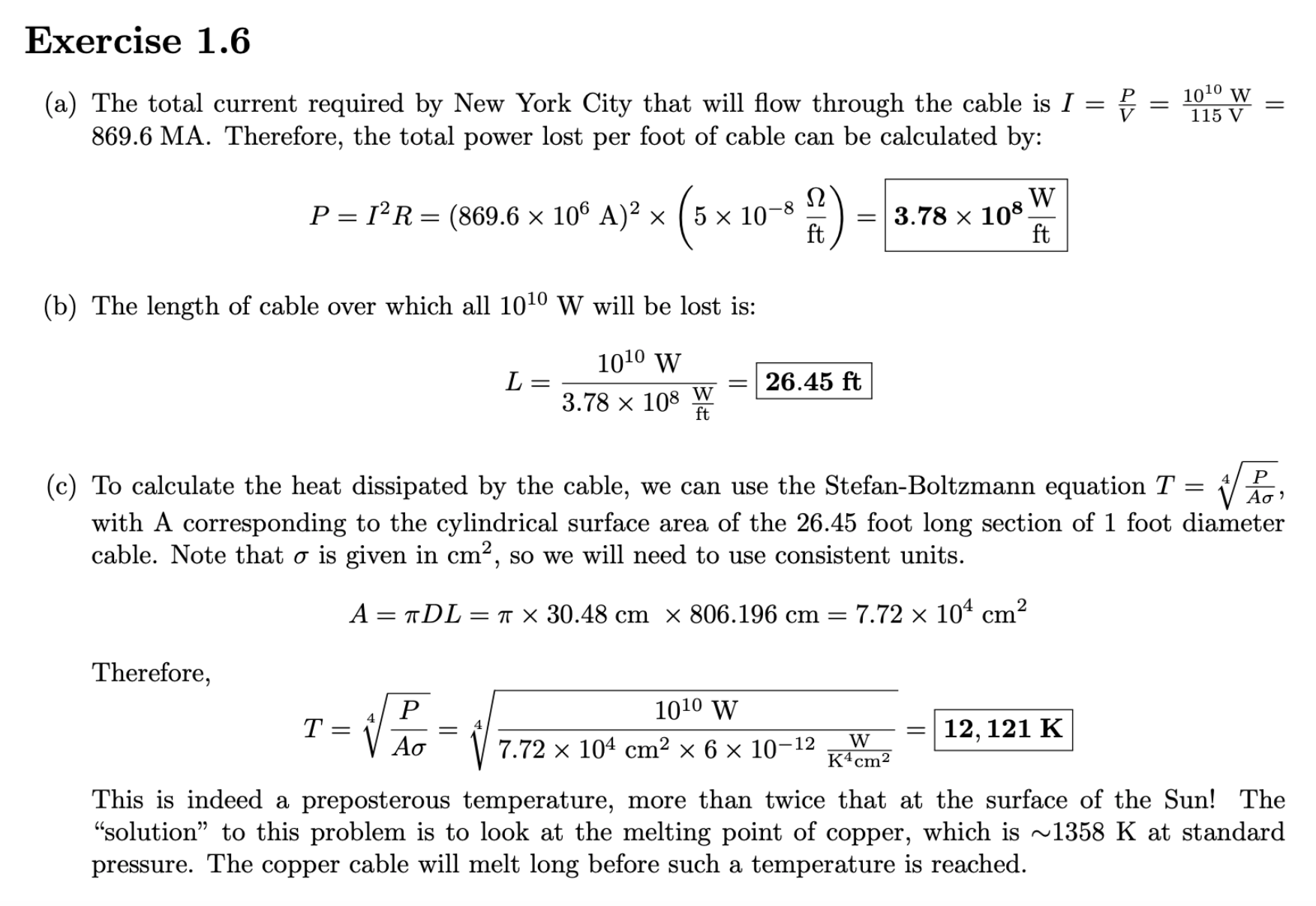 First, the exercise is intended to present an absurd answer (I assume they're using it to lead in to the use of high-tension wires).

Second, blackbody radiation is used for more than things that are perfectly black. The Stefan-Boltzmann equation is only valid for things with a perfectly black surface -- but it's easy to adjust it's effects based on the surface's emissivity, or to adjust the surface emissivity for the purpose at hand (Which is why some heat sinks are black. See my last paragraph).

Copper isn't very emissive (because it's shiny -- emissivity is more or less the reciprocal of reflectivity) but they're trying to show that even if the thing were perfectly black it'd still reach an absurdly high temperature. So for finding the minimum temperature that the thing would reach from radiative cooling, purely radiative cooling, they're on track.

A slightly more real-world calculation would use convective cooling (i.e., air) -- but given the temperature reached with just radiative cooling, you're really just finding that the wire will take about five times longer to explode into copper vapor with convective cooling as it would with radiative.

Radiative cooling really is a thing, and while it's contribution to cooling stuff in air is usually not the biggest factor, it's enough to motivate people to often make heat sinks (and engine cooling fins) black. This post -- Does the paint colour matter on a heat sink? -- does a rough calculation for a given heat sink to find that the radiative cooling in still air is something like 25% of the total (I suspect it's less). For a heat sink in a vacuum, all the cooling is radiative, so "black body" radiation does matter (as does emissivity -- if you see some bit of space hardware wrapped in shiny foil, it's because the designer wants it to stay cool when the sun is shining on it).

Not the answer you're looking for? Browse other questions tagged power temperature cables heat wire or ask your own question.

19
Does the paint colour matter on a heat sink?
0
Calculating the power lost per foot from “\$I^2R\$ losses"

18
How do I calculate the temperature rise in a copper conductor?
6
Design considerations for powering microcontrollers with a 100 m cable
6
How to determine the best diameter for a cable?
0
How is the Correct Surface Load of a Heating Element Determined and Verified?
1
Considering power loss in a simple series connection due to cable
2
Finding the average power dissipated in a resistor
0
Calculate power given PSD and bandwidth?
1
Need help in cable temperature calculations
3
BJT average power dissipation
0
Calculating the power lost per foot from “\$I^2R\$ losses"