If I solder outside do I need a fume extractor

I've been looking into soldering and read up on the health risks and I noticed you need a fume extractor. I was thinking about using a fan but I don't think that safe. If I solder outside will I need to purchase a fume extractor or is the natural ventilation enough, also can I do it in a garage with the garage door open?

Whether my soldering area is fume-extracted (work) or not (home), I make it a habit to take a deep breath before starting, then breathing out gently while I make the joint. This is not a method recognised by any health and safety authority, but it works for me.

At home, by the time I breath any flux fumes, they are diluted by many orders of magnitude in the air of the room, and have cooled down.

I'm managed to get through most of my career without a solder fume extractor despite being a bit sensitive to the flux fumes. Helps that I use rosin-flux and temperature-controlled irons. So you don't actually need it for occasional soldering if you avoid breathing the flux. The smoke does perversely tend to curl up towards the operator. A fan from across the room will prevent that. A nearby fan might cool the solder joints excessively.

Soldering outside would add an additional variable to the soldering if there is a breeze and isn't terribly practical for much of the year here in Canada since gloves and/or below-zero temperatures tend to negatively affect the dexterity.

I recently (this month) threw together a 3D printed fume extractor from a salvaged 80mm 12V power supply fan and 3D printed parts (you can find similar items based on 120mm fans on Thingiverse, and mine was loosely based on those). Mine will take a 5mm activated carbon filter whenever it arrives from China. In the meantime it moves just enough air to make a difference. I used a 9V adapter to keep it quiet, for more airflow a 12V one can be substituted. Other than the $3 filter, out-of-pocket cost was zero. 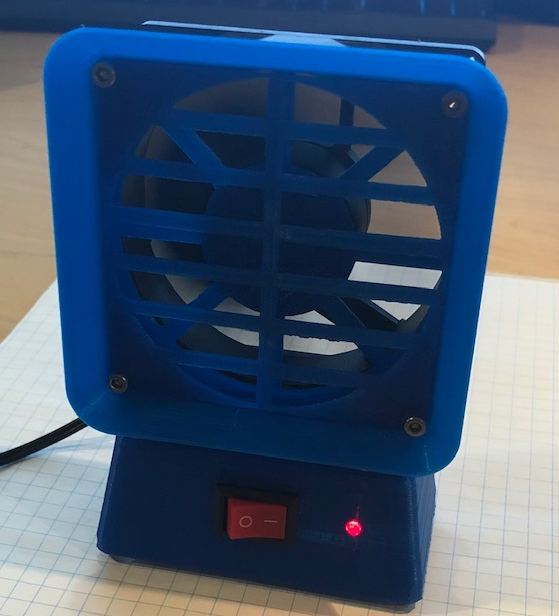 If it's just for occasional hobbyist purposes, then you don't need it - holding your breath as advised in another post is what you'd do then. The main problem is that in order to see what you are doing, you ideally want to have your face just above the object, so the smoke tends to right up into your nostrils, regardless of how well ventilated the room is.

You should seriously be concerned about the fume if you do extensive soldering work, like when mounting a full PCB or series production. Then you need a fume extractor, period. The smoke from the vaporized flux is no laughing matter, it will give you all kinds of nasty allergies and other health problems.

Not the answer you're looking for? Browse other questions tagged soldering or ask your own question.

71
What type of solder is safest for home (hobbyist) use?
10
Which are the safety recommendations for soldering?

7
Ideal location to practice soldering
0
Is there any problem with soldering a charged battery?
0
Fan cools solder down too quickly
12
To blow or not to blow on the joint, that is the question
4
Fan vs. Fume Extractor for Soldering
0
New soldering iron smokes from inside the handle (not from tip) - is this a problem?
2
soldering equipment advice for small parts
2
Should I use a fan or fume extractor for soldering?
11
Are filtered solder fumes safe?