I'm not understanding the concept of L-Pad attenuator other than seeing it as another ordinary voltage divider to attenuate a voltage. Electronics-Tutorials: L-pad Attenuator gives the following description:

Aren't these two equations all I need to match input and output impedance while achieving a specific attenuated voltage? Why are there these logarithmic equations with a 'K' value solving for \$ R_1 \$ and \$ R_2 \$? And what does it mean when they say

What it means is that a simple L-pad made from two resistors can do one of two things: -

But you cannot simultaneously match two impedances AND have independent control of the desired attenuation level. The reason is because there are only two resistors and there are not enough variables (R1 and R2) to get both a defined attenuation AND a defined impedance matching circuit.

To get both, you need at least three resistors. This webpage gives an example and shows the two formulas that define R1 and R2: - 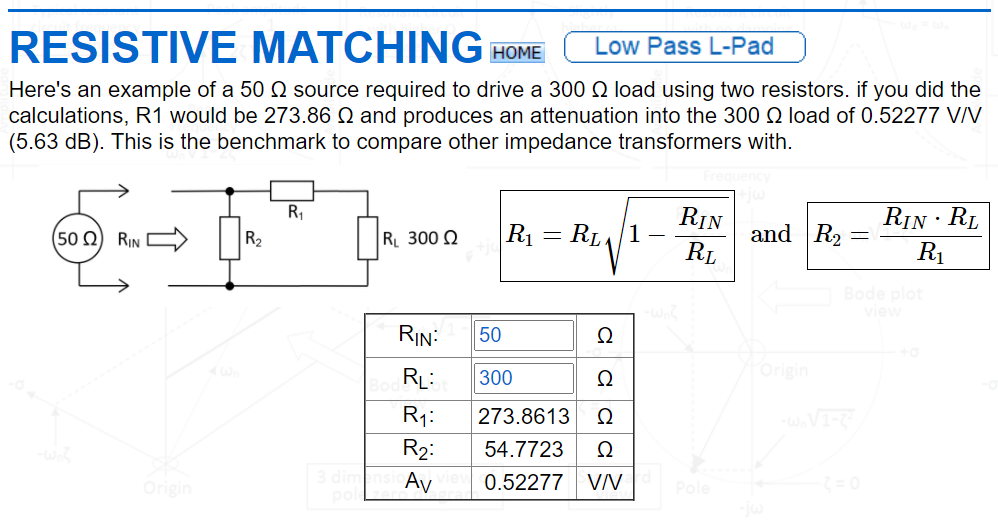 Andy Aka's answer is definitely correct and provides good insight into the problem. Here I will just try to provide an answer to

Such equations provide a direct link between the attenuation you want to obtain and the resistors in your L-pad attenuator when source and load impedances are the same (\$Z_S=Z_L\$, as you can see in the tutorial you mention) and you want to match your attenuator to the source impedance (not an optimal choice, as the tutorial itself points out).

The above allows you to set the desired attenuation \$K\$ through a circuit that is matched to your source only, as you can easily see by taking the values obtained in the tutorial: \$Z_S=Z_L=R_2=8\,\Omega\$ and \$R_1=4\,\Omega\$.

Not the answer you're looking for? Browse other questions tagged voltage-divider impedance-matching attenuator or ask your own question.