How individual LEDs in LED strips (or matrixes or cubes) are being powered when supplied with >=12V instead of 5V?

I've been wondering about LED strips and how its individual LEDs are being powered.

My knowledge about LEDs is very basic. I know they're diodes, I know they tend to draw more current than what's good for them, hence current needs to be limited. That happens e.g. via a constant current power supply or a resistor in front of every LED. Former one, as far as I get it, only makes sense if you know exactly how much current is to be drawn, which maps to the need of knowing the exact amount of LEDs to be driven, which is is not the case for LED strips which you can cut almost everywhere. On top - at least that's what I'm assuming writing this post - individual LEDs need to be supplied with moderate voltages <= 5V, otherwise they might get damaged.

So, there's those WS28xx protocol driving LED strips, cubes, matrixes, .. where you're able to address single (groups of) LEDs individually.

And then there's those "5050" LEDs, which I understand as physical packages for (RGB(W)) LEDs having whatever control logic on top of it (e.g. implementing one of those WS28xx protocols).

There's those famous WS2812B LED strips with 5050 packages containing RGB LEDs where you can't only address every single RGB 5050 package, but also every single physical LED inside (=every color). Those strips can be cut after (almost) every 5050 package and are powered by 5V which makes sense to me, as you can "just" power each physical LED with those 5V (again, limiting current still necessary). Then there's those WS28xx strips which can be powered by 12V where however only LEDs of groups of three can be individually addressed (which probably doesn't mean the three physical LEDs (=colours) in one 5050 package, but one physical LED (=colour) in three 5050 packages). Which also sounds sane to me, as 12V/3 = 4V which probably is also fine to drive individual LEDs.

Makes me wonder though, how to cut the strips then. According to my understanding I would also only be able to cut them into groups of three, as if the last part would be only a group of two or even one 5050 package, they would receive a too high voltage of 12V/2 = 6V or even 12V/1 = 12V. But at least the dumb (=non-WS28xx) 12V/24V RGB as well as white-only strips I have here I can apparently can cut after each 5050 package.

Then there's the relatively new WS2815 RGB LED strips, which are also powered by 12V, can be cut after each 5050 package, and where every physical LED (as in: every colour within each 5050 package) can be individually addressed without any grouping.

How do those >= 12V LED strips - which can be cut after each LED / 5050 package - manage to drive the individual (physical) LEDs at non-damaging voltages?

Half-knowledge: I doubt every package has a DC-DC step down converter in it - would be too big / costly. Also, I can't imagine the remaining energy (12V-5V = 8V) just being dispersed as heat (sounds like a horrible waste of energy and I'd also wonder if those strips could even handle the heat). When looking at some (admittedly rather dodgy) datasheets of the new WS2815 strips, I can see for some there's a mention of some 2kHz PWM control as part of the 5050 package. Are those individual physical LEDs maybe PWM'ed by >=12V in a way so they don't get damaged? If not that directly(because it's still >=12V) I could imagine the PWM curve being flattened so it boils down to some reasonable voltage? This only speculation based on half knowledge, though..

how to cut the strips then

Where the label says ;)

Standard 12V LED strips use series strings of LEDs. Since the Vf of a white LED is a little bit above 3V, they simply wire 3 LEDs in series which makes a bit more than 9V. A current setting resistor is added to each series string to soak up the extra voltage.

24V strips use the same arrangement with 6 or 7 white LEDs in series. If they use 7 LEDs instead of 6 you get a little bit more efficiency since less voltage is wasted in the resistor, at the cost of a worse current regulation since current will depend more on voltage.

So if you look at the strip, you'll see one resistor per series string of LEDs.

Now you could say... red or green LEDs use less than 3V so surely we could use more LEDs in series... I've never seen a strip that does that, presumably they use the same PCB for all colors, which means red strips waste a lot more voltage on the resistor. 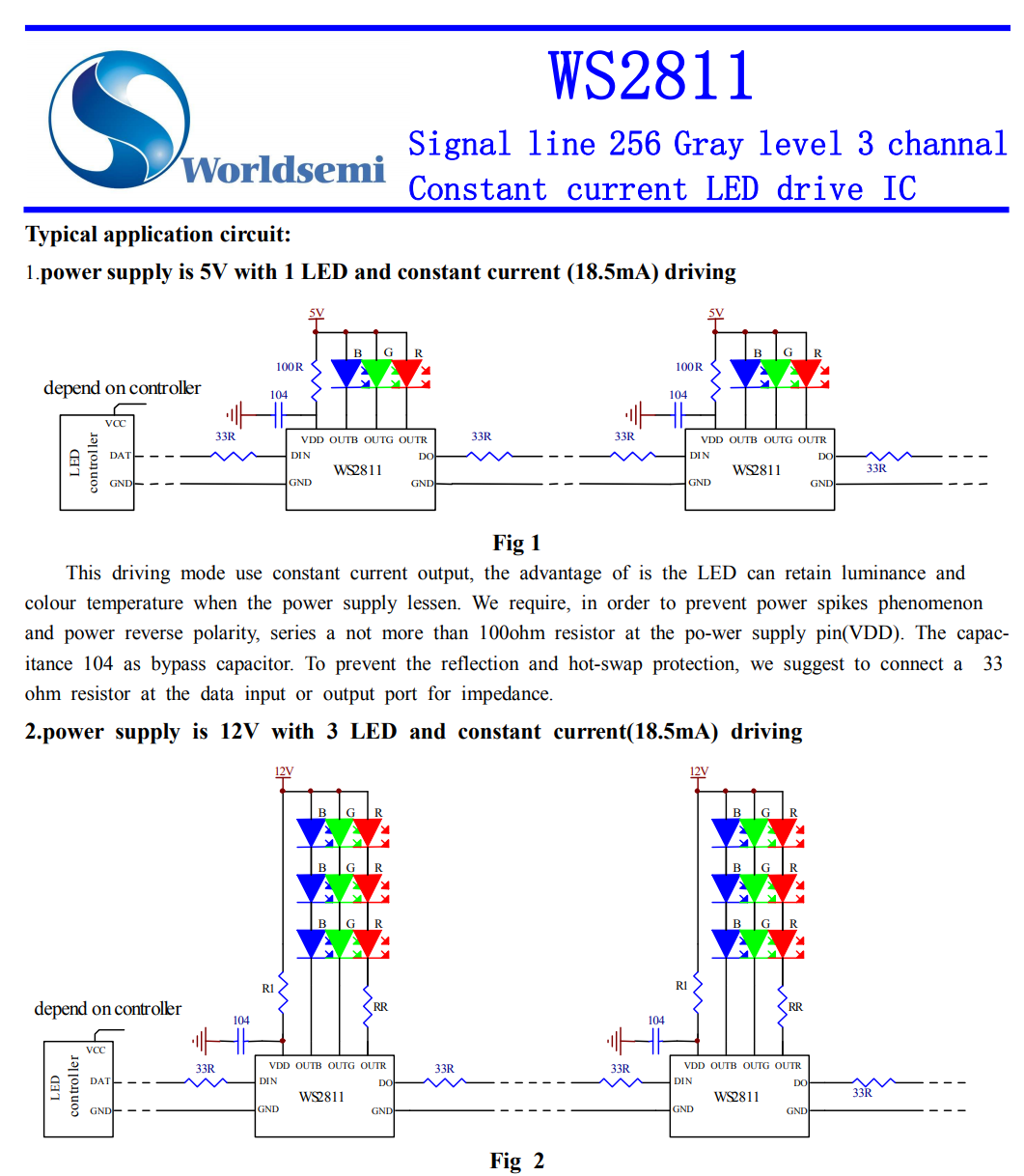 This is the WS2811 chip which is similar to what you'll find inside a WS2812 LED. As you can see from the schematic, it has three constant current sources (one per color). So it needs a supply voltage equal to at least the highest Vf of all three LEDs, which will be the blue at around 3V, plus whatever voltage the constant current circuit inside the chip requires. And yes, excess voltage is turned into heat. This is a problem for green and red, which have lower Vf, thus more wasted voltage.

Note that LEDs are driven with constant current by a circuit inside the chip, that is switched on and off by PWM. LEDs are not connected to supply voltage directly by a simple FET switch, as your question implies. Basically, if the supply is 5V and the LED needs 3V to get the desired 20mA current, then the circuit in the chip will drop the extra 2V. So you get 3/5 useful power into the LED, and 2/5 wasted as heat.

The illustration above also shows a way to use a higher power supply voltage by wiring more LEDs in series. In this case, you'll no longer get individually addressable pixels since each chip controls 3 RGB LEDs, but you'll get higher efficiency, lower current, and better tolerance to voltage drop along the strip. It could also be cheaper, since it uses less chips. This is what you'll find in those 12V or 24V addressable RGB strips that can only be cut every 3 or 6 LEDs.

Another option is GS8208 ; I believe WS2815 uses the same arrangement: 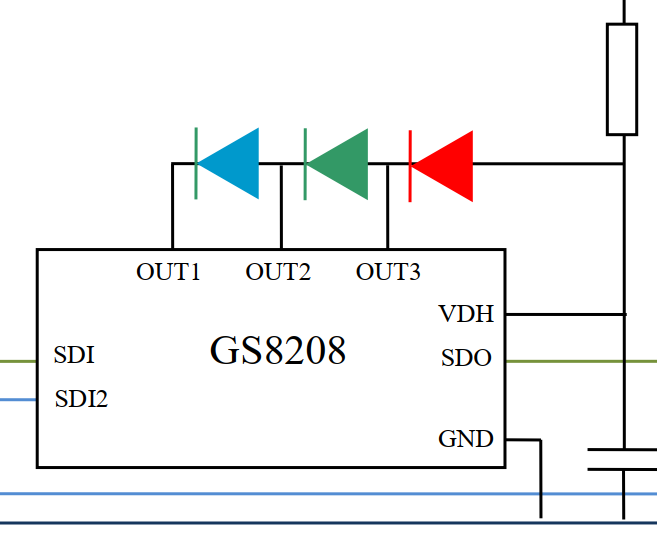 This one has only one constant current source, and it wires the LEDs in series, with internal FETs that short the LEDs that are not in use. So, one chip can control one RGB LED with 12V and minimum waste of voltage.

If you want white light, then 12V GS8208 will be more efficient than 5V WS2812, but if you only want red or green or blue, it will still use the same amount of current to power a single color LED from 12V, which means all the excess voltage will be turned into heat inside the chip, and it will be less efficient than WS2812...

The WS28xx series leds have an ic in them to do the PWM and the protocol. Therefore it is not unreasonable that the 12V ones (and the 5V ones for that matter) manipulate the PWM such that the LEDs themselves don't get damaged. One thing to note with LEDs is that the current has to be limited, not the voltage but the voltage has to be sufficient in order to light the LED (which varies based on the actual LED and the color).

Not the answer you're looking for? Browse other questions tagged voltage led pwm led-strip ws2812b or ask your own question.

6
What is the correct supply voltage for LEDs?

1
Powering and controlling multiple 12V LED strips with Arduino LilyPad USB
2
powering 12V 5m/16ft 5050 RGB LED Strip with 16V power adapter?
0
Multiple LED's, one controller, diagram included
4
How to separate the schematic of a RGB LED into 3 individual LEDs in Altium?
0
Individual Led vs LED Strip
1
Controlling individual LED strips of different kinds and lengths with a single microcontroller
2
What power supply do I need for my LED light strips?
1
Combine Power Suplies?
4
DIY LED lamp is less powerful than expected
0
Cutting and joining a LED strip that has no solder pads?