Two TPS5430 inverting buck-boost converter modules failed in a row, am I using them wrong?

I've bought three of these inverting (negative voltage) DC-DC converters. I'll include hi-res images of the module's PCB at the end of my question.

Two of the three failed in a row during initial testing from a bench power supply, and now I'm afraid to even power on the third one because I really need it working for my project.

The second module: I thought maybe some load is required for normal operation, so I connected a small 3-digit LED voltage meter module, about 12 mA current draw at 12.2 V. This module survived going over +12 V Vin, I tried up to +17 V. Then I left it on at +12 Vin and looked away for a minute or less, when I returned - it was fried just as the first one, except there was no smoke nor a spark.

I did some searching online and found a TI application note for building a TPS5430 inverting buck-boost converter. I don't see any usage limitations that I might have broken when testing my modules, but also, the TI circuit has a single inductor and my PCB has two of them so they're not an identical design.

Do you have any idea why two out of two modules the I tested died almost immediately with small load or no load, and whether I can do anything to keep the last remaining one alive and working with 0-100 mA of output current?

Photos of my regulator PCB: 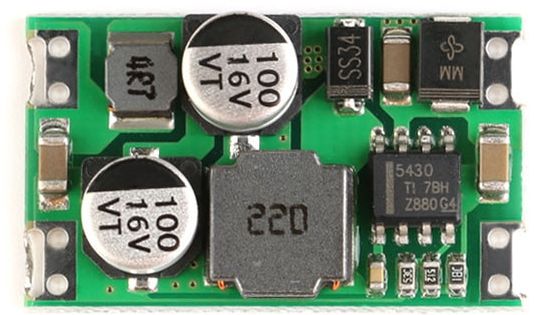 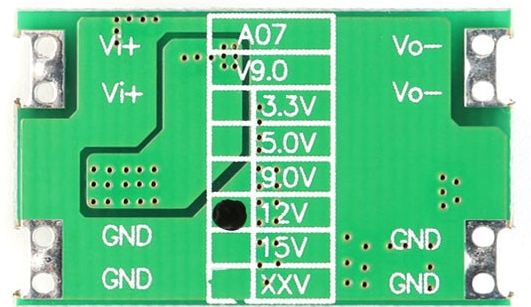 From the application note you linked to:

The output voltage is negative and is available at the device ground pin; so, the effective voltage across the input of the device is Vin –Vout. This difference must not exceed the input voltage rating of the device. Make sure not to tie the ground of the device or the exposed PowerPAD™ package to the system ground.

That is to say, the \$V_{in}\$ maximum rating applies to the difference between the input voltage and the output voltage. That's about 24V for your inverter (12-(-12)).

The real sticking point would be the voltage across the built in switching FET. It has the same limit as \$V_{in}\$, but is in a position where it may be exposed to higher voltages (ringing in the inductor.)

I think you have two options:

Not the answer you're looking for? Browse other questions tagged dc-dc-converter buck-boost or ask your own question.