By knowing that I do not know the plant transfer function of the forward converter operating in current mode control, I can be suspicious on the result provided by the following document : https://cbasso.pagesperso-orange.fr/Downloads/PPTs/Forward%20small-signal.pdf

Nevertheless as the man who writes the document is clearly one of my master (as Yoda would be if I were a Jedi), I am pretty sure that the results are correct.

But there is something that I do not understand : the placement of the average pwm switch and the absence of the diode on the secondary side (it seems that the diode at the secondary has been placed at the primary, nevertheless how can I say that it wouldn't have influence on the transfer function result ?) :

An other point the placement of the average pwm switch depends on the type of controller : (voltage mode or current mode) 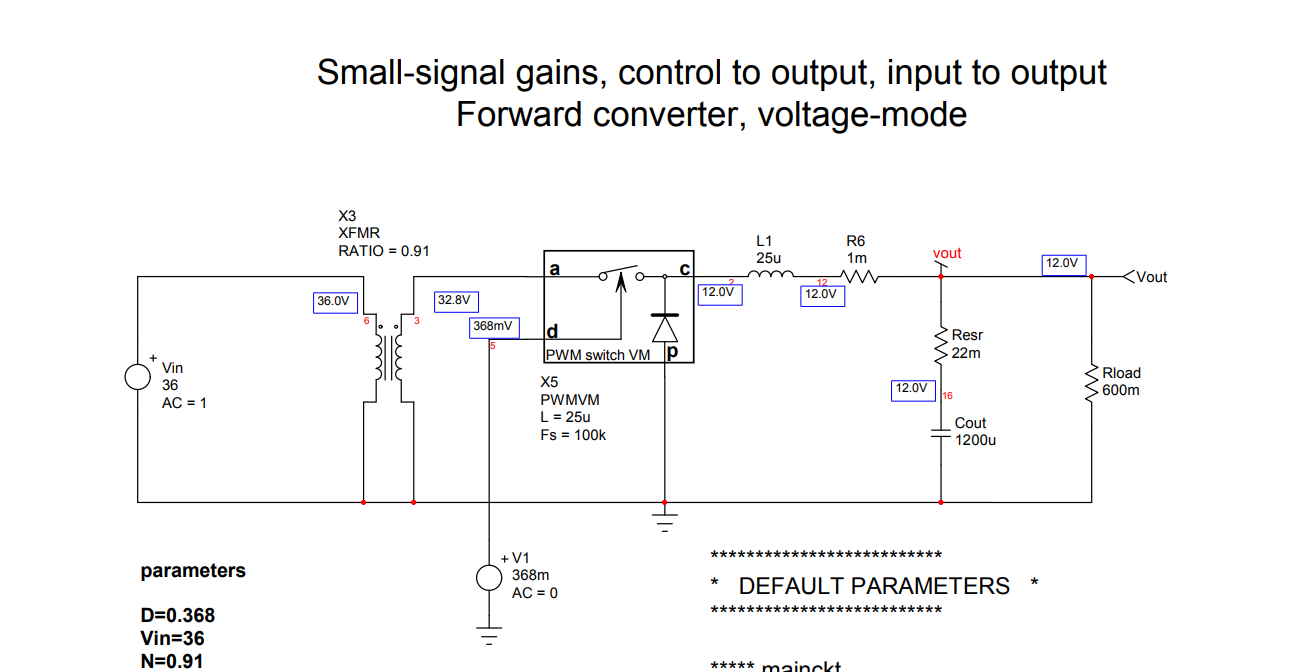 Can someone help me to understand how the pwm switch is placed ? and why one diode is missing on the secondary side ? (it seems that the diode at the secondary has been placed at the primary, nevertheless how can I say that it wouldn't have influence on the transfer function result ?)

My final goal is to simulate the plant transfer function of a two switch forward converter in current mode controller. From my side, It would be really really hard for finding the transfer function manually as there are 2 switches and a transformer ? Isn't it ?

Thank you very much !

The forward converter, whether is it a single- or a two-switch version, is a buck-derived topology. It means it can be simulated as a simple buck whose input voltage \$V_{in}\$ is scaled by the transformer turns ratio. Remember that a buck can be seen as a low-impedance square-wave generator driving an \$LC\$ network. In a classical buck, this square-wave signal peaks to \$V_{in}\$ (neglecting all voltage drops) while in a forward converter, it peaks to \$NV_{in}\$ if the transformer offers a 1:N turns ratio:

In CCM operation, the output voltage of the forward converter also undergoes a scaling by N.

Now, to simulate the converter using an average model, you can place the dc transformer (an equivalent transformer accepting dc bias for the purpose of operating points determinations) in front or after the PWM switch:

However, if you choose the second option, do not forget to reflect the output inductor to the model side as the PWM switch stands in the primary side of the transformer. You can see that all operating points are similar as are both control-to-output ac responses: 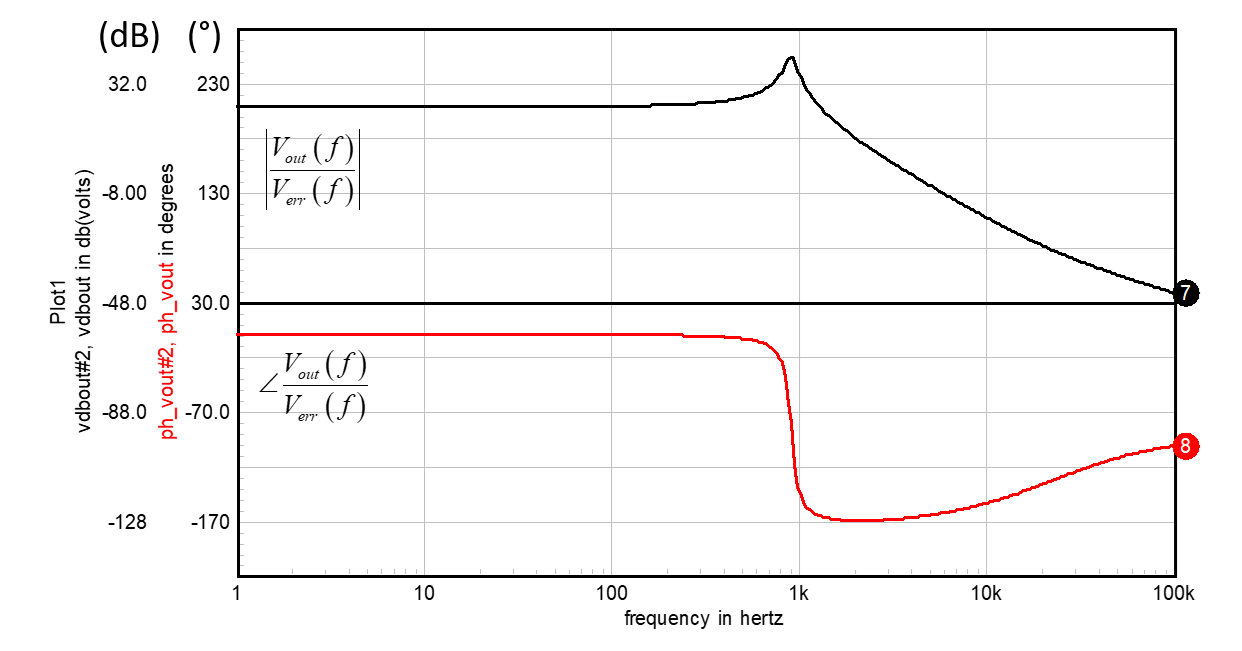 For current-mode control, the principle remains the same except that we have the sense resistance \$R_i\$ located in the primary side while the output inductance lies in the secondary side. So depending on your transformer position choice, you'll have to scale \$R_i\$ or \$L_1\$:

In this example, if you keep the transformer after \$V_{in}\$ then you consider the response in the secondary only and the sense resistance is reflected to the secondary side (because it lies in the primary) with the PWM switch model and that is all. If you prefer having the transformer inserted in-between, which perhaps makes more practical sense, then you have to reflect the output inductance while the sense resistance does not change because the PWM switch is in the primary side. The bias points are the same and also the ac responses: 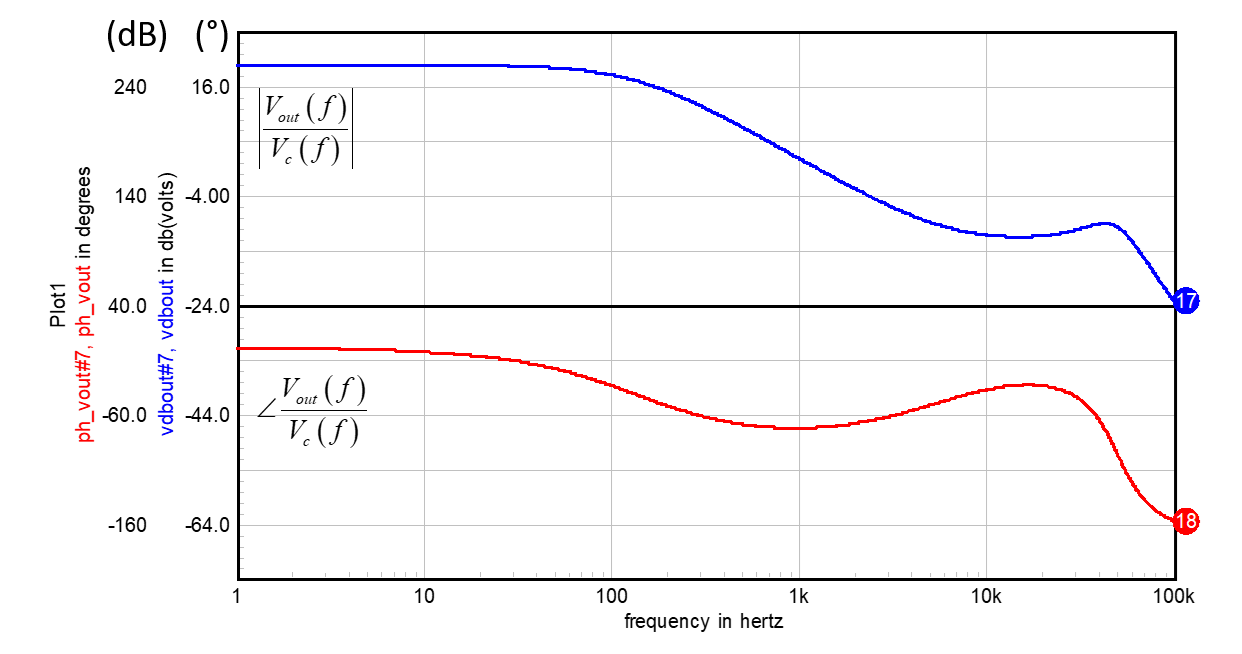 Now, if you try to calculate the output voltage of the forward converter in a more precise way, you need to account for the diode forward voltage drops. These drops are weighted by the duty ratio \$D\$ as the first diode is active during the on-time and \$1-D\$ for the freewheel diode active during the off-time only. Adding a series diode as I did in the first place is an over-simplistic way of modeling the drop. The diode that you drawn is not necessary as there is no switching component here. A comprehensive model requires two extra sources accounting for the above duty ratios. I covered this approach in an article published in How2Power some time ago.

To verify the response of your converter, you can surely resort to one of my average models in SPICE but you could also use one of the ready-made switching templates I purposely built in SIMPLIS. They are described here and feature single and two-switch forward converters which work on the free demo version:

and if you check their ac responses, they are rigorously identical: 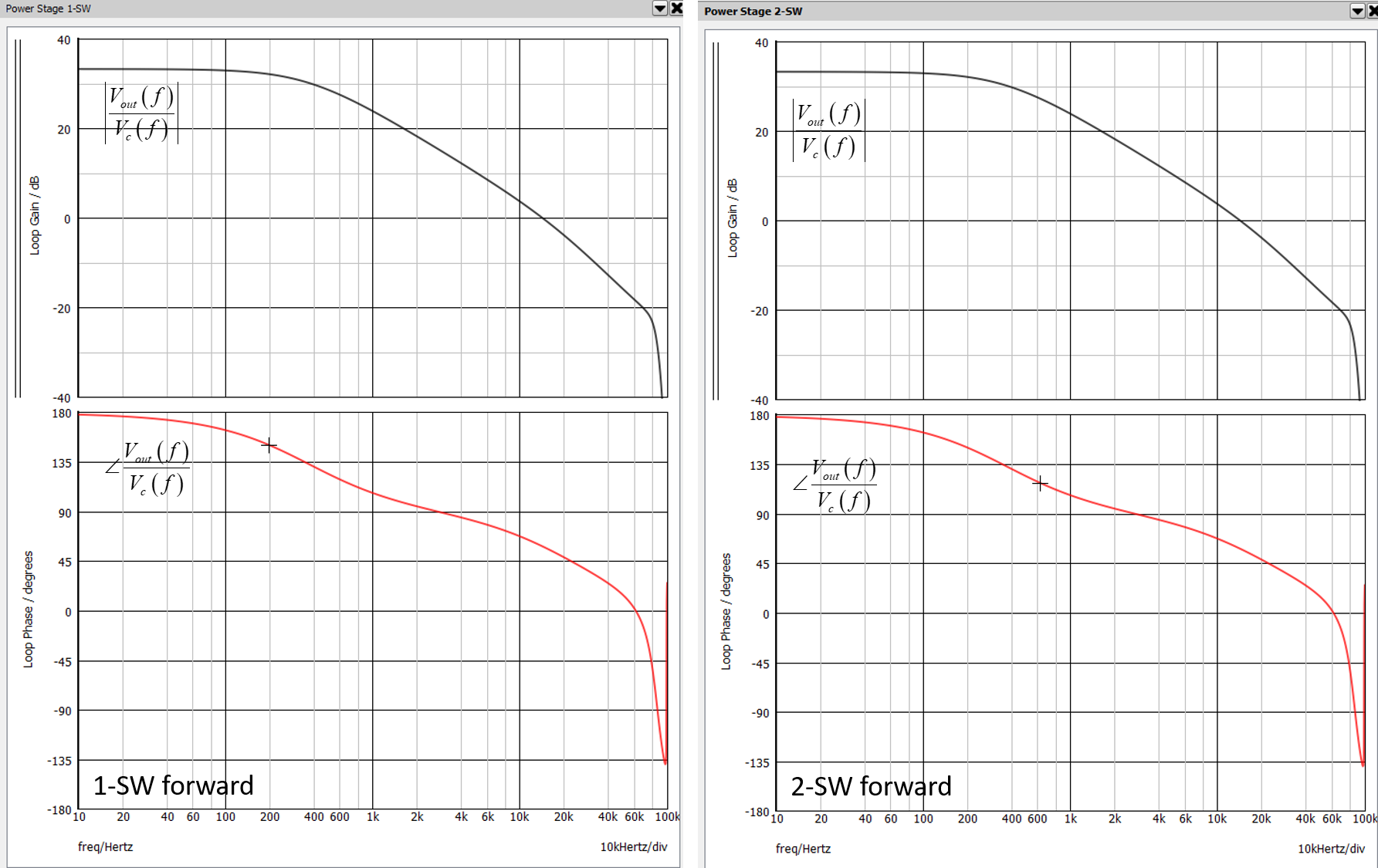 The control-to-output transfer functions of single- or two-switch forward converters are the same and can be successfully studied with one PWM switch model.

Not the answer you're looking for? Browse other questions tagged switch-mode-power-supply control-system small-signal or ask your own question.