After getting some helpful critiques from my original post;

I worked on my design and made a few major changes.

I have added some copper around the pins in an effort to remove heat from the IC. The only thing I'm presently worried about is if the trace for the feedback voltage is too long. 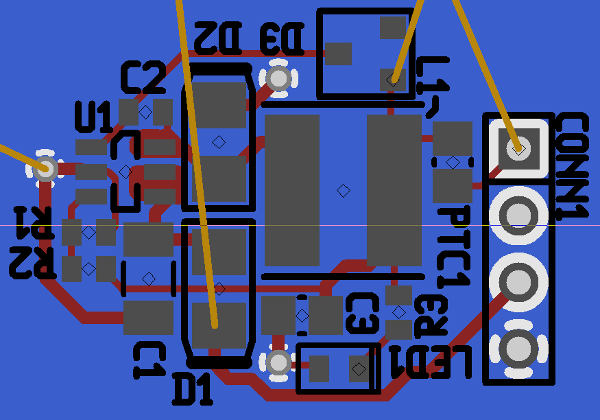 Yellow is the critical current flow out, not sure where it goes from the output cap, C3.

Keep in mind your goal is to minimize the size of this loop and minimize the resistance between yellow/pink at high frequency, (minimize impedance to ground).

Lets just quote the datasheet since it covers all of this:

"When planning layout there are a few things to consider when trying to achieve a clean, regulated output. The most impor- tant consideration when completing the layout is the close coupling of the GND connections of the CIN capacitor and the catch diode D1. These ground ends should be close to one another and be connected to the GND plane with at least two through-holes. Place these components as close to the IC as possible. "

C1 and D2 in this case. C1 has a really, really, long path to ground for a power supply decoupling cap. Its also on the other side of the circuit from D2's ground. When your talking about high frequency PCB design when it says "tightly coupled" that doesn't mean just both tied to a ground plane. It means both ground pins are right next to each other, with a surface polygon pour connecting them and multiple via's to a ground plane right next to the pads.

"Next in importance is the location of the GND con- nection of the COUT capacitor, which should be near the GND connections of CIN and D1."

C3 is the output cap and its ground is roughly as far away from the other 2 as you can get.

Think your ok with this one, your probably better off running the trace from C3 further away from the inductor but its probably ok.

"High AC currents flow through the VIN, SW and VOUT traces, so they should be as short and wide as possible. However, making the traces wide increases radiated noise, so the de- signer must make this trade-off. Radiated noise can be de- creased by choosing a shielded inductor."

If were you i'd just use polygon pours for most of these connections, just make sure you have appropriate filtering in place and a shielded inductor.

"The remaining components should also be placed as close as possible to the IC. Please see Application Note AN-1229 for further considerations and the LM2734 demo board as an example of a four-layer layout."

If using 4 layer why not reference that app note? pretty much covers using a big ol' ground pour for the critical ground return and a pour for the SW output.

Not the answer you're looking for? Browse other questions tagged buck switch-mode-power-supply or ask your own question.