UART clock into receiver and transmitter

So below is a receiver diagram taken from: https://people.ece.cornell.edu/land/courses/ece4760/PIC32/Microchip_stuff/Ref_Manual/section_21_UART.pdf

I can see that there is a clock "BAUD rate clock from baud rate generator" It enters into the divider, is this the divided clock? Or is it the system clock which is divided by the control signal BCLKx? 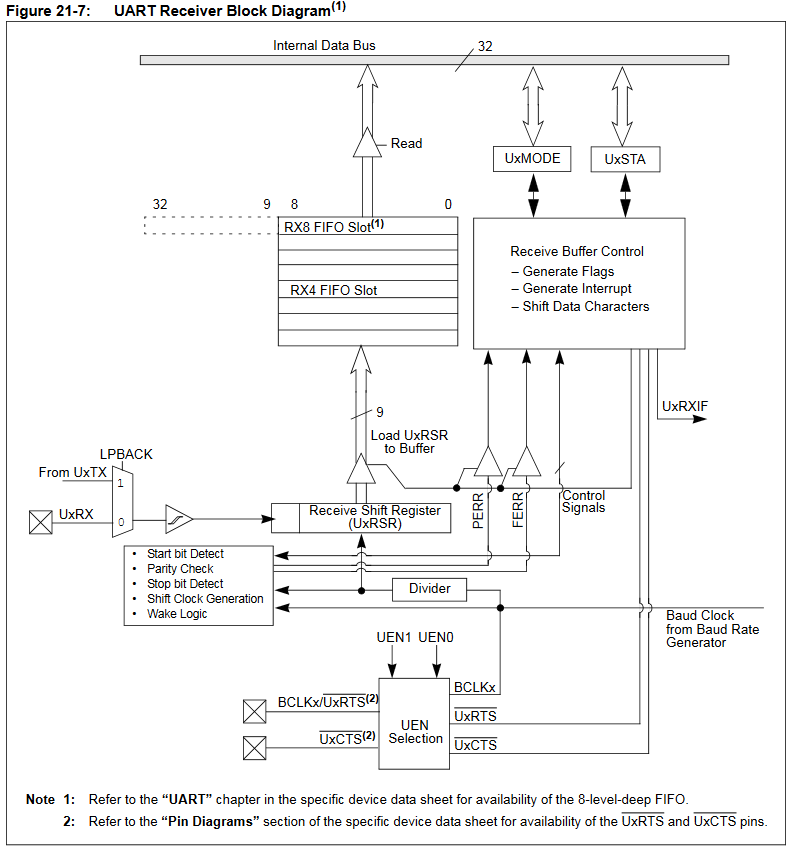 The clock coming from the generator would be (typically) 16 times the baud rate, to allow for oversampling of input data by 16x. So each bit on bus is 16 clocks.

So as per above, the generated shift clock would load in data bits from middle of each bit.

Parity checking would make sure that when parity is used, a parity bit that matches the data and parity settings is received, otherwise a parity error is signaled along with the received byte.

Stop bit detection would check if the expected stop bit of a data frame is idle, otherwise there is something wrong with the reception and the received byte is signaled with framing error.

Wake logic can wake up MCU from sleep mode when there is a frame being received.

I can see that there is a clock "BAUD rate clock from baud rate generator" It enters into the divider, is this the divided clock?

So, if you search (CTRL-F) the document for Baud clock you find this: -

So no, it is not the divided clock because normally it is 16x the baud rate. It feeds into a divider anyway so it would be pretty useless if it was toggling at the baud rate.

They are event flags for use by some other unspecified logic.

Not the answer you're looking for? Browse other questions tagged pic uart or ask your own question.

1
VHDL USB UART Problem
1
PIC32 UART buffer overrun in MIDI receiver application
1
Why does the UART not report an error for a data byte with wrong parity?
1
UART RX in VHDL
3
How do you determine which baud rate to choose, its relation with MCU clock and oversampling at RX
1
Difference between UART and USART and the essense of oversampling on STM32F4
3
STM32 UART Blocking Receiver Not Putting Data In Array, Overrun Flag