How to redirect electric field lines with a copper plane

I have been testing a capacitive sensing circuit in which an electric field is projected vertically to sense a finger (a grounded conductive object). On the PCB, a tx and an rx are 2 copper structures that act as the 2 plates of a variable capacitor. The nearby grounded finger redirects some of the EF to ground and lowers the capacitance between tx and rx like so: 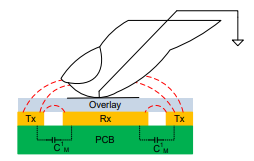 Now, I have been testing this same circuit with a floating copper plane (notice the difference as this plane is floating, whereas the finger acts as a virtual ground) and I have been explained that doing so will ease the flow of the electric field lines between tx an rx and increase the capacitance (again, notice the difference as the grounded finger reduces the capacitance by redirecting some field lines to ground)

I have been able to get results that match with this explanation. on the image below, the sensor "raw counts", which are inverse of capacity, lower when I lay a floating copper layer on top of the PCB:

The theoretical explanation I was given implies that the floating copper plane pressed against the pcb increases the capacitance between rx and tx as we just seen by (acting as a mirror maybe?) compressing the electric field lines and thus sort of reducing the distance between the capacitor plates (correct me if this is wrong).

My question is: Which laws of physics explain this electric field line "reflecting" phenomenon? Why am I able to reflect and condense the electric field with a copper plane?

An easier way to understand this is to realize that when a copper plate is placed above the circular conductors it's essentially creating a capacitor with capacitance between the three conductors. The middle conductor will be floating at DC, but touch sensors are AC measurements so DC doesn't really matter. The diagram below shows three capacitors, but two of them are actually the same capacitance because of the outer ring.

The nice this is this capacitance can be estimated easily (there is some cross capacitance that is not shown, but the effects will be minimal from this), all you need to know is the distance between the plate, the area of the copper and the relative permittivity of the materials (or air) in between.

Since there is already a small amount of capacitance between the plates (Cm) adding a copper plate above will create more capacitance and increase the current between the Tx and Rx plates. So a better way to look at it is instead of reflecting RF, you are increasing capacitance.

I haven't looked at the datasheet to know how the sensor data relates actual capacitance, I would guess that a higher sensor number indicates lower capacitance.

1
What exactly does a capacitive touch screen need to register input, and how can that signal be produced?
2
Why does the human skin steal field lines when it's very non-conductive in dry state?
0
Does (stray) capacitance depend on voltage?
2
Questions about capacitive sensing
4
Mutual capacitance sensor behaviour
2
How to measure the potential gradient between large capacitor plates?
6
Finding the electric field due to a "point" dipole in different locations
0
How do self capacitance touch screens work?