We're routing a PCB for a LM5085 buck controller of 8 pin WSON package with a maximum input of 75V. My questions are for the relatively high input voltage

Its really not IPC2221 you need to worry about... that is more of a guideline. What it really comes down to is: Does this need to pass regulatory? And secondly what is the risk of this circuit burning up?

If the circuit needs to pass regulatory then it will need to adhere to IEC61010 creepage and clearance requirements (shown below). The problem with this is the spacing on the WSON package.

The spacing on the WSON between VIN and the thermal pad is ~0.3. The category that circuit would be in would be B2 or B4 (with coating if it were coated). The voltage between conductors would be 51-100V so a spacing of 0.6mm for B2 and a spacing of 0.13mm for B4. If the product is uncoated, then it would fail the IPC creepage spec. 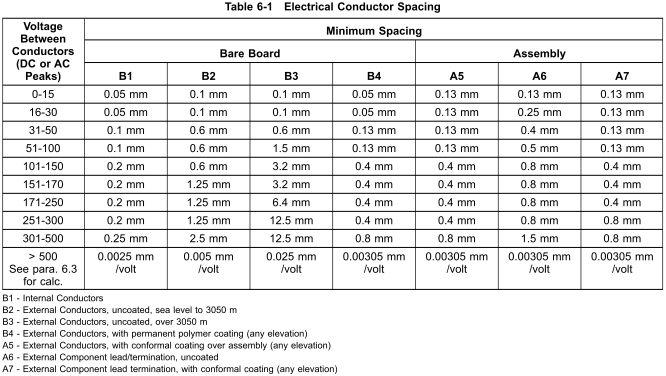 If you don't need to follow IPC/UL specs, then don't worry about the spacing except it will be dangerous with the WSON. Any pollution (IE dust, solder, flux, moisture) could set off an arcing event on the WSON. If it were me I would reduce my worry and steer clear from that package as I would then have to worry about keeping it clean and arcing. So unless you really have your heart set on the WSON, the HVVSOP has an 0.56mm clearance (which could probably also be made 0.6mm with some "finagling".

As far as the resistors go an 0402 could have just over 0.6mm of clearance (0.635 but it really depends on the footprint), so that should work for 75V (which was actually surprising to me) 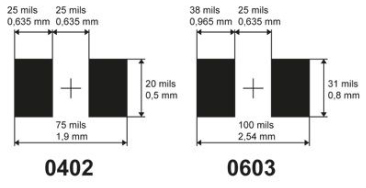 Psens does between Vin and Vcc, and Isens is normally connected to a sens resistor on the external FET.

So it seems that TI thought of this - the voltages between adjacent pins on that side of the chip are nowhere near 75V, even with 75V in.

Not the answer you're looking for? Browse other questions tagged pcb buck ipc or ask your own question.