I have a question about designing a charge amplifier. 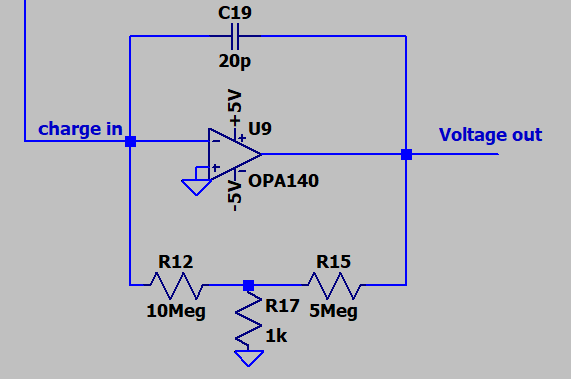 I am currently using this simple setup for my application. As input, I can use several commercial piezo-based accelerometers. I need a pretty wide bandwidth (up to 0.1Hz). Instead of a high valued resistor (which would be about 1000 GOhm) I use a T-network instead.

The amplification of the accelerometer signal works fine. However, the offset of the signal is rather undefined. It drifts all the time between the two rails of the OPA.

I understand that with a defined offset, I can perform a correction at the IN+ Input of the OPA. But as the offset is drifting there is no chance with this method.

I know, that with 20pF, the amplification is pretty high (I need it for the detection of seismic activity). But also if I replace the capacitor with 2.2nF, the problem remains.

At last, when I apply a high signal to the circuitry (for example harsh shaking of the accelerometer), the signal goes into the rails of the opa. It stays there for a certain time until it recovers.

After the recovery, the offset of the output has changed considerably. Not like a drift but a stepwise change.

I suppose the whole effect is due to a charging effect somewhere. But as I am not really a specialist in analog circuitry, I cannot see where.

Probably it is connected to the pretty high resistance in the feedback. But I really need this bandwidth. And I have seen in published papers that these high resistors are not unusual for detecting seismic activity.

I hope you guys can help me. Thanks in advance.

Add a capacitor in series to R17 in order to lower the DC gain. Like this: 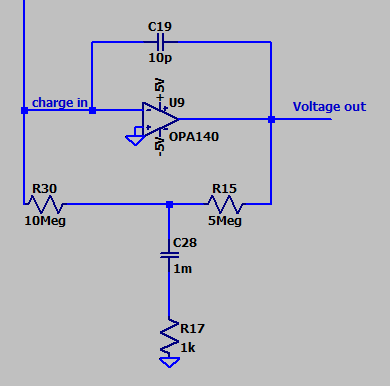 However, as Bimpelrekkie also mentioned, the capacity must be very high in order not to alter the cut-off frequency at low frequencies. LTSpice shows that with a 1mF capacitor this is guaranteed. Unfortunately, I don't have this high valued capacitors in stock. So I cannot test it immediately.

Proposal from Andy aka:

Andy aka proposed to short out R17 and decrease C28 to roughly 3uF. Like this: 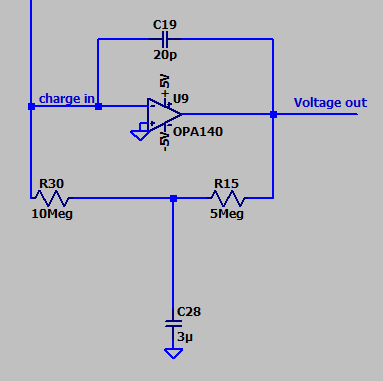 However, this not only drastically changes the transfer function of the charge amplifier, but also creates an unwanted resonance at low frequencies.

Proposal from Andy aka #2:

Andy aka proposed, in order to simulate my setup correctly, I have to put the capacitor, defining my accelerometer, parallel to a current source.

So up to now all simulations in LTSpice are performed like this (capacitor in series with voltage source): 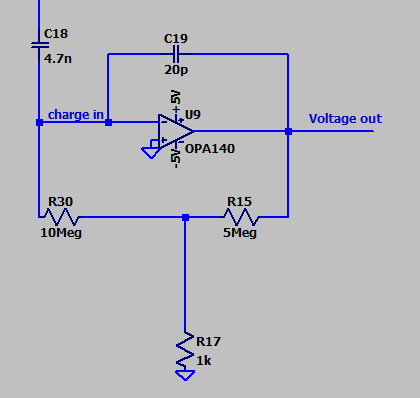 In Spice, I just put a capacitor in series with the voltage source to simulate the stuff.

This is probably the wrong way to simulate the circuit. The normal way is to use a current source in parallel with the capacitance of the accelerometer. What value source capacitor did you choose for the simulation?

The accelerometer has roughly a capacity of 5nF. Therefore I have chosen this. Is this wrong thinking? Oh, that would be embarrassing

Well either you have the red face or I do but firstly, we should look at the reasoning behind your dc feedback network. I think you have gone for the 5000:1 attenuator so that you can choose a 10 MΩ feedback resistor so that input bias current effects are minimized. Looking at the op-amp data sheet, the bias current is worst case 10 pA at normal temperatures and through a 10 M&ohm, resistor, this will produce an input voltage offset of 0.1 mV. The feedback resistors provide a gain of 5000 so that immediately puts the offset output voltage at 0.5 volts and it's becoming problematic.

Changes in temperature of the device could make the offset input current 2 to 10 times worse and this is probably what you see.

So, back to basics (with me being prepared to be red-faced), use only unity gain feedback; maybe 15 MΩ: - 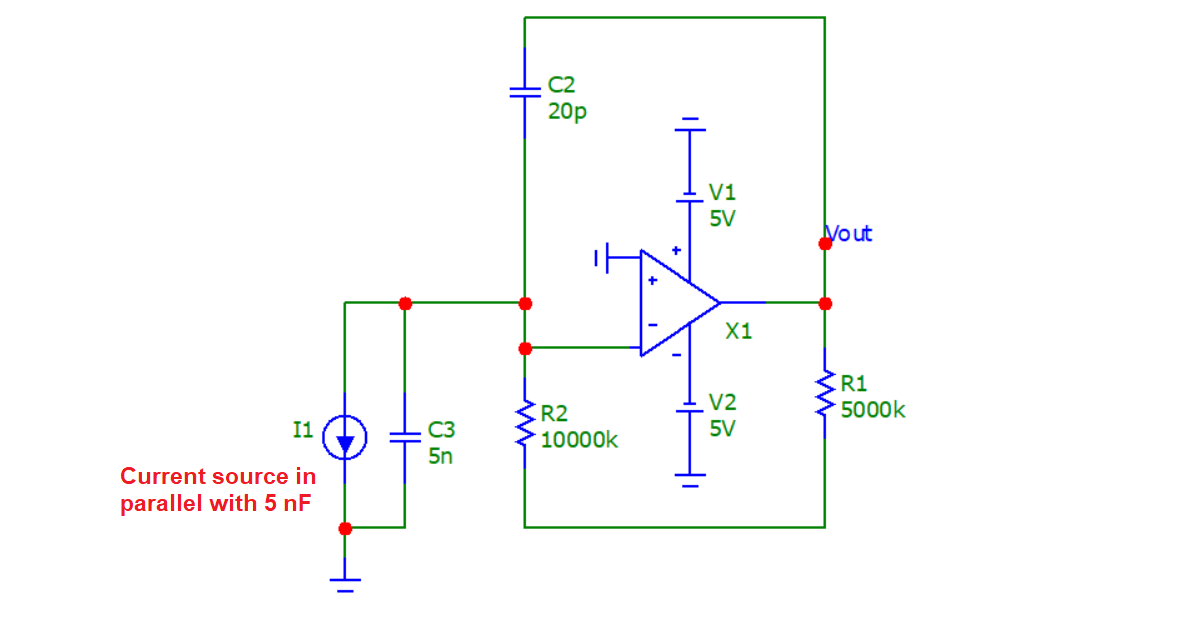 The AC response is now this: -

And that looks OK to me.

This is how I would set-up a simulation to design a charge amplifier and it's how I'd analyse the op-amp's input current in order to decide on an adequate DC feedback system.

Of course, I'm sticking my neck out but I thought you appreciate some tangible help even if I missed something important.

The problem is the limitation on open loop gain. In the picture above, I simulated using an OP4177 device and it's model has an open-loop gain of 100 million (160 dB) but this is not what you will find with most op-amps.

So with red constraints at 0.1 Hz and 10 kHz and a purple constraint at 160 dB, all you can play with is the feedback capacitor and it looks to me like 20 nF (as opposed to 20 pF) is viable but only if you can get an op-amp with this extremely large open-loop gain (160 dB). Typically, you'd be lucky to find a suitable op-amp that is much more than 10 million and then you are constrained to using a bigger feedback capacitor like 200 nF or even higher.

Not the answer you're looking for? Browse other questions tagged amplifier accelerometer charge compensation offset or ask your own question.