I am trying to initiate a MM2S stream read from the programmable logic of a Zynq board. I have inserted the AXI DMA IP, and intend to use the AXI-Lite interface on it to program the registers in the Programming Sequence from p70 of the user manual

However, Vivado seems to be automatically connecting the AXI-Lite interface on the DMA to the ps7_0_axi_periph (AXI Interconnect), as shown in the read-only automically generated verilog file below. It remains this way even after I reset the output products with the connection absent in the block design.

Basically I just want to use the AXI-Lite interface from inside the sandbox with my own signals to write to the registers that would be required to read data into the sandbox, but Vivado is not letting me disconnect the AXI interconnect from the DMA.

Turns out a had a misconception. The AXI DMA Master looks like it is automatically an ARM/CPU master, and Vivado doesn't let me change it (see image). How can I connect a PL-based master to the DMA IP to read data into BRAM? 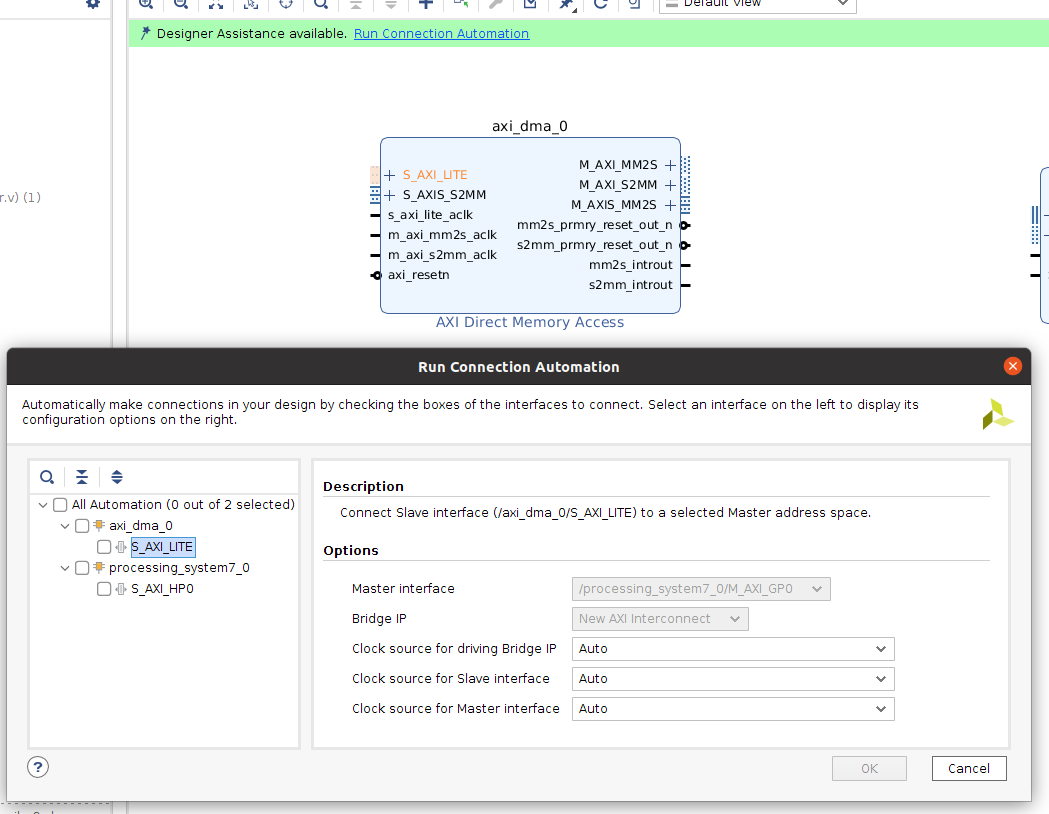 After speaking with an AE, I learned some useful information. The standard way of controlling the AXI-Lite interface on the DMA IP is via the CPU's master interface. It is possible however to use a different (even custom) master interface in the programmable logic, in which case the "Master Interface: /processing_system7_0/M_AXI_GP0" field in the Run Connection Automation window would not be 'greyed out'.

To create an IP that Vivado will be able to automatically associate with this interface (such that I can choose it from the drop down field and control the DMA with it), you need to go to Tools > Create and Package New IP > Create a new AXI4 Peripheral.

1
MM2S simple transfer gone wrong
2
Zedboard 512x512 matrices, % utilization problem
0
Xilinx ap_axiu parameters
4
Axi DMA correct parameters
4
How do you design a bare-metal Zynq PS-PL system with an accelerator/coprocessor in the PL?
1
Using Memory values in Verilog / VHDL
1
How does the AXI-Interconnect know where to route the data?
0
AXI Stream write and read not synchronized
0
DMA from IP catalog(VIVADO) in my design