How do people estimate node voltage and branch current by observing a circuit?

The question might sound silly, but I hope experts can guide me on that particular issue. I am struggling for the last few months. I am a beginner in analog circuit design. When I follow a tutorial, I found that by observing a big transistor (MOS)-level circuit, they can say about node voltages, branch current, input and output resistance, and sometimes gain. My question is, without drawing a small-signal model of those circuits, how do people do that? Is this because they already solved many circuits by hand (I mean not using any simulator), and that is why a concept was built? Even when I try to draw a small-signal model for a big circuit I get lost due to the circuit's complexity. What is a good way to approach this kind of circuit?

I added the figure as an example circuit!

Thanks for your time! 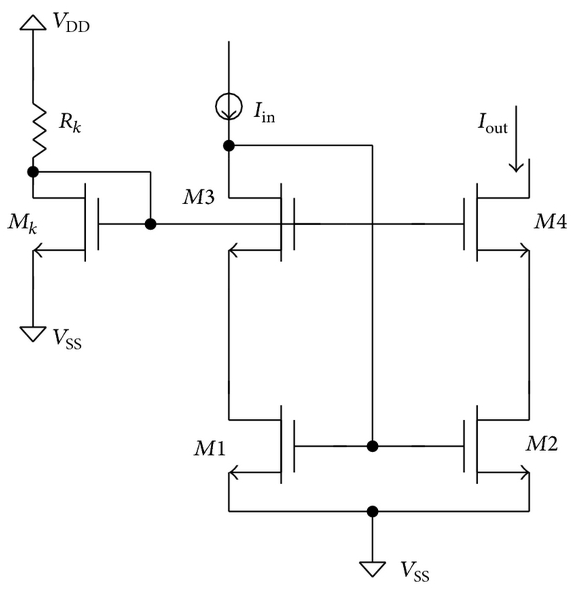 A lot of it is simply seeing/solving circuits and subcircuits often, and being able to pull out those structures and consider their behavior in isolation. Even complex circuits tend to often decompose to a number of simpler elements, allowing a lot of behavior to be qualitatively described quickly, saving mathematical analysis for unfamiliar or unusual sub-structures.

As an example for this circuit, one path of analysis that comes to mind is to:

At each step, I redraw the circuit (mentally or otherwise) and continue making simplifications/equivalences that seem to simplify it further.

Knowing the circuit's rough structure and behavior allows me to decide what stimuli make sense for it--it can now be simulated to supplement and verify the analysis. If I get unexpected results, I revise my analysis, simulate again, and so on until my understanding and expected/actual results converge.

Not the answer you're looking for? Browse other questions tagged mosfet analog circuit-design or ask your own question.

2
Estimate current through inductor in DC circuit with PWM control
2
Measuring continuous voltage and current circuit
0
Why do we use a current source to relax tradeoff between voltage gain and voltage headroom?
1
Relationship between Electrostatic Force and Circuit Layout / Dimensions
0
High power voltage controlled bidirectional current source circuit
0
Switch off branch of a circuit when voltage is present in another branch [power path management]
0
How to amplify current and buffer voltage
0
How to calculate current in a symmetric circuit diagram
0
How to calculate voltage and current of this circuit?
0
How input resistance related to better amplification in transistor circuit