I'm designing an audio amplifier input stage. This amplifier is fully differential. Among other things, one of the design goals is to have good CMRR for UNbalanced (single ended) inputs with RCA to XLR cables (pins 1 and 3 tied to GND at RCA connector).

I mostly succeeded in this goal, except for the high end of the audio spectrum. At 20kHz, the CMRR with unbalanced input drops around 30dB from CMRR at 20Hz. This is in case of a source output impedance of 600 ohm, unbalanced with the low impedance ground of the single ended output.

The cause of the declining CMRR at higher frequencies, is in fact the RF input filters of the amp. It consists of a 100 ohm - 100pF RC networks very close to the input connector, preventing RF signals reaching any electronics where they might be demodulated into audible signals. These 2 RC networks are implemented on pins 2 (hot) and 3 (cold).

If it would be possible to have a selectable impedance at pin 3 (cold input) that could be matched with pin2 output impedance at the source, the CMRR would be much better at higher frequencies. This would mean 3 or 4 settings, preferably freely combined. A similar system is often found in phono preamps, where input loading resistors and capacitors can be combined with dip-switches.

The trouble is, that it must happen in the RF input network, where GHz signals should successfully drain to chassis instead of entering the signal chain. I have no clue if or how this could be implemented without compromising RF draining performance.

The schematic is simple enough as it's a separate passive input connector PCB. The added switches are imaginary for now as I have my doubts they can be layed out in a way that does not compromise RF performance. 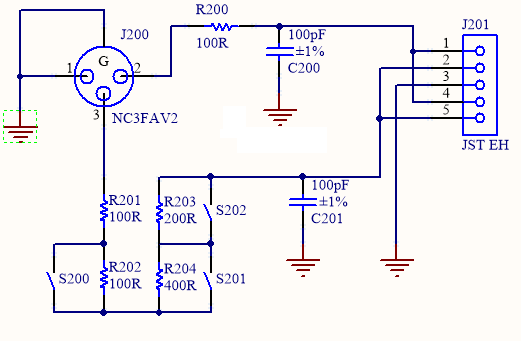 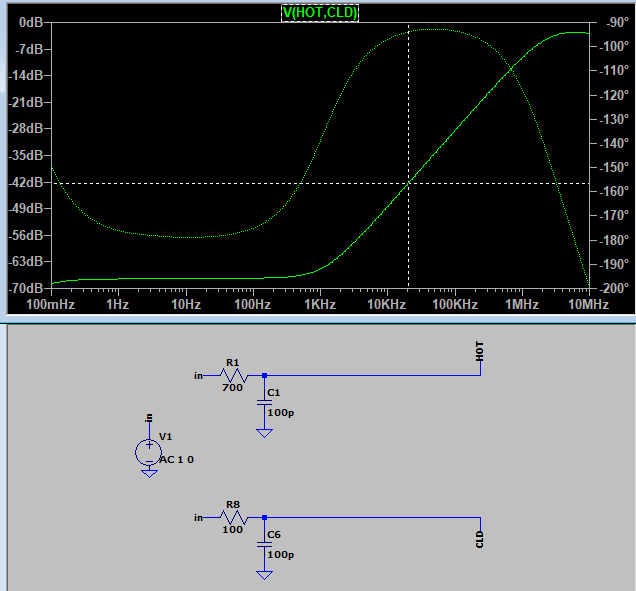 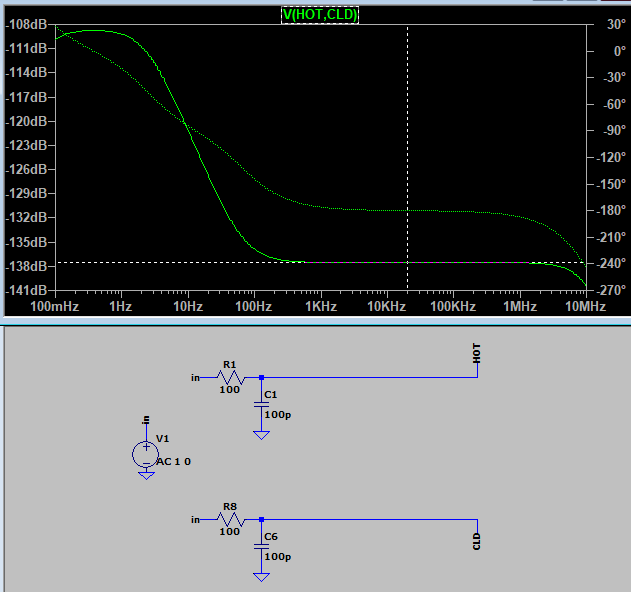 Now these are theoretical results and component tolerances significantly reduce CMRR performance, but the large differences between balanced and unbalanced input signal remains.

Edit2: reactions to answers and comments

It has been suggested that RCA to XLR cables are nonsense and should be avoided because they have no added value. Well, I disagree. Consider this type of connection between an unbalanced source and a balanced sink:

In this scenario, the balanced cable can cleary do it's work with regard to noise rejection. Even with the high frequencies compromised, at low frequencies it's still effective and performing better than an unbalanced input. Furthermore, an unbalanced input allows noise currents on to the active PCB's where they can cause havoc with all single ended circuitry. So, IMHO balanced inputs are always better performing, regardless the source that is connected to it.

Another suggestion was capacitive shunting of the differential input (behind the RF RC filter). A typical value would be 1nF. I had thought of this myself and it does indeed work in order to improve high frequency performance of CMRR. But it only works to prevent positive gains above 1Mhz, it does not change anything at 20kHz. Furthermore, this works equally well if implemented in the gain stage further down the chain.

The "BNC to XLR cables" are basically nonsense. You can't do that. You need to use an audio balun. If the user has unbalanced source and doesn't want to use a balun, then they need to run this unbalanced signal all the way to the chassis, and you need to have both a balanced XLR input and an unbalanced RCA jack, and you can select between those. The problem with "BNC to XLR cables" is that they have no place in any system that is meant to perform well, and it's not your job to accommodate people who purposefully degrade their signals.

Not the answer you're looking for? Browse other questions tagged rf audio input-impedance or ask your own question.

1
Does any RCA connector work for S/PDIF interface?
1
Boosting a microphone for a noisy, low sensitivity input?
0
How does noise affect an unbalanced signal on a balanced cable?
1
How to properly convert a balanced (line level) audio signal to unbalanced?
0
balanced to unbalanced audio switch
2
High-Z input in audio interface
0
How should microphone impedance relate to input impedance?
0
Balanced Audio Line Driver Off Single Supply