Is there such a thing as a 'Constant Power Source'?

Academic question: Is there such a thing as an electrical constant power source, which delivers energy at a fixed rate?

Specifically ... there are voltage sources and current sources, which maintain (an approximation to) a reliable fixed voltage/current respectively. A current source will deliver electric charge at a fixed rate, charging a capacitor's voltage linearly; a voltage source will deliver magnetic flux at a fixed rate, 'charging' an inductor's current linearly.

I'm trying to figure out if there is a supply that could deliver energy at a fixed rate - a power source - so its voltage changes to whatever is necessary to deliver a current such that \$VI\$ is a fixed amount.

Guessing at its properties...

For extra points: any other interesting properties? Are they actually a thing? What would they look like?

It's pretty simple to do with circuitry. The below circuit provides constant power at the output provided OA1 does not saturate, which limits it to something like 15A.

In reality the VCCS would also have limited voltage output compliance, which would show up in an inductor circuit. 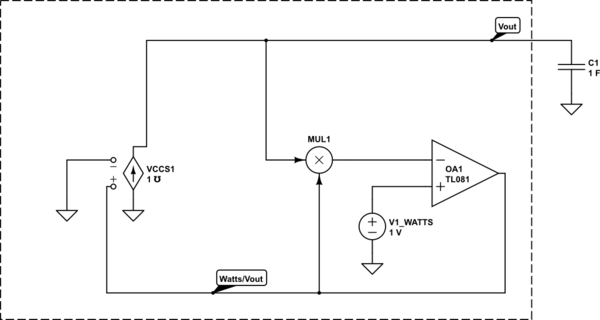 Here is what it looks like charging a 1F capacitor with 1W: 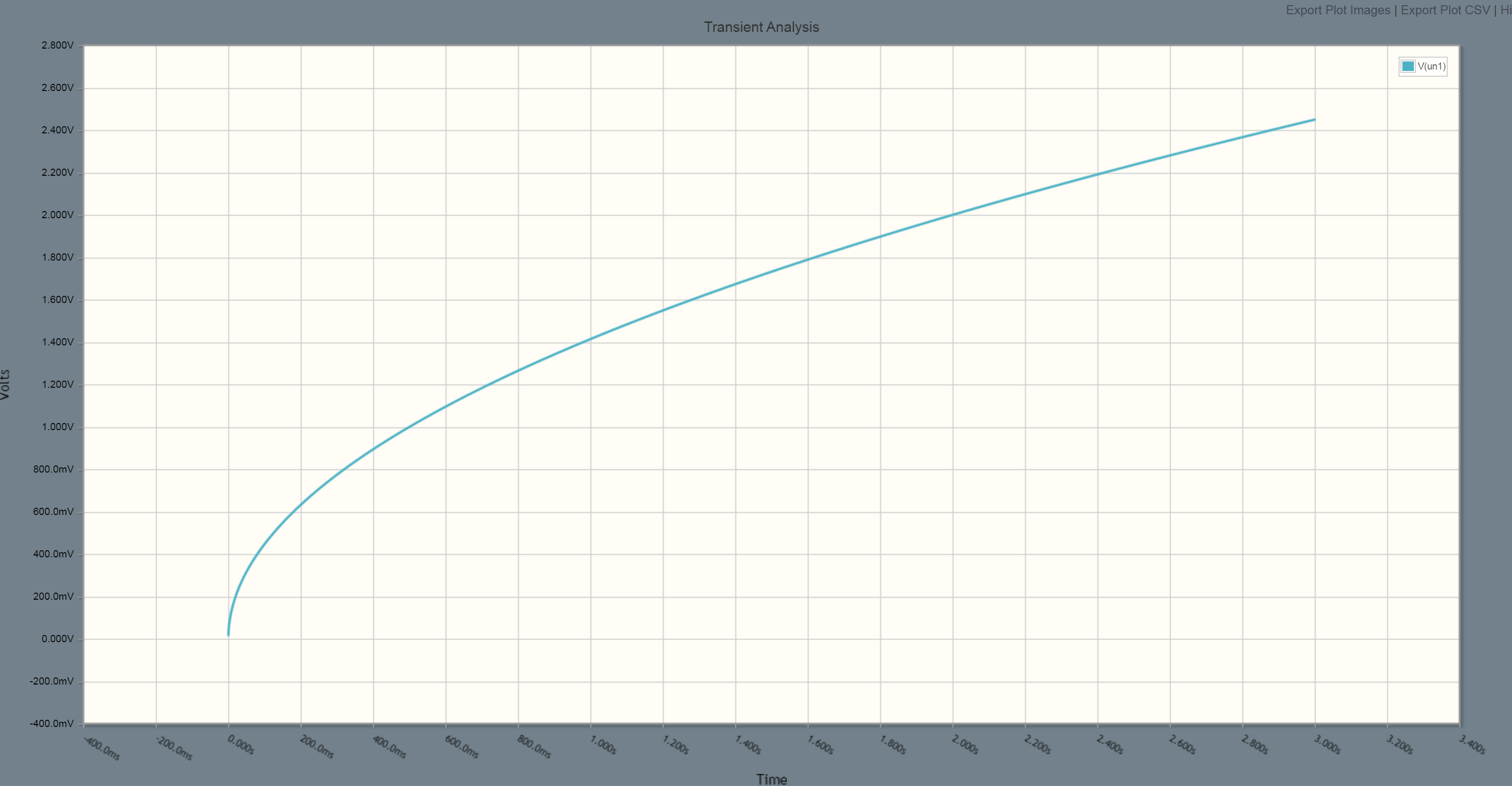 P.S. I used an op-amp with a multiplier because CircuitLab does not have a divider function.

Academic question: Is there such a thing as an electrical constant power source, which delivers energy at a fixed rate?

Each time the MOSFET turns on, current ramps up in the inductor and, after a certain length of time, the energy acquired by the inductor is a specific and known value.

When the MOSFET deactivates, that inductor energy is released into the load. If this is done at a constant rate, then a fixed energy value is transferred to the load so-many times per second. That's the same as delivering a fixed output power.

It's probably less easy to see but, a flyback converter does this with a slightly higher level of "perfection" compared to the boost converter above. The boost converter will always deliver a certain residual energy to the load even when the MOSFET is never activated. However, the flyback's output doesn't piggy-back on the input voltage hence, it is a "more ideal" form of power or energy delivery system: -

In the picture above, the flyback converter is also shown to be equivalent to the inverting buck-boost converter. They both deliver a constant power to the output and, that constant power is dependent on duty cycle and input voltage.

The voltage transfer function of an ideal DCM flyback converter with turns ratio 1:1 is this: -

And, if you rearrange it you find this: -

Hence, the power out is proportional to duty cycle squared and input voltage squared. Of course, if \$R_L\$ rises too high, the output voltage of a practical design reaches a value where the output capacitor breaks down but, within practical limits, the flyback converter operated at a fixed duty cycle and fixed input voltage, is a constant power output device.

I had considered the problem some years ago when asked about controlling some flexible PCB-style heater elements. The element plating thickness varied enough to be a problem with impulse power regulation and so constant voltage or constant current power supplies were not suitable.

I never built a solution but figured that it could be done using, for example, a controllable voltage source with the feedback coming from the product of the output voltage and current rather than the usual voltage-only feedback. I had considered using an analogue multiplier for the task.

This solution would be designed to work over a range of voltages and currents and so could only maintain constant power over a certain load range.

You can already see the challenges with defining a universal constant power source which delivers constant power into any load, such a device does not exist in a universal sense because power is dissipated by the load and not the source and so this behavior is load dependent and not source dependent.

. For a specific set of conditions or loads one can define such a device. For example a thermal controller may be designed to provide (approximately) constant power to a resistive thermal element by implementing load sensing and a voltage dependent current source which models the behavior of the element. In other words the source is designed for the load and a constant power application.

It is easier to define a power supply which consumes a constant amount of energy , which can be implemented with a ballast or energy dump that can accept the energy difference when the load does not accept it.

Constant power supplies exist to the extent that they are needed. Nearly all grid connected supplies adjust their output voltage and current to supply a pre-arranged power level. However the range of voltage adjustment necessary is very narrow. Such supplies are said to be grid-following. Battery charge controllers also deliver a relatively constant power level at a voltage that rises somewhat as the battery charges.

I'm trying to figure out if there is a supply that could deliver energy at a fixed rate - a power source - so its voltage changes to whatever is necessary to deliver a current such that VI is a fixed amount.

Well - there may not be in the sense of anyone having already built it, but you can certainly make one. In practical terms, multiply the voltage V_I from the current monitor by the output voltage, and use the product to regulate the voltage. How would you do the multiplication with a reasonable precision? Either by putting an MCU into the control loop, or by using a discrete time technique.

The LTC1043 switched capacitor building block has an example of a 0.01% accurate multiplier. That multiplier is fairly slow, though - the Y input is filtered through a 21Hz low-pass. But there are ways of speeding that idea up. The Y input stage is a voltage-to-frequency converter, and the X stage the multiplier. If one, instead, makes the Y stage a voltage-to-duty-cycle converter, e.g. using the LTC6992-2 voltage-controlled pulse width modulator running at 1MHz. This can be used to run a fast analog switch acting as a chopper that will multiply the X with variable duty cycle, performing the multiplication. This circuit will has Y bandwidth of about 100kHz for 1MHz PWM clock, and the controller using the multiplier output must have its bandwidth reduced to a smaller value to remain stable. Non-resistive loads may require lead/lag compensation.

Nothing can put constant power into a short or into an open circuit.

EG I can buy this LM2596-based module for about two dollars, one of the trimmers sets an input current limit (effectively a power limit if the input voltage is constant). the other two set output current and output voltage limits. 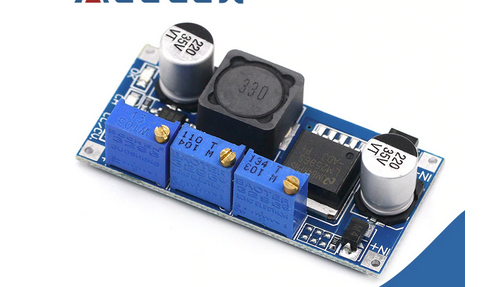 Not the answer you're looking for? Browse other questions tagged power current-source energy or ask your own question.

8
Why does short distance wireless energy transfer have such low efficiency?
3
How does a real current source change its pd to keep constant current
5
Current source as load in a differential amplifier
1
Energy efficiency of Li-Ion Battery
0
Measuring Li-Ion Battery voltage during charging/discharging
3
energy density comparison between inductors and capacitors
1
If energy is drained from a capacitor linearly, does capacitor voltage decrease linearly as well?
2
Discharging all energy of one battery into another