I am a beginner in electrical engineering, and to begin learning I decided to look into audio amplifiers.

I have seen that the power of audio amplifiers is often described in the units of watts, watts RMS, and watts PMPO.
So far, the only one of those units that I think I understand is watts.

For instance, I just recently made my own audio amplifier circuit. If I think: "What is the power of my amplifier supposed to be?", then my thought process goes like this:

The transistors I used are the TIP120, which have a maximum rated power of 65W. Then, I decide that 60W is a safer maximum which would be reached if my amplifier runs 19V through one of my 6Ω speakers.
Therefore, the power of my amplifier is 2x60W.

Then, I look at the datasheets of audio amplifier ICs, like the TPA3116 that says: "50W into a 4Ω load at 21V", which makes me conclude that in that setting it'll output 14V maximum into the speaker, which I think makes sense.
But then, I look at the datasheet of the TDA7294, and they talk about "RMS Power" and "RMS Music Power", units which I couldn't find clear information about.

Then, I look at home audio systems, like a Panasonic Stereo System I have which has "9500 Watts P.M.P.O." written on the front.
9500W? That sounds stupidly high to me, but then I look again and it has 300W written on the back of it.
If I'm correct, maybe a 1kW home stereo system could make sense, but a 2kW or greater one would not exist.

Audio has tons of "specifications" which really are marketing bullshit.

To specify the output power of an amp is more subtle than it looks.

RMS volts (or amps) have a specific, well defined physical meaning: no matter the signal shape, if you know the RMS value you can calculate power into a resistive load by a simple \$ V^2/R \$. So you can run a heater on 230VDC or 230VAC RMS, you'll get exactly the same power. Note the RMS value of a DC voltage is the DC voltage.

But "RMS power" is misleading. It does not mean \$ \sqrt{ \int p^2 dt } \$ (with p as power). Calculating the RMS value of power would give a number, but it wouldn't mean anything useful. What "RMS power" usually means in audio jargon is "Average apparent power delivered to load of specified impedance over a specific time without overheating." But there is no agreed upon standard about load impedance, duration of test, etc.

Still, "RMS power" is useful. Say an amp has a peak output power of 100W into 8 ohms resistive load, this means its maximum "RMS" power would be 50W. But if the spec sheet says 25W instead, then you know it will deliver a burst of peak power, but not for very long. Maybe the power supply caps or the transformer or the heat sinks were "cost-optimized", and it can output 50W "RMS" for 100ms but not for a minute.

Because transformers, heat sinks, big caps, and chunky power transistors cost money, and money is expensive, you get "music power" which basically means "hey if you want 100W we will deliver that for 1 second but the power supply will give up soon and if you insist the amp will overheat but we can print a nice number on the brochure".

This is basically marketing bullshit. Take everything that looks like a watt inside the device, add it all up, round up an order of magnitude or two, and you got a number. An intern from marketing will add a zero or two. Basically, any mention of "PMPO" on the box means it contains garbage and the specs are so ridiculous they have to wing it in order to sell it. Engineering-wise, it is about as useful as saying a Tesla can reach Mach 2 if you shoot it into space with a rocket and watch it do atmospheric reentry.

"What is the power of my amplifier supposed to be?"

In a resistive load, that's simple. Maximum current comes at max output voltage, so when you know how much voltage the output transistors drop at max current then you get the peak output voltage and you get output power from that.

With a real loudspeaker, that's a rather complicated question because the impedance curve is wiggly: a "8 ohms" speaker will go from 6 to 16-20 ohms over the frequency range. So for a known output voltage, current and power will depend on speaker impedance and thus on frequency. Besides, these are reactive loads, so current is out of phase with voltage. Resistive loads are easy because as output voltage and current increase, voltage drop over the power transistor decreases. Thus maximum dissipation in the output transistors is easy to calculate, and max current occurs at minimum voltage drop across the transistor.

But when current is out of phase with voltage, output transistor instantaneous dissipation can be much higher. For example if current lags voltage by 90° then a transistor can have the full supply voltage and max output current at the same time, which is much worse. This means Safe Operating Area is an important thing to consider (look at your transistor datasheets).

If you want to design an amp, the first thing to do is to stick a 0.1R resistor in series with your speaker, and measure current and voltage with a scope while playing music at your favorite levels. Then calculate average and peak power from the scope measurements. Most likely, if your speakers are reasonably efficient, you'll measure about 1W average and 10-50W peaks. Then you know it isn't necessary to have a kilowatt amp.

Curves on the left show collector current labeled Ic(Q2), voltage Vce(Q2), and instantaneous power Pd(Q2) in the upper power transistor with resistive load and inductive load. I set the inductance to a high enough value to add a substantial phase lag.

Ic(Q2) shows two different current curves with inductive load and without. Note the current peak is lower in this example with the inductor, due to extra impedance.

Plotting Ic and Vce on top of the datasheet SOA graph shows we're on the edge of what is allowed: 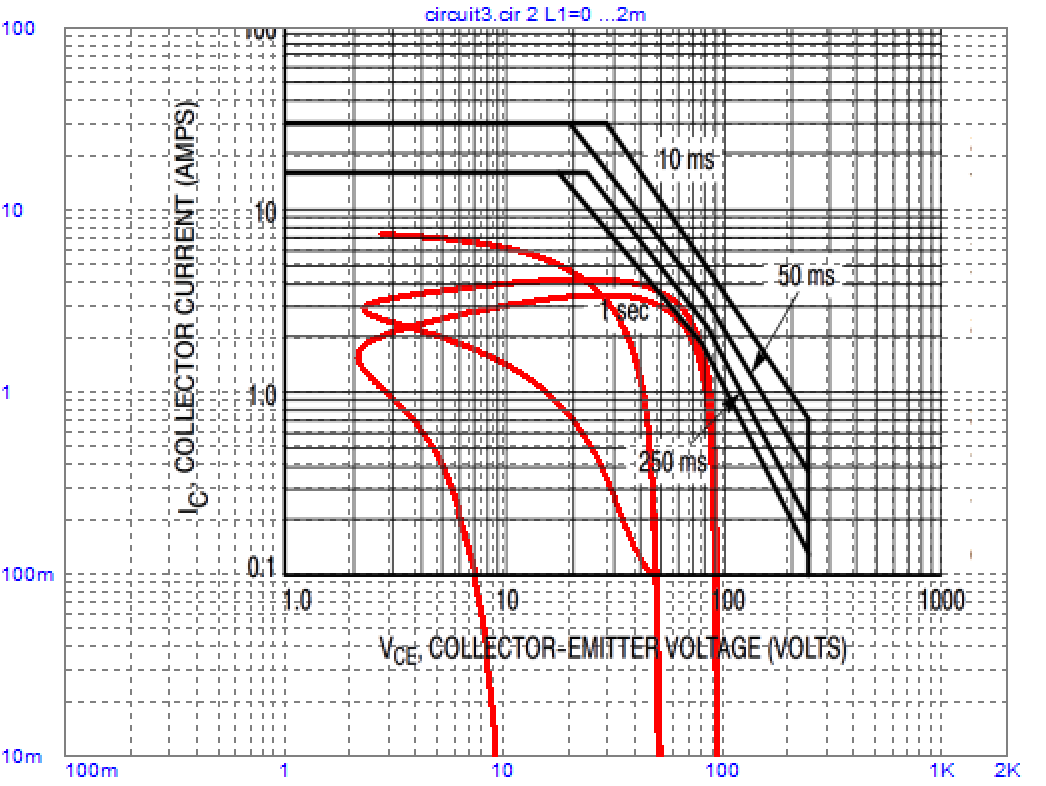 'Watts RMS' is the maximum continuous 'undistorted' output power delivered to the specified load when playing a sine wave. It is called 'RMS' to distinguish it from non-sine, peak, or instantaneous power. You may think this is the only proper way to specify audio amplifier power output, but it's not - for several reasons:-

'Music power' and 'PMPO' are attempts to produce a figure that more closely represents the perceived power output when playing music.

'RMS Music power' refers to the sine wave power that can be delivered for a short time before the power supply voltage sags or components overheat. In many designs this is more relevant than continuous power output.

PMPO (Peak Music Power Output) is based on the theory that short peaks in the signal may reach instantaneous power levels many times higher than the typical continuous output. Since the amp and speakers have to handle this peak power without distortion, the theory is that it is a better measure of real-world performance. However this figure has been abused to the point of being meaningless marketing speak. How they calculate it is anybody's guess.

Are my conclusions about my audio amplifier circuit and the TPA3116 correct?

When the TPA3116 datasheet says: "50W into a 4Ω load at 21V" it probably means that is the maximum continuous sinewave power output into a 4 Ω resistive load with the specified voltage and adequate cooling. The peak-to-peak voltage required to do this is 40 V, which it achieves using a 'bridge' output that puts out up to +-21 V across the speaker.

Your design would be able to put +-19 V peak across 6 Ω for 30 W sine wave 'RMS power' - except that your op amps and Darlington transistors have a voltage loss of ~2.7 V per side, so the actual peak speaker voltage is probably only about +-16.3 V and actual power output is ~22 W. That may seem like a huge loss, but it is only 1.35 dB less which is barely noticeable.