How is it that the induced EMF in an alternator is in quadrature with the main flux?

Looking at the simplified diagram of an alternator, the flux "linked" with the conductor is maximum at 90, 270 degrees, is also when induced EMF is maximum. So isn't the main flux in phase with the induced EMF, or are my assumptions flawed?

It's quite simple when you think about the spinning coil: - 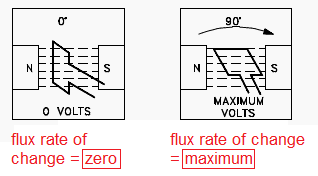 Not the answer you're looking for? Browse other questions tagged ac generator alternator emf or ask your own question.

0
Is the Induced EMF additive to the circuit?
2
Moving the magnetic field around a fixed conductor?
0
How EMF is generated in a generator
0
What happens in a generator so that we get a sinusoidal voltage as an output?
0
Induced EMF in electrical machines
0
How to calculate the emf with flux density given instead of flux
0
Magnetic field saturation in ac circuit
2
Waveform of induced EMF in a basic AC generator