Derivation of formula for temperature coefficient of resistance

Referring to this article, I'd like to compile two key formulas for the temperature coefficient of resistance.

First is the formula at zero temperature. 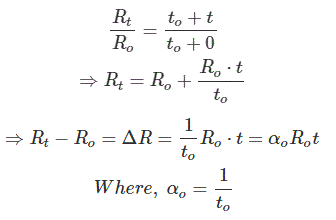 Next is the formula at a specific temperature.

I'd like to know, is there a derivation for these formulas? I mean, I totally get how you could define the first formula to just be a reciprocal of that quantity. But with the second, I don't get the intuition behind just adding in the denominator. I mean, it doesn't have to be a derivation but at least some intuition on why it is like that so it would help me remember it other than just straight up memorizing.

Not the answer you're looking for? Browse other questions tagged dc resistance temperature conductors temperature-coefficient or ask your own question.