How do I analyze this negative feedback?

I'm working on understanding the four negative feedback topologies. My process has been to first analyze the circuit's dc and ac characteristics for quiescent current, gain, impedance, etc. Then, I like to compare the circuit to the common "block diagrams" that show the internal amplifier and the feedback network. It was very helpful to me to be able to see that (for instance) the emitter resistor provides the feedback for the common collector and common emitter. One such example is here.

I'm struggling with the following circuit. 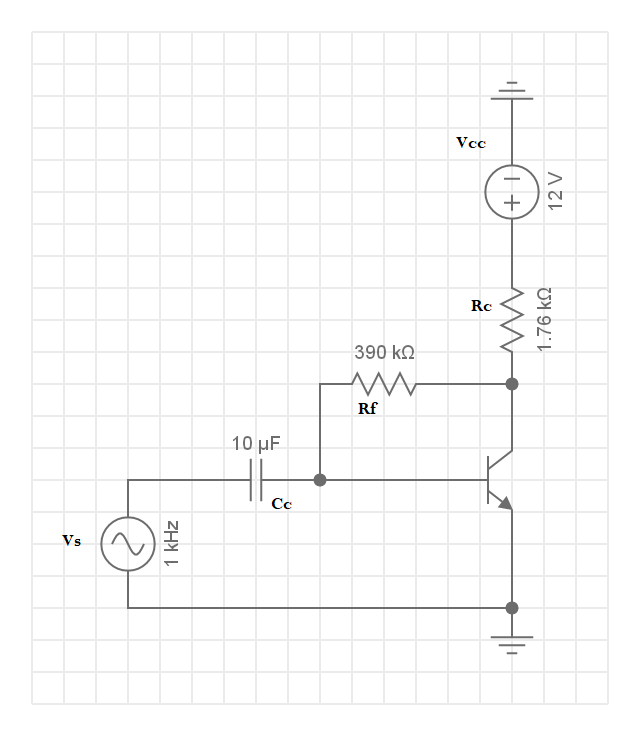 I know a little about it already, but just enough to confuse me. I know that I must use a current source for the input signal, as the feedback provides a current. I know that the internal amplifier will see a current and provide an amplified voltage, so that makes this a transimpedance amplifier.

But here's what I can't figure out. For the transconductance and voltage amplifier topologies, I was able to remove \$R_E\$ in order to view the circuit without feedback for comparison. With that I was able to verify that the gain of the internal amplifier and the feedback network proved out. But in this circuit, I can't seem to figure out how to remove the feedback.

How do I analyze the circuit to get values for the gain of the internal amplifier without feedback (open-loop) in ohms and the feedback factor, \$K\$ in seimens?

Here is the block diagram I am referring to (top-right picture). 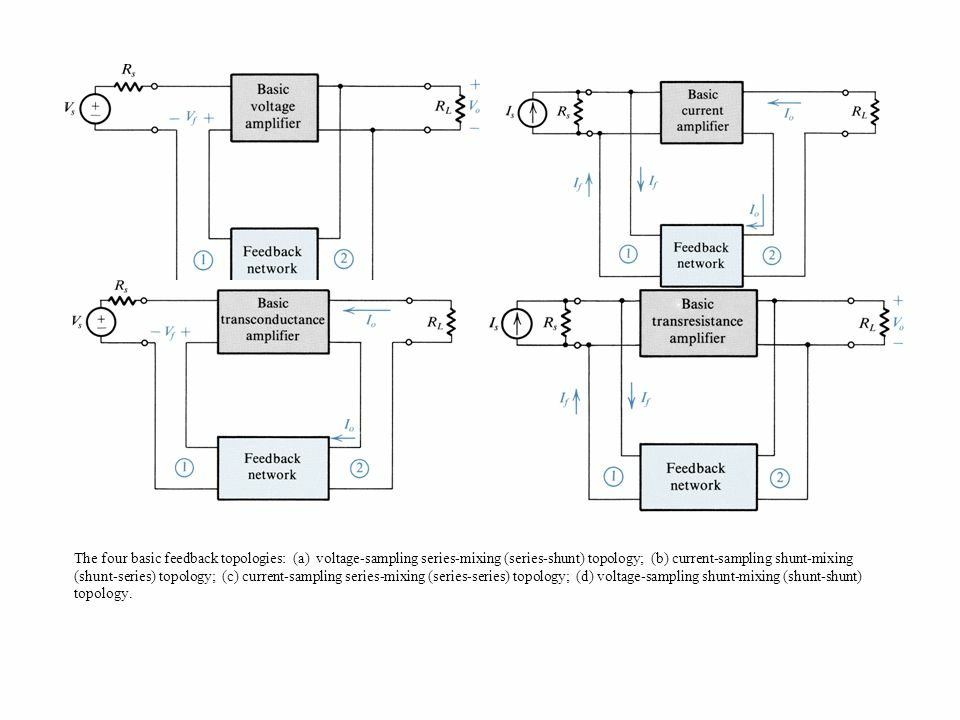 is derived from block diagrams, and block diagrams have the peculiarity of unilaterally transferring signals. Block diagrams do not model load effects or the inherent bidirectionality of power transfer enacted by two-ports. And two-ports - which relate pairs of variables (voltage, current) at the input and output are what we naturally use to solve circuits. When we solve a feedback circuit using two-ports we implicitly take into account bidirectionality and loading effects and that might introduce spurious terms in the feedback relation.

Since this feedback configuration samples the output voltage and compares the input current, it is best explained by using an input current generator (as you ask in the comments above). So, here is your circuit with an input current source 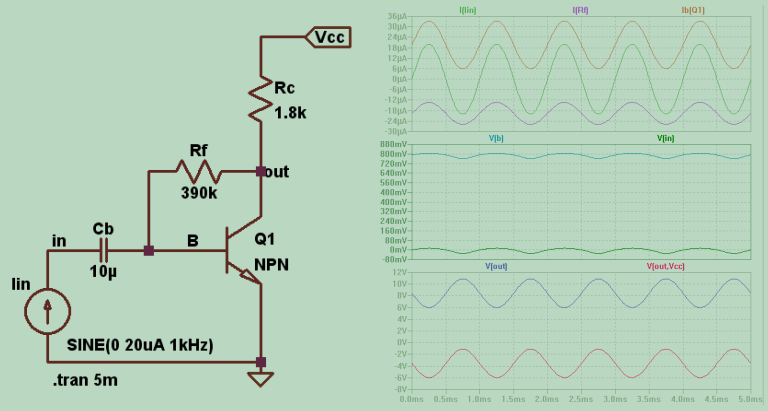 Once we have solved biasing and found the values of the small signal parameters, we can solve it with a reasonably detailed model for the BJT (I assume that the input capacitor is there for decoupling purposes, and since it is in series with an ideal current source I will neglect it in the analysis - simulation with an ideal current source confirms it won't affect the output) 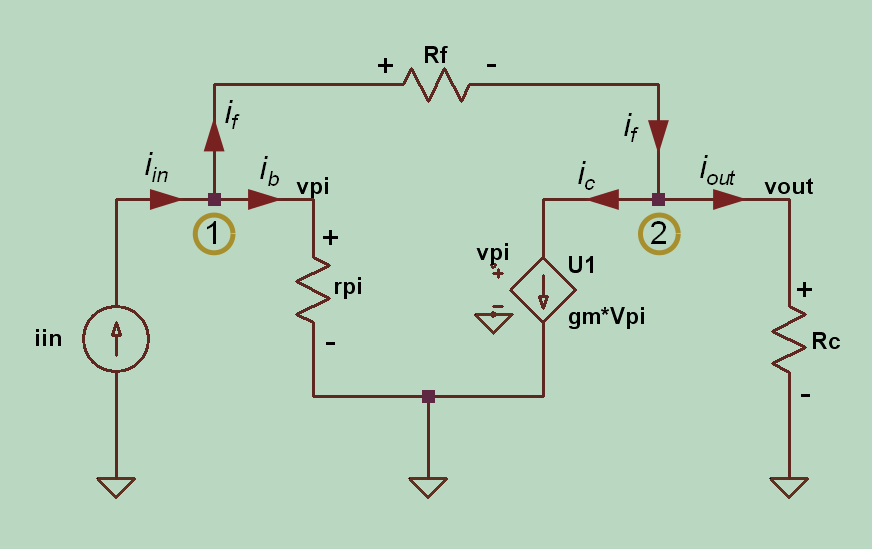 an expression that we can recast as

Note what happens if we remove the feedback by making \$R_f\$ go to infinity: \$R_c/R_f\$ goes to zero and \$r_\pi //R_f\$ becomes \$r_\pi\$, while in the denominator the whole middle term is turned into nothingness. Hence the open loop gain becomes

Now, let's get back to the complicated feedback relation we have found above and let's see what happens when we choose the feedback network in such a way that it is the least disturbing as possible (while still performing its function).
If \$R_f\$ is much bigger than \$R_c\$ we can neglect the \$R_c/R_f\$ term and approximate the parallel of \$r_\pi\$ and \$R_f\$ with just \$r_\pi\$. Being \$R_f\$ still finite, the middle term in the denominator won't go to zero, though. We get an approximate feedback relation that can be cast in the form we have derived with block diagrams:

Note that I could have spared a bit of algebraic mess, had I chosen to use a BJT model with current control (\$i_c = \beta i_b\$ would have avoided bringing \$v_\pi\$ and \$r_\pi\$ along), and chosen the opposite conventional sign for \$i_f\$ (in that case the block diagram would have has a + summing node and the ideal formula would have been

and we would have obtained a positive B.

Moreover, had I realized from the start that I wanted to avoid loading effects, I could have used a simplified and idealized version of the two port representing the amplifier stage with a zero input resistance (what we ideally want in an amplifier that accepts an input current) and a zero output resistance (what we really want in amplifier that produces a voltage output - note the by not including \$r_o\$ we already had that simplification). The analysis would give directly the simplified formula.

I don`t know if the following can answer your question:

All resistors affect the gain and missing is your source Rb resistor for feedback ratio. I prefer to pull down the base to bias the collector better as well as attenuate feedback.

The Rc collector affects the open loop gain ratio by current thru the emitter and Rbe. Since that gain is not enough , Rc affects the closed loop gain.

The negative feedback improves linearity greatly and the base pull down improves Vc stability to centre the swing since the base voltage is lower than the collector.

I would analyse the DC case first. Here's a simulation that helps you to understand that analysis: - 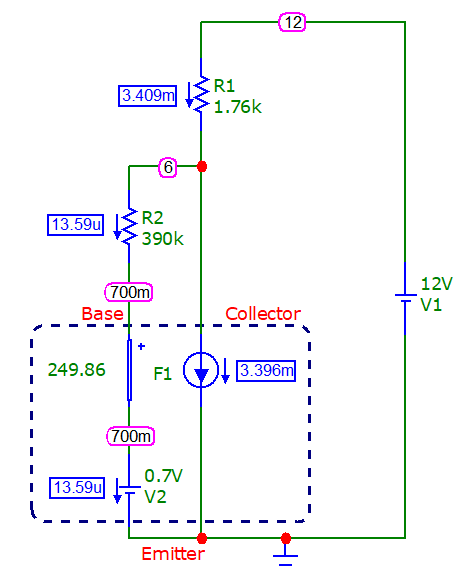 That's how I would analyse the DC and the simulation ties in nicely with it (as expected!). It yields a current gain of 249.86 that exactly produces mid-rail DC on the output (the collector).

For the AC analysis I would assume a virtual ground at the base i.e. the AC voltage seen at the base is virtually zero. We can then use the well-trusted op-amp formula for AC gain magnitude: -

And, if that was deemed too imprecise, I would dig into negative feedback theory to find the formula when the active device has finite voltage gain. Of course a BJT does have finite voltage gain because there is always an internal emitter resistor. The well-trodden formula for \$r_E\$ is this: -

But, it's all rather hypothetical because a real BJT has many more nuances about it that make a few scrawls on paper a bit pointless in reality. The answers/numbers above are basically approximations so please do remember that.

Not the answer you're looking for? Browse other questions tagged amplifier bjt negative-feedback or ask your own question.

3
Understanding the biasing of a transistor with negative feedback
2
What “was” input resistance of this voltage-voltage topology amplifier before feedback?