There are just 6 errors now

Can't trace errors in this VHDL 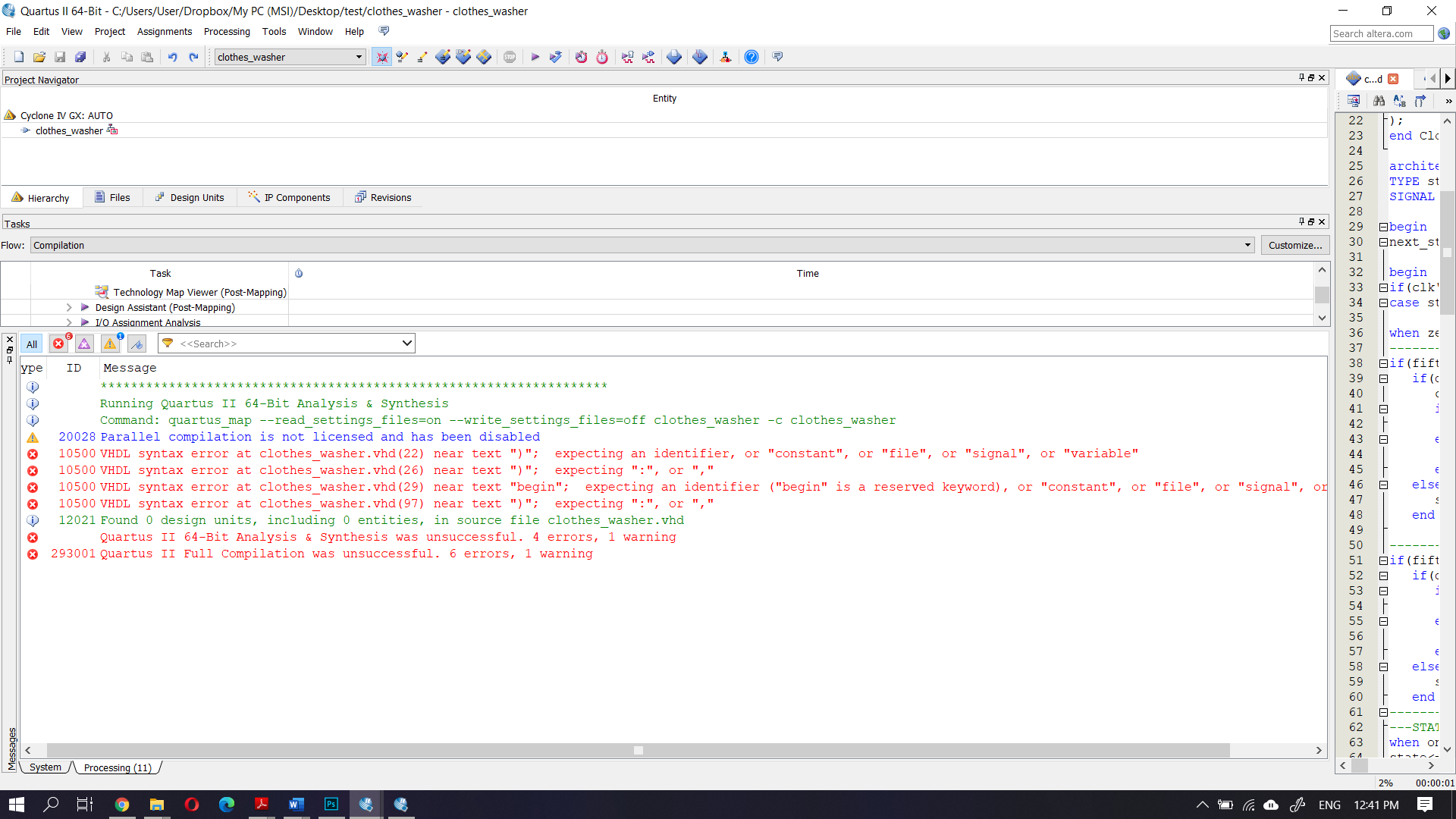 This is not specific to VHDL, but generally here's how to interpret compiler error messages:

The keyword "Error" means a serious problem that prevents the program from even being built. Other types of messages you could see are "Warning" (the design can be built, but something looks very wrong), and "Info" (just neutral information about the build).

"syntax error" means that there's something wrong with the way the source code is entered... semantics is meaning of language, and syntax is structure of language. A statement like "I have a red sofa" conveys incorrect information but still has valid syntax, but a statement like "Idnz wefk 33, !##sfo" doesn't even have understandable syntax. The compiler is complaining that it can't make any sense of what's at that point.

"clothes_washer.vhd(22)" identifies the offending source file and which line number the compiler had reached when it realized there was an error. The actual error could be on that line, or maybe on the line just before it. Line numbers are important for locating error reports, make sure you are using a text editor that displays line numbers and lets you go directly to a specific line number. Counting down 22 lines isn't so bad, but trying to locate an error on line 2374 is too many to count by hand.

So now with line numbers displayed, you can see that the actual problem was at the end of this entity declaration, near the closing ")".

This particular error message goes on to say: near text ")"; expecting an identifier, or "constant", or "file", or "signal", or "variable" -- as noted in a comment from user td127, VHDL compiler does not expect to see ";" at the end of the last port item. Since there was a semicolon, and semicolons only come between port items, it was expecting another port declaration, instead of the end of the list... What you have right now is similar to

which is wrong syntax, it should be

The exact punctuation is really important. The compiler cannot just figure out what you meant. If the punctuation isn't perfect, it will throw a syntax error.

There are several other places where you have the same mistake, check line 26, and line 97; and there's a different kind of mistake on line 29 near or just before the "begin". Are you sure that's the right place to declare type state_type? It looks like signal declarations are allowed between "architecture" and "begin" but I don't see evidence that type declarations are valid there. (I'm not a VHDL expert, I'm more used to Verilog, but just skimming a few quick reference guides, https://owd.tcnj.edu/~hernande/r/VHDL_QRC__01.pdf and http://atlas.physics.arizona.edu/~kjohns/downloads/vhdl/VHDL_Lang.pdf)

Bring up your favorite internet search engine and put the core of the error message into the search text: "VHDL syntax error near ")"" and you will find some useful information... sometimes there are many possible causes of an error message, so you may have to chase down several leads to find it...

Questions like "here's my code, plz help" are never well received... It's better if you can be more specific, like this:

I'm getting this error message:

VHDL syntax error at clothes_washer.vhd(29) near text "begin"; expecting an identifier ("begin" is a reserved keyword), or "constant", or "file", or "signal", or "variable"

This is the context:

And in fact, if you search for VHDL syntax error near text "begin"; expecting an identifier there are already a lot of similar questions posted, so it's worth looking at those before posting a new question.

Not the answer you're looking for? Browse other questions tagged vhdl debugging intel-fpga quartus or ask your own question.

1
Problem in synthesizing
2
Problem getting VHDL syntax correct
1
Copy data into read_device_file after EOF from input text [Xillybus - VHDL]
0
Vhdl Error (10500) near text "when"; expecting ";"
4
VHDL Component Instantiantion Failure, Entity or Architecture wrong?
1
Error in simulating bdf with Waveform.vwf.vht, but bdf compiles successfully
0
VHDL: case when using constants constructs
0
Why are VHDL "external names" that are used to create alias to signal at another level of hierarchy, not synthesizeable?
0
What does a syntax error mean when it says: "near text "else"; expecting "end", or "(" "?