Why is a power amplifier most efficient when operating close to saturation?

I have been seeking an answer for this question for some time, and i am clearly missing some intuition. I have numerous sources stating that the efficiency is higher when the amplifier is driven close to saturation, which obviously gives troubles in RF applications, when waveforms with a high PAPR is used.

However, there are no arguments stating why - can someone help me answer this?

But we also know that when the variable resistor is set to close to zero ohms, maximum power is transferred to the load resistor hence, efficiency of power transfer is also the greatest.

That would be because of power dissipation of a transistor is P=U*I. If it is fully off, I=0, and if it is fully on, U=0, so ideally the transistor dissipates no power. But it dissipates most power when it is halfway on, as there is both voltage over it, and current through it.

Class A will transfer max current and dissipate least power when the voltage drop is lowest.

This is why Class A is just about 50% efficient on average and Class D 98% or so.

For RF they might use Crest Factor Reduction (CFR) methods to improve efficiency by clipping, filter harmonics or other methods for ODFM.

The other answers are also correct but I missed the relation to how efficiency is defined, so here's my additional answer:

For most amplifiers, the total powerconsumption consists of two parts, a constant part (for biasing etc.) and a variable part which depends on how much power the amplifier is delivering:

If we then define the efficiency as the ratio between the delivered power and the total power consumption:

From (3) we can now see that the efficiency becomes higher as \$P_{out}\$ increases.

So for maximum efficiency, you need to make \$P_{out}\$ as large as possible.

The largest "usable" power output of an amplifier is just before the point where it starts to saturate. If you go any further (more power) then the amplifier distorts and it doesn't behave as a "proper" amplifier anymore.

For a small output power, efficiency will be low as the \$P_{constant}\$ part is more dominant. Then most of the power is consumed by the amplifier itself instead of appearing as "usable" power at the output.

Efficiency of class B amplifier. 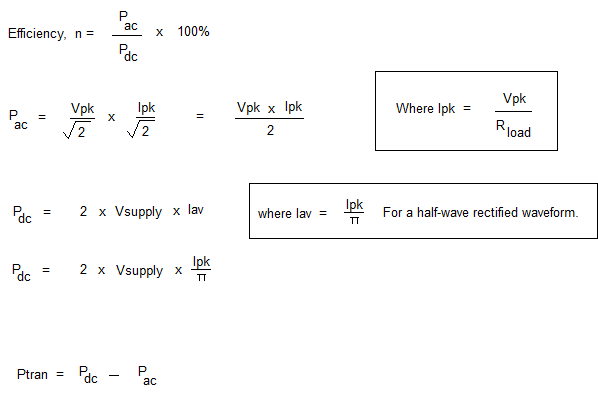 I’ve used the equations above to generate the values in the table below. I have assumed that the load is a 10 Ohm resistive load and that the supply rails are plus and minus 10V. 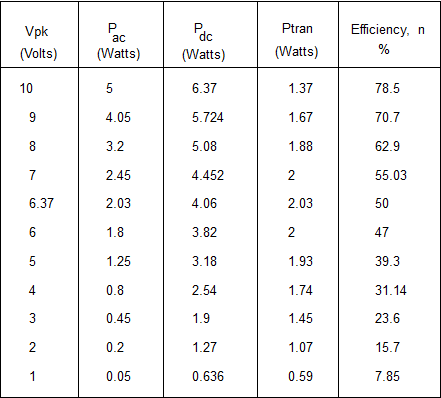 Looking at the data in the table above it can be seen that the maximum theoretical efficiency of 78.5% occurs when the voltage across the load is peaking at the supply rails. From here the efficiency reduces linearly as the peak load voltage reduces. The amplifier has a 50% efficiency when the peak load voltage has reduced from 10V to 6.37V when the power dissipated in the load is equal to the power dissipated in the transistors and the sum of the two is equal to the power being supplied by the power rails.

Not the answer you're looking for? Browse other questions tagged rf power-amplifier or ask your own question.