For a test on circuits that I just completed, a question asked about a voltage divider circuit (see below.)

However, we were told to assume that the load had no resistance and was parallel with the second resistor.

The question seems to imply that there would be a nonzero voltage VR, however, and it seems nonsensical if it is equal to zero, but shouldn't we be assuming that the load has infinite resistance so that we are investigating an ideal voltage divider? 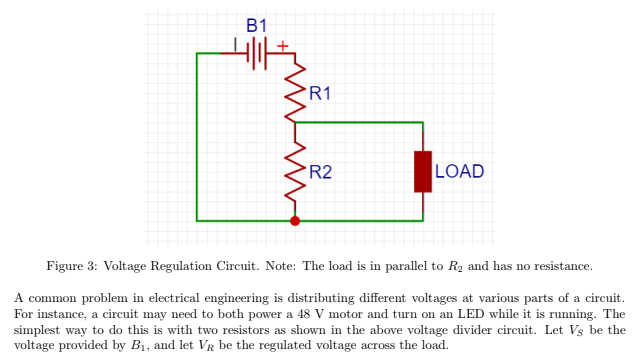 Infinite resistance means no current, which means it can be ignored. Its a really good trick for analyzing circuits because it can make estimation much faster (and also a trick for opamp circuits).

A good exercise is to find the voltage for the no load (ideal) condition, then do it with a small load.

What one will find is a load pull down the divider, so a resistor divider doesn't do well with a load if voltage maintenance is the goal

If not already, one of the things you should become very familiar with is idea of the Thevenin equivalent for the resistor divider case. It really helps in better understanding a case like this one. (By this, I mean understanding it despite poor wording, should that ever happen to you.)

Your schematic can be converted to this one:

Now you can easily imagine what happens throughout the range of \$0\:\Omega\le R_\text{LOAD}\le \infty\: \Omega\$. It will be easy to work out the current, etc.

Not the answer you're looking for? Browse other questions tagged voltage circuit-analysis resistance voltage-divider or ask your own question.