I have the following problem:
Consider two voltages described by

My Question is:
I understand that the angle will be 120º, but what will the voltage be?
Below is a drawing of how I am imagining it to be from a trigonometric point of view, but maybe this is the wrong way to look at the problem? 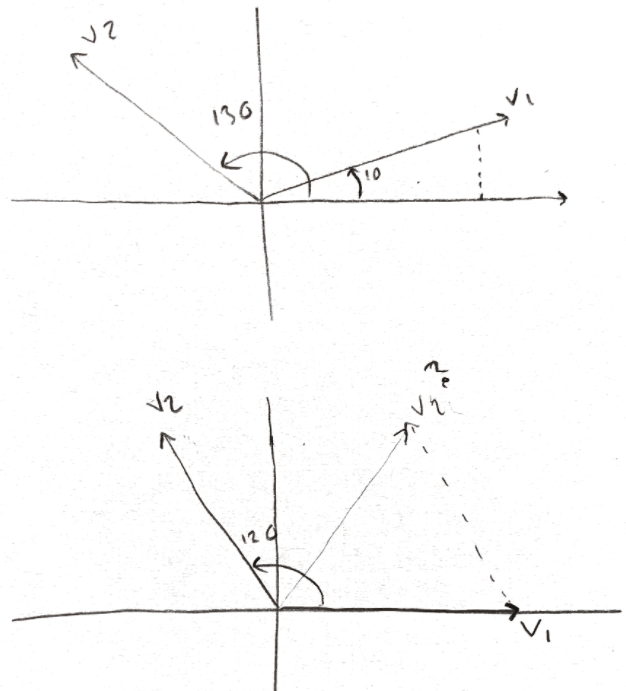 To find it without drawing phasors you just add/subtract \$\theta °\$ to/from all of your phasors where \$\theta °\$ is the angle that when added/subtracted from your reference phasor will make it \$0°\$. In your case you can subtract \$10°\$ from each phasor (thus making \$v_1\$ your reference).

What really matters with phasors is their position relative to each other. Rotating the whole group around does not change their relationship to each other. Further, you can use whatever angle you want as the reference. Some folks use \$90°\$ so it is whatever you prefer.

Not the answer you're looking for? Browse other questions tagged power-electronics electromagnetism or ask your own question.

0
Why do we need zero voltage reference circuit for micro-controller?
8
Circuit yields a peculiar contradiction between KCL, KVL and Faraday's law
0
Are there methods to get the modulo of a variable voltage, with reference to another (constant) voltage?
3
Cascade multiple Full-bridge Rectifiers Connected to Multiple AC Sources
0
How can a resonator do band-pass filtering?
0
What's the logic inside the formula for the calculation of the maximal envelope modulation amplitude of two temporal interfering electric fields?
0
How to calculate the angle for the phasor form?
1
How does this control loop work?