Any suggestions on how I can fix this?

The bulb didn't light up even for a fraction of a second.

It probably did illuminate but, it would have done so for a small fraction of a second. For a capacitor, we can say this: -

And, if we differentiate charge (Q), we get current and rate of change of voltage: -

So, if the LED is taking about 30 mA\$^{note1}\$, the rate at which the voltage collapses on the discharging capacitor is this: -

So, assuming the LED needs at least 2 volts to operate and, the capacitor is charged up initially to 6 volts, then the LED lights for about 13 ms (give or take a few milliseconds).

You could try making the 100 Ω resistor a lot bigger (say 1 kΩ) so that there will only be about 3 mA flowing (on average) into the LED and it should still light but, it will still only light for maybe 130 ms. Turn the lights down to see it.

\$^{note1}\$ - The resistor in series with the LED is 100 Ω hence the initial current surge will be 40 mA, but I have used 30 mA as an approximate to the average level over the short time the LED illuminates. We could argue this one way or the other but, at the end of the day, the illumination duration will still be in the region of 10 to 20 ms.

Why a 100μF capacitor, after being charged up to 6V, through a rectifier, by a repeatedly tapped piezo, cannot light up an LED?

To verify my guess that the capacitor has stored too little energy to light up the LED long enough for human to see, I did the following.

This is the YouTube showing the capacitor discharging to 1kΩ and LED.

Youtube Video of a 10,000uF capacitor discharging to a 1kΩ and LED

I found the testing of LED input voltage vs current and brightness a bit tedious, besides not very reliable. So I assembled a simple test rig for quick and dirty testing, as shown below. 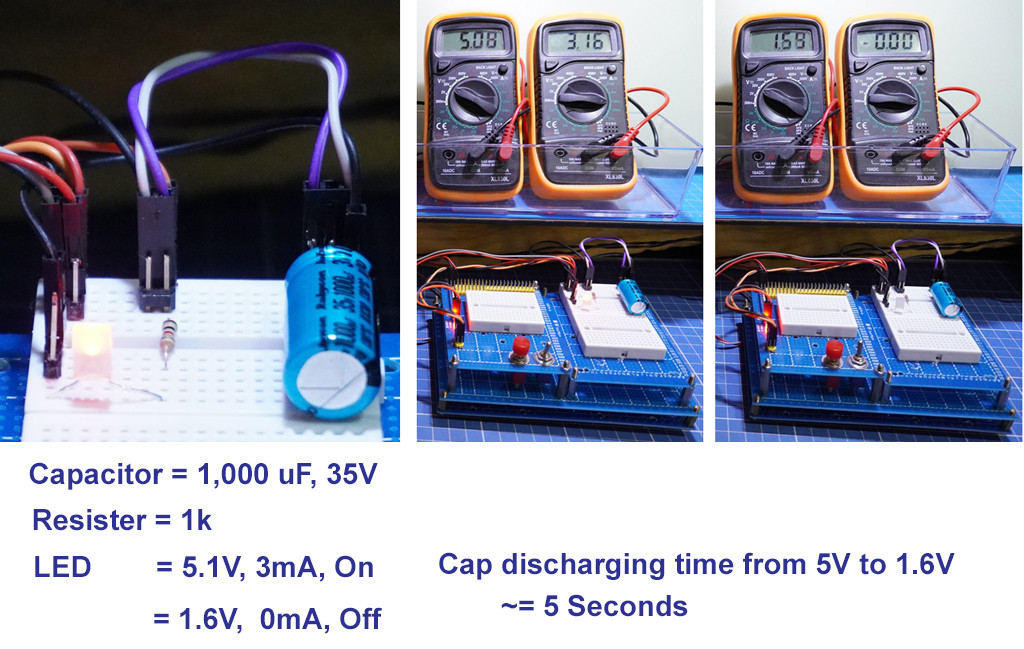 Now I can test one combination of capacitance, V, I, brightness in less than 2 minutes. A very rough summary is given below:

One very important conclusion I jumped to is the following. Since LED current varies drastically as even small change in voltage, it is difficult to control current and brightness (which is linear to current) by adjust voltage.

So now I appreciate very much why CCS (Constant Current Source) is used in almost all of non hobbyist application and projects. So I am stalling my testing at this point, because I am diverting to learning and playing with CCS stuff, and only come back after I have build up confidence in CCS skills.

The OP's questions is a bit complicated and needs a long answer.

(1) If you tap the piezo sensor repeatedly, the piezo becomes a charged capacitor.

(2) Now the charged up piezo with, say negative end, connected to a capacitor through a rectifier, which lets electrons pass through but not allow them go back.

(3) Now you use a multi-meter and finds the capacitor charged up to 6V.

(5) Now you connect the cap to a LED, which should grow red, if there is, say, current of 5mA, passing through it.

(6) Now the starting discharging current should be big, something like V/R, where V = 6V, and R the "initial" resistance of the LED.

(7) If the initial resistance R of the LED is too big, then the current passing through, by Ohme's Law, I = V/R might be smaller than 5mA, so the LED won't light up.

(8) And even the initial current is bigger than 5mA, the cap might run out of electrons pretty soon, perhaps in 10μs.

In other words, if the LED lights up for 10μS, human eyes won't notice the flick of light.

(8) There are a couple of workarounds: (a) use a tight string, say guitar string to hit the piezo, then you might see LED blinking, as the string repeatedly hits the piezo, charging and recharging the capacitor.

(9) Use a oscilloscope, to store the capacitor discharging waveform, and display it back in "slow motion".

Not the answer you're looking for? Browse other questions tagged led capacitor piezoelectricity piezoelectric-effect or ask your own question.