A mistake in "Op Amps for Everyone" about op amp attenuators

In Texas Instruments' book "Op Amps for Everyone" (5th edition, link, see page 347), in chapter 25 "Common Application Mistakes" I believe there is a mistake (ironically).

It states that it's wrong to use a unity-gain stable opamp for an attenuator like this:

I believe the statement is wrong, because that attenuator have the noise gain of \$1+\frac{R_F}{R_G}\$ which is always \$\ge 1\$. Opamp stability is determined by the noise gain (i.e. the gain with respect to the non-inverting input), not the gain of a desired signal (opamp doesn't know what the desired signal is). There is even a compensation technique which increases the noise gain preserving the signal gain (e.g. add a resistor between the opamp's inputs in fig. 25.1). Surprisingly, even in the same book in chapter 7, sect. 7.4, there is a highlighted statement, quoute:

Several things must be mentioned at this point in the analysis. First, the transfer functions for the noninverting and inverting equations, (7.13) and (7.18), are different. For a common set of \$Z_G\$ and \$Z_F\$ values, the magnitude and polarity of the gains are different. Second, the loop gain of both circuits, as given by Equations (7.15) and (7.19), is identical. Therefore the stability performance of both circuits is identical although their transfer equations are different. This makes the important point that stability is not dependent on the circuit inputs.

It means that an inverting amp (like in fig. 25.1) has the same stability as a non-inverting amp with the same resistors (as if \$V_{IN}\$ be grounded). 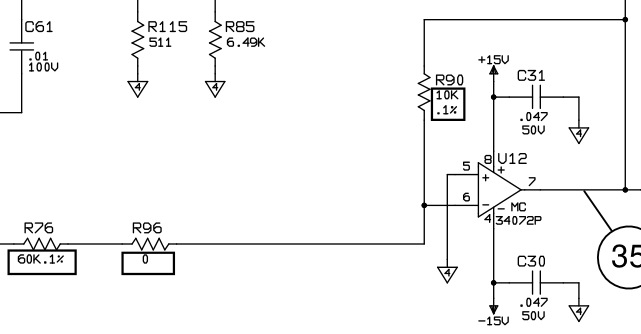 Does this a real mistake in the book (survived for the 5th edition!), or I miss something?

It's a mistake in the book.

At 3rd editions the editor of the book was changed to Bruce Carter, and "Texas Instruments" label from the title is gone. He placed that caution in many places around the book. He didn't remove the old material though, like the quote above about inverting and non-inverting circuits has the same loop gain (so the stability), which directly contradicts with the Carter's caution.

There are some other discussions on web, e.g. this with Ron Mancini itself, and this where Michael Steffes (from Texas Instruments) wrote:

This actually was a classic mistake by Bruce Carter that Mancini seems to paper over for some reason. Somewhere Bruce got the idea that an inverting configuration had a noise gain of Rf/Rg instead of the correct 1+Rf/Rg. Bruce Trump and I wasted about an hour one day trying to explain that error to him with no luck.

As the author of one the book's chapter "Active Filter Design Techniques", I did advise B. Carter not to publish this nonsense, as it is simply wrong. I also advised him not to use the term "gain" repeatedly, but to distinguish between open-loop gain, closed-loop gain and loop-gain. A concept he seems to be opposed to.

Whether an op-amp circuit, (inverting or non-inverting amplifier) is stable or not, solely depends on its loop-gain, A x b, where A is the op-amp's open-loop gain and b is the feedback factor RF/(RF+RG). A very good treatise on op-amp stability is Jerald Graeme's book "Optimizing op-amp performance".

When a data sheet says "Unity Gain Stable" it is referring to the non-inverting, buffer, unity gain configured amplifier which is the least stable of all the configurations and is less stable than an inverting amplifier configured for a closed loop gain of less than 1.

Therefore if an amplifier is specified as "unity gain stable" (stable as a non-inverting buffer) it should be even more stable (further from instability) when configured as an inverting amplifier with a closed loop gain of less than unity.

Not the answer you're looking for? Browse other questions tagged operational-amplifier stability or ask your own question.

2
Cascaded vs. non-cascaded bridge-tied load circuits using opamps
28
What is noise gain, really? And how is it determined in the general case?
1
opamp output unstable
1
loop gain, open loop gain of op amp in inverting configuration (feedback capacitor)
6
How to design a circuit starting from a block diagram?
0
Ideal OpAmp differentiator stability
0
Explanation about op-amp bias resistor and bootstrapping
2
Why is CMRR defined differently in open loop and closed loop configuration of opamp?
2
Relation between the input offset voltage & intrinsic gain of a 2-stage op-amp