QAM modulation and link to AM, ASK, PAM

I am a bit confused about QAM modulation. In wikipedia, I found this:

So for example, I can imagine having two carrier signals, lets say one sine wave and one cosin wave, which are modulated either by an analog baseband message signal (analog QAM), or by a digital message signal (digital QAM).

However, in another article, I found this:

The QAM transmitter first encodes bits into complex QAM symbols, which become the complex amplitudes of baseband pulses. The baseband QAM signal then modulates a digital RF subcarrier. The digital QAM signal is finally converted to an analog drive signal by a high-speed DAC.

Also, I could also find several references linking QAM to two PAM modulations. So here are my questions:

Link to paper where I took the second reference.

Link of following quote about PAM and QAM. What confuses me is that PAM is a pulsed signal, and QAM is a sinusoid. How exactly are they associated?

To simplify the basic concept, one can think of a 16-QAM signal as being the Cartesian product of two PAM4 signals.

The first paragraph you quoted directly modulates those onto the RF carrier, by converting real and imaginary part to analog separately, modulating them onto two carrier waves with 90 degrees offset and mixing them.

The second quote describes a method where the signal is digitally modulated onto an intermediate frequency carrier (by creating two sines at 90 degrees offset in a numerically controlled oscillator (NCO), multiplying real and imaginary part of the signal separately and adding them digitally, before converting the combined signal to analog, and mixing the analog signal with an RF carrier that has been shifted by the NCO frequency.

In both cases, the mixing step uses two carrier waves of equal frequency, 90 degrees apart, and the difference is whether that step is in the analog or digital domain.

Both methods have advantages and disadvantages:

On the receiver side, the same issues apply, and there are also two ways to build them, "direct" and "superheterodyne."

PAM is basically baseband Sample & Hold for some pulse period that is a fraction of the shortest wavelength.

QAM is 4 bits encoded into a matrix of 4 amplitudes and 4 phases into a constellation of 16 stages using a coding method to scramble data with the shortest path to the next differential state using 2 signals in Quadrature than can be modulated with the following.

Wiki gives more details how this encoder works which is then used to modulate a carrier frequency. The advantage is bandwidth compression at the expense of requiring a slightly higher SNR to decode than binary according to Shannon-Hartley’s Law for the same BER. 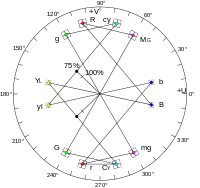 I believe you refer to Wiki - Quadrature amplitude modulation in your question.

I can imagine having two carrier signals, lets say one sine wave and one cosin wave, which are modulated either by an analog baseband message signal (analog QAM), or by a digital message signal (digital QAM).

Nearly correct. There are two carriers of the same frequency but are at 90 ° to each other and each carrier is amplitude modulated by a digital baseband signal. Hence there are two bits modulating two carriers at any one moment in time.

In effect, you are taking two carriers at 90 ° to each other but, each has an phase (180 ° or 0 °) defined by the bit stream that modulated it. Then you sum them together to produced a combined modulated carrier: - 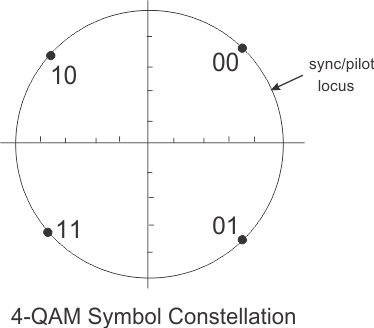 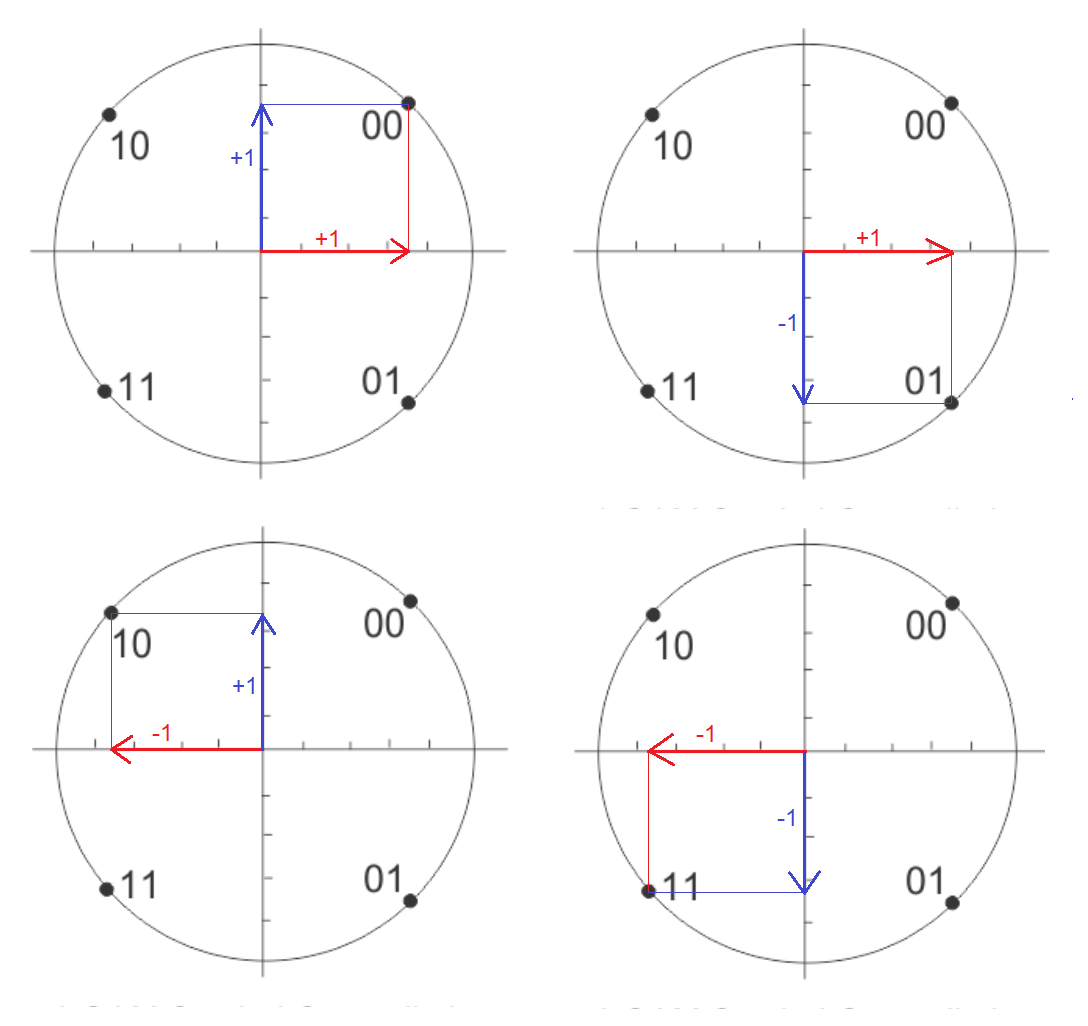 This is digital 4-QAM.

If the carriers are analogue modulated, in effect there would be many more "circles" in the picture above because, for each carrier, it can be truly varied in amplitude by its baseband signal and also inverted in phase as the baseband signal passes from a positive value to a negative value (or vice versa). There wouldn't be constellations either because the combined effect of two carriers (each amplitude modulated) produces a "dot" at any one instant in time that is anywhere within a circle of a defined maximum radius.

I don't recognize your other reference.

Not the answer you're looking for? Browse other questions tagged communication digital-communications modulation qam or ask your own question.

9
Information content of amplitude modulation versus single-sideband transmission
3
Amplitude Modulation Concepts
0
pulse amplitude modulation
2
What is the minimum bandwidth required for a digital communication system using 32-QAM modulation?
0
How does QAM retain the phase of the signals?
1
Can single-sideband (SSB) be used with PSK, QAM or APSK?
0
Is possible to modulate the upper and lower sides of a carrier with two distict signals?
3
Why do sidebands appear after Amplitude Modulation?