Initial direction of a motor

When a motor is already rotating, the rotor's mass and velocity carries a momentum and will continue to rotate in one or the other direction to align to the stator's magnetic field as the polarity of coil switches periodically.

Let's consider the simplest brush motor with only one pole as shown in the picture. If the rotor initially sits at rest in perpendicular to stator's magnetic field before current is applied, then once current is applied the rotor can either rotate clockwise or counter-clockwise to align to stator's magnetic field. The initial direction should be indeterministic (or 50% equivalent chance of rotating either clockwise or counter-clockwise).

[EDIT]
Most results I found on Google and videos on Youtube are self-contradictory or straight out erroneous.

Here I provide the diagram for Fleming's left hand rule for motor and the cross section of a 3-pole brush DC motor, where the green arrow indicates the close path of the magnetic field, and right arrow indicates direction of a conventional current. The coil wrapped around the pole (circled in red) is subject to higher current than other two poles (hence the bias). The magnetic field generated by the coil (circled in red) opposes that from the stator (dark vs. light green arrow). Rotor has to rotate then - but to which direction? 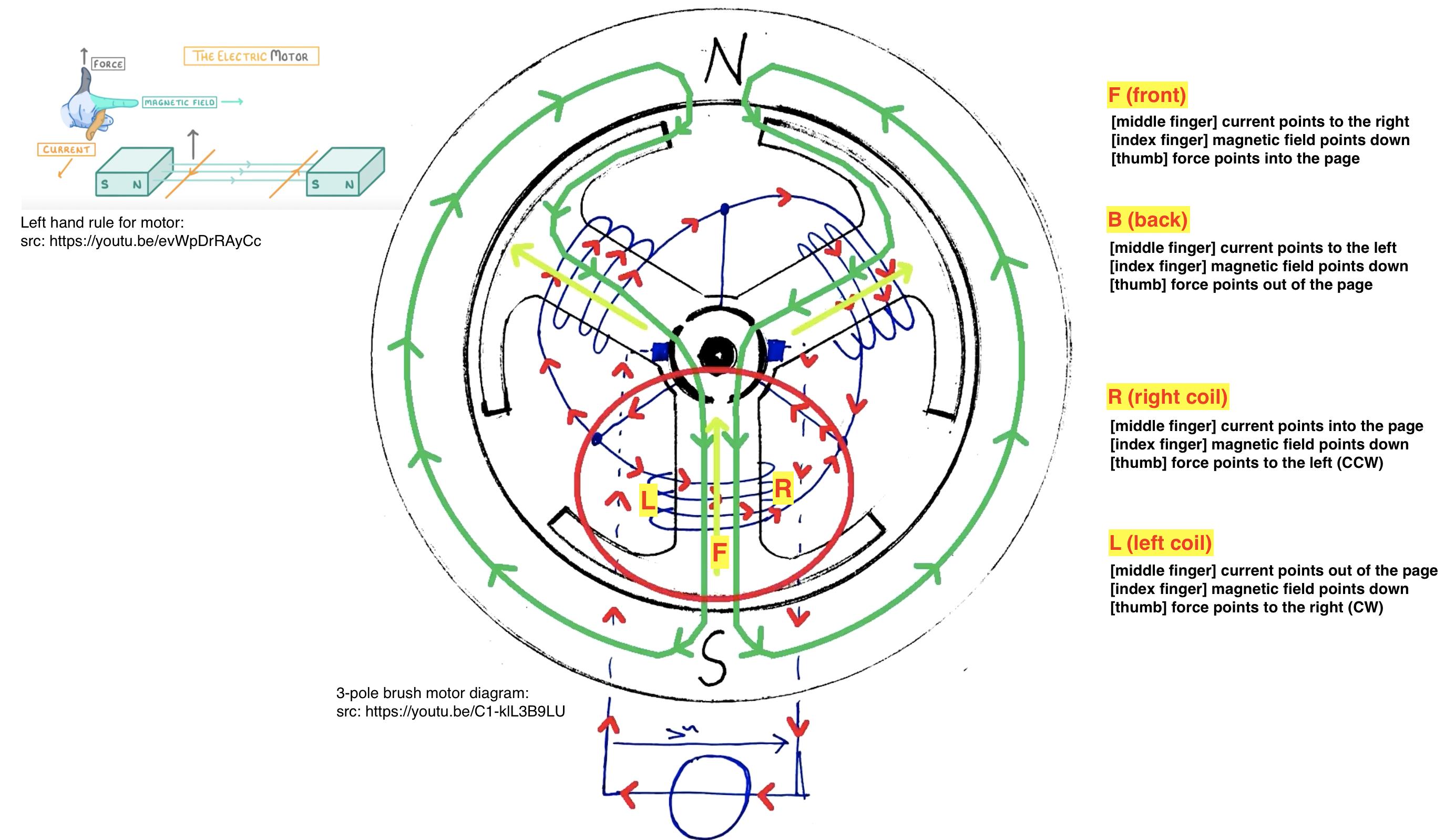 The commutator brushes are positioned so that they only energize the rotor coil that is physically more biased to align its magnetic field with the stator magnets by rotating in (say) an anticlockwise way. So it begins moving anticlockwise to make an alignment.

90° of rotation later, the brushes are no longer driving the first coil because the commutator has rotated with the rotor; they are driving the 2nd coil and it's the same scenario. That new coil is physically more biased to align its (new) magnetic field with the stator magnets by rotating in the same anticlockwise way.

The process starts over. 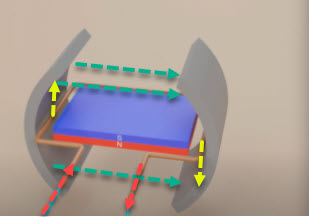 *Figure 1. In this position the rotor experiences maximum torque.

No, if the rotor in Figure 1 is rotated 90° the torques are opposing and the net rotation is zero. That's why we use brushes to switch in another horizontal winding.

The brushes commutate (switch in) a winding that will be in the orientation shown in Figure 1. 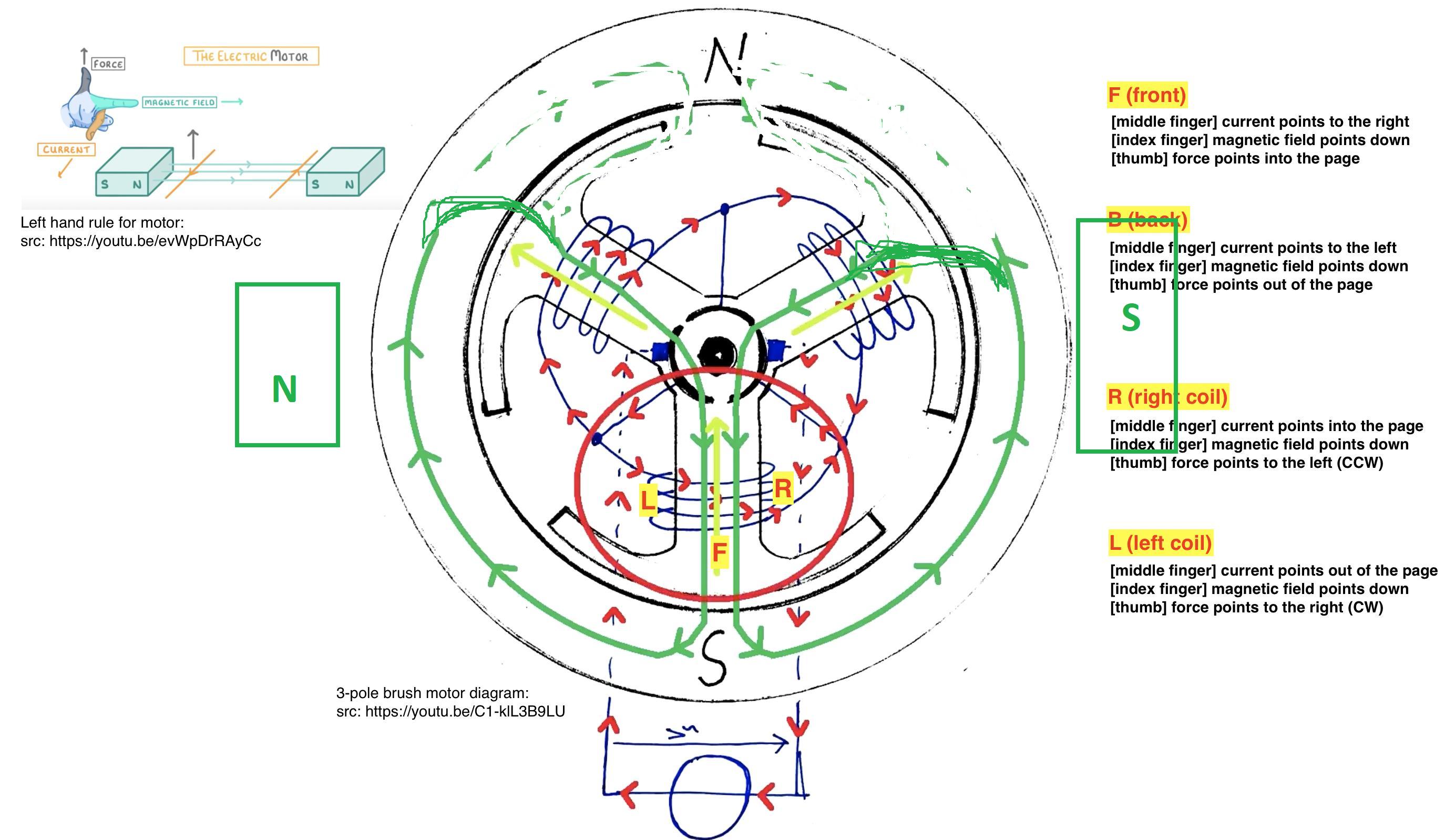 Not the answer you're looking for? Browse other questions tagged motor electromagnetism or ask your own question.

16
In a DC motor, is there one commutation point that is optimal in all respects?
3
Why does stator current increase with increasing load in a synchronous motor?
2
If single phase supply can not create rotating MMF, how does Induction motor generate torque?
3
How do single phase BLDC motors start in proper direction?
1
Shaded-Pole motor, how does it work?
0
Why can't I change the speed of an ininduction motor by changing the voltage?
2
eddy current direction
0
What is the effect of stator magnetic flux on the rotor of Synchronous motor?
0
Novel brushless DC motor design