Effect of core losses on inductance in high-frequency LC circuit?

How will the core loss (hysteresis and eddy current loss) in an LC circuit at high frequencies (about 800kHz) affect the inductance of the inductor. When I measure the frequency I can see that it will increase. Moreover the voltage will decrease (Why does this happen?).

and the capacity stays constant which means that the only way for the frequency to increase is a decrease in inductance. What exactly will make the inductance decrease and how can the reduction of inductance be calculated?

What exactly will make the inductance decrease

Consider the following tuned circuit that resonates at precisely 800.000 kHz: -

If I plot the resonance of Vout whilst changing R1 from 1k to 3k3 and then to 10k, the frequency doesn't move one little bit: -

It remains at exactly 800.000 kHz. It gets peakier as resistance increases but that's the Q factor changing; a well known phenomena. I'm showing this because it's important to realize that "resistive losses" of the type I've used above do not change the resonant frequency. Example 1.

Next, I introduce a 1 μH shorted inductor (L2) and lightly magnetically couple it to the main inductor (L1) via "K1". Initially k (coupling factor) is set to zero -

Next, consider what happens when I short the inductor using a 3 Ω resistor: -

This tells us that it isn't the eddy current losses that shift the frequency, it's the actual eddy currents themselves and the action of transformer coupling. In fact, the losses seek to reduce the extent that the resonant frequency shifts.

Hence, when you say this: -

When I measure the frequency I can see that it will increase due to core losses.

You are mistaken. It isn't the losses, it's the eddy currents themselves and not any heat (loss) generated by those eddy currents).

Moreover the voltage will decrease (Why does this happen?).

That has absolutely got everything to do with eddy current losses as my answer has tried to explain.

how can the reduction of inductance be calculated?

Well, I've used a simulator above but, to give you better advise here I need to know exactly what your full circuit is. You should also study this answer and recognize that the change in frequency is due to transformer coupling and the changes brought about when coupling varies.

As an aside to the main story and focusing on how to derive the equivalent circuit of the coupled inductors, these three scenarios below (A, B and C) are all equivalent: - 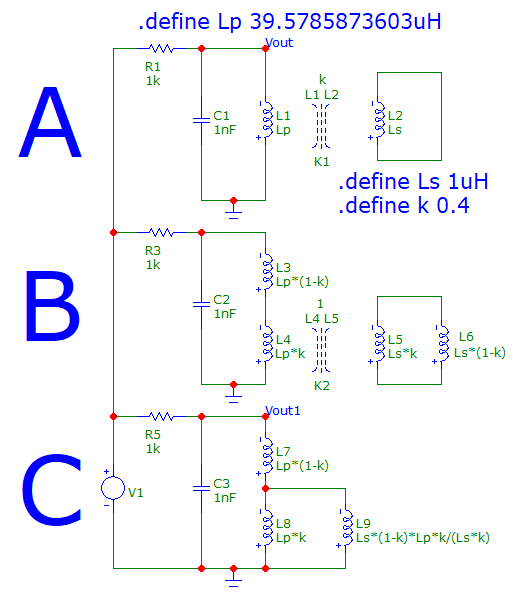 And, if you do the math on scenario "C" putting the two inductors in parallel and then putting the combined value in series with L7 you find something quite revealing; no matter what the inductance is of the shorted turn in scenario "A", the net inductance becomes: -

Hence, for this simple lossless scenario, if the "new" resonant frequency implies an inductor decrease to (say) 0.9 of its original value then k = \$\sqrt{0.1}\$.

This simple formula works when the conducting core is non-magnetic. If the core is magnetic then, there are two opposing mechanisms; the eddy current that seeks to reduce the inductance and, the presence of ferromagnetic material that seeks to increase the inductance. It can get quite complex even before losses are considered.

Many years ago, I designed metal contaminant detectors for the food and pharmaceutical production markets and, it was known that some stainless steel materials of a particular size were very difficult to detect. The reason is because the effect of eddy currents and the effect of ferromagnetism totally cancelled each other at certain operating frequencies. What remained to be detected was a pure resistive signal but, many foodstuffs are highly resistive (think saltwater) and of course the metal detectors are desensitized to avoid signals that are purely resistive in nature hence, problems!

The core losses will show up as a series resistance in the inductor. Then, you don't have an LC circuit anymore, but rather an RLC circuit. In this case, depending on the topology, the resonant frequency and the amplitude can vary. See https://en.wikipedia.org/wiki/RLC_circuit. As an example, if the circuit was a parallel LC circuit, then the addition of a resistance in series with the inductor will cause a shift in the resonance frequency given by $$ \omega_0 = \sqrt{\frac{1}{LC}-\left(\frac{R}{L}\right)^2}. $$

As the oscillations will be damped by the additional losses, the amplitude will also decrease.

There are plenty of offline and online sources available to address this, if you need more depth.

Eddy current are due to induction, which is proportional to change of the magnetic flux. At higher frequency the magnetic field changes faster, so more eddy currents, and more loss. It's a linear relationship.

At even higher frequencies the electromagnetic field can not penetrate into the whole wires (metal wires are great, but not ideal conductors), and the current will flow only at the edge/skin of the wire ("skin effect"). This loss is proportional with the square root of the frequency.

If the inductor wire is in a dielectric environment, like isolation coating or it is a planar inductor, where the substrate has a given dielectric constant and loss factor, than the changing electromagnetic field tries to rotate the dipoles in the dielectric. It requires some energy, which manifests itself as a loss from your point of view. It is also linear with the frequency.

At very high frequencies even the surface roughness of the conductor could lead to losses.

Nevertheless the main paradigm shift you need is to think about the inductor as a complex component, with series and parallel elements (Rs and Cs), instead of an ideal inductor.

Update: at 800kHz most probably only the series resistance of the wires and eddy currents in a ground plane could play any measurable role in the inductor. Plus ESR of the cap.

Not the answer you're looking for? Browse other questions tagged inductor inductance coil high-frequency loss or ask your own question.

5
Resonance of Parallel RLC circuit
1
How to calculate reduction of inductance eddy currents in ferromagnetic core?

20
How do I use a transformer as an inductor?
0
Getting resonant frequency in LC circuit with L as air core coil
12
Why do we want gap in the core material while designing inductor?
0
Can someone explain how frequency and inductance affects this pair of coupled inductors?
13
Why isn't there a non-conducting core wire for high-frequency coil applications
1
Inductance of air core coil decreasing due to ferromagnetic object put in it?
1
How to calculate reduction of inductance eddy currents in ferromagnetic core?
0
Flyback transformer size vs. core losses