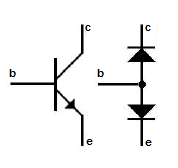 In many documents and books, the collector base junction of a BJT transistor is usually represented as an inversely polarized diode, however there is no collector base voltage that we must overcome since as soon as we apply 0.7 volts to the base the transistor already conducts between emitter and collector without offering resistance

Is the collector base junction really misrepresented as a reverse biased diode?

however there is no collector base voltage that we must overcome since as soon as we apply 0.7 volts to the base the transistor already conducts between emitter and collector without offering resistance

For a full explanation, please consult a text on semiconductor theory. What I present here is a simplification which I hope is accurate enough.

For the sake of simplicity, in what follows, when I refer to a "transistor", I will mean an NPN transistor. What happens in a PNP transistor is similar except that the roles of electrons and holes is swapped.

When the base-emitter junction of an (NPN) transistor is forward biased, electrons cross over from the N-region emitter to the P-region base. There, they are minority carriers. They don't recombine with holes in the base immediately. If the base is thin, and the average path of an electron before recombining is long enough, the electrons will reach the base-collector junction. Because they are minority carriers, they pass over the base-collector junction easily, and enter the collector. Once in the collector, they become majority carriers again, and travel freely to the metal collector terminal. That is why, when the the emitter-base junction is forward biased, current will flow from emitter, through base, into collector, even when the base-collector voltage differential is less than that of a typical diode junction or reverse biased.

The doping concentration of the collector is significantly lower than that of the base or emitter. So, for an NPN transistor, electrons easily flow in the direction just described. It is also possible for the roles of the emitter and collector to be reversed, but because the doping concentrations in the emitter and collector are significantly different, a transistor biased in "reverse active mode" doesn't have the same electrical characteristics as one in "forward active mode". Because the base is more heavily doped than the collector, it is much easier for holes to cross from the base into the collector, (when the base collector junction is forward biased) than for electrons to cross from the collector into the base. That is why the collector of a transistor does not make a good "emitter", hence why the reverse-active mode is not as widely used as the forward active mode.

The take away: When electrons cross from the emitter N-region emitter into the P-region-base, they do not recombine with holes immediately. They become minority carriers. As minority carriers, they may cross over the the base-collector junction even when or even though the collector may be at a lower voltage than the base.

In a way, the collector-base junction IS the transistor.
A bipolar junction transistor is basically a reverse polarized diode (the CB junction) whose inverse saturation current (you know, the asymptotic line of the seemingly flat portion that sits just under the negative voltage axis in the characteristic of a diode) is altered by the carriers injected by the base-emitter junction.

Consider the negative voltage portion of a diode and draw it for different values of the Isat current. You will see curves that resembles - albeit in reverse - the output characteristic of a transistor.
The missing part of the picture is a link between the collector and emitter current and that is also what allows a transistor to work as an amplifier: the diffusion current that takes place in the narrow base region allows for the decoupling of the current crossing the CB junction and the current crossing the BE junction from the respective voltages.
Note that you cannot have diffusion current in the conductor between two discrete diodes back-to-back. That's why you cannot build a transistor with two separate diodes, but need to use the same semiconductor in common with the two junctions.

The base collector junction is a legitimate diode junction. If you have a transistor you can try it out. Force a small current through it (like 1mA) or probe it with a VOM in diode mode.

Also, in saturation, the base collector junction is forward biased. This is a common mode of operation (any time a BJT is used for switching).

FYI, you can swap the emitter and collector and still have a transistor with degraded properties (low beta, for example).

Note that the transistor is NOT just two diodes. Two separate diodes would not have gain and all the other properties of a transistor.

Not the answer you're looking for? Browse other questions tagged transistors bjt reverse-polarity or ask your own question.

0
BJT transistor junctions: base-collector
5
Current through the reverse biased junction in transistor
1
How does a change in base current affect collector current once the transistor is biased
9
Why can current flow through the reverse biased base-collector junction (N-P junction) in a BJT with a forward biased base-emitter junction?
2
Bipolar transistor as a switch
0
Current flow in a BJT transistor
0
Why do electrons cross the collector-base junction and does current flow between collector and emitter?
0
How is the Collector-Base region reverse biased in Common Collector configuration of BJT?
2
Why does the Collector-Base Junction need a lower magnitude voltage to be forward biased compared to the the Emitter-Base Junction?