I'm looking for a small PCB mountable transformer which would do this job. I think that I understand the basic premise of transformers and that the ratio between the primary and secondary coils should be somewhere in the region of 1:6 to achieve this step up.

I've been looking at a variety of Flyback transformers such as this one: https://docs.rs-online.com/40b2/0900766b810a6c6a.pdf. The datasheet has a diagram as follows: 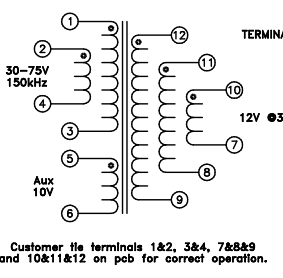 This implies to me that there are 3 primary and 3 secondary coils. I am presuming this is to allow for a variety of ratios to be used, as required. However, it is not at all clear from the datasheet what those ratios are.

Though these seem somewhat incomplete. My questions are:

Edit: It’s feasible this is an X-Y problem and there’s a better solution. I’m looking to make a ring generator for an old analogue phone. I have a prepackaged unit made by PowerDSine but as a learning exercise it seemed interesting to make one. Sample circuit I’m working off is below. I have a 12V input and a 555 + RC filter generating a decent sine wave at the frequency I want - I figured I could feed it into a couple of MOSFETs and then step up to 75v.

A 150 kHz flyback transformer is totally unsuitable. Your best bet would be to use a transformer rated at mains frequency, and run it backwards. As voltage scales with frequency, your 12 V and 75 V windings would have to be rated at a minimum of 24 V and 150 V.

A transformer rated for 120 V would probably not have sufficient headroom to over-run it to 150 V, so you would need a 240 V transformer.

Your 12:75 ratio means you'd appear to want a 240 V transformer with a rated output of nominally 38 V. However, that would be rated for step-down use, which means the voltage would be correct after losses. A higher ratio means a lower rated secondary output voltage. With a small transformer having a relatively poor regulation, you may want a transformer rated at around 30 V, for an apparent 1:8 step up.

That transformer is unsuitable for use at 25 Hz, as it says 150 kHz.

The auxiliary winding is to power up the mains side switch mode chip that drives the primary coil.

It reallly has two parallel primaries, and three parallel secondaries, and as the datasheet says, they must be paralleled, it is not for adjusting the turns ratio.

And it really has three separate windings on the same core, it does not matter where exactly they are drawn, but the aux is meant to be used on primary side so it is drawn there. The secondary has typically better isolation than aux so it is drawn alone on the other side.